In this final installment of the series on pool reactors we'll take a look at some remarkable images found in a 1956 brochure which shows some of the steps of the process in constructing the Ford Nuclear Reactor and attendant facilities at the University of Michigan.  Under the leadership of Babcock & Wilcox (today, BWXT) this 1000 KWt facility was constructed in about 19 months.  Reviewing the previous article in this series will be helpful in relating the construction photos. 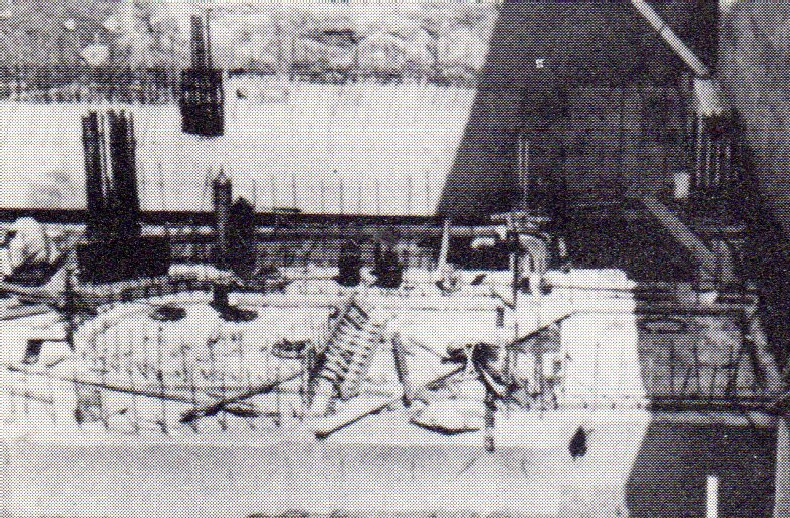 In our first photo, construction of the Ford Reactor facility is well underway. Here, the roughly horseshoe shaped foundation for the reactor pool can be made out; normal operating position for the core will be at the left or rounded end of the pool. In this photo the lab and administration building would be to the right. 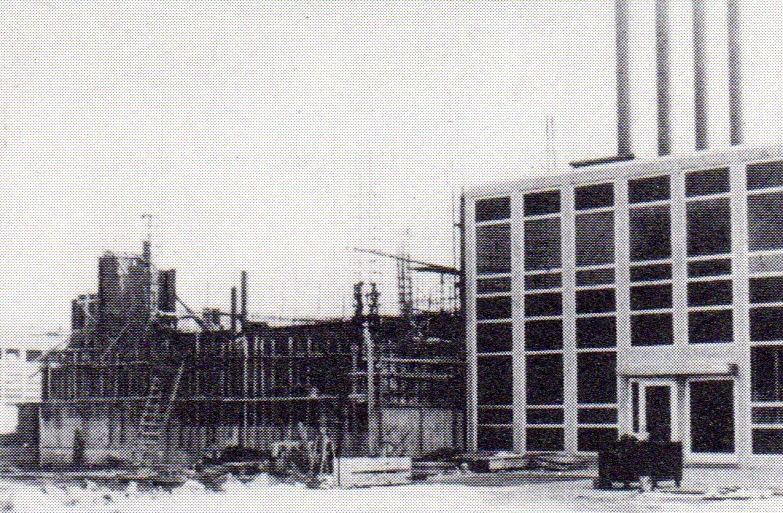 In this view the construction of the reactor building itself, comprising the left portion of the photo, continues while the adjoining building appears virtually complete. The reactor building had foot-thick reinforced concrete walls. Perhaps "has" would be better since this facility is still standing today, although without an operational reactor. 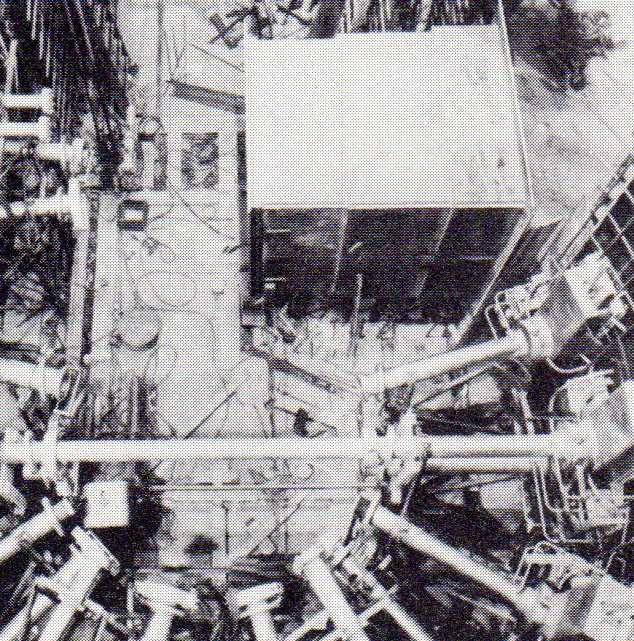 In this mostly straight down view, a variety of beam tubes (the pipes in a half circle) can be seen converging at the location of the core when in operation. The large structure dominating the upper portion of the photograph is the thermal column, comprised of a 9 ton shell and 12.5 tons of graphite bricks. The purpose of this structure is to thermalize, or slow down, neutrons for research purposes outside the pool structure. This column was protected on the outward side by a large, heavy shielded door. However, this column could not be used with the core in the position at the bottom of the picuture; the core had to be beside the column, and in that location further beam tubes can be seen directed at the gap between the thermal column structure and the pool wall. For thermal neutron research the core would be moved to this position by the mobile bridge and operated here. 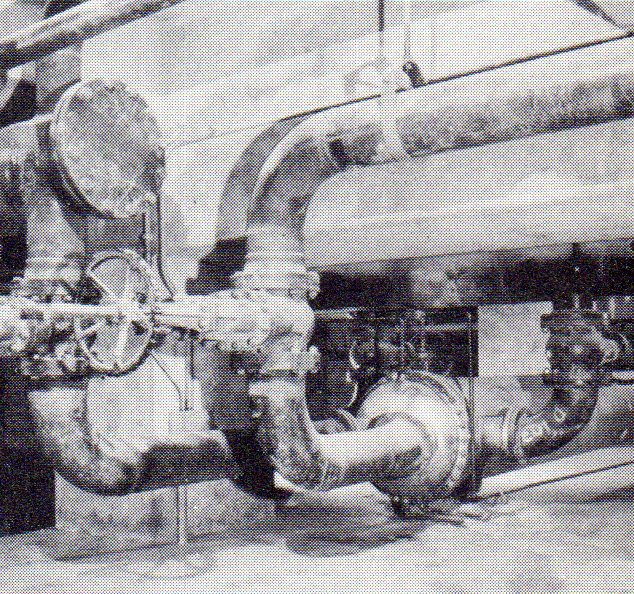 The Ford Nuclear Reactor had what we might call more than one operating mode.  As can be seen from the above picture, the core could be positioned by the bridge crane and operated at the convergence of a large number of beam tubes in order to maximize research potential; a pneumatic rabbit tube system was also installed for quick experiments.  However the core could also be moved beside the thermal column for thermal neutron work.  There were also two modes of cooling; the reactor could be cooled just by convection at low power, but a forced cooling system using a heat exchanger in the basement of the structure (shown at left) and outdoor cooling tower could handle power outputs up to 1000 kilowatts.  These considerations made the Ford Nuclear Reactor facility versatile, and advanced for its day. 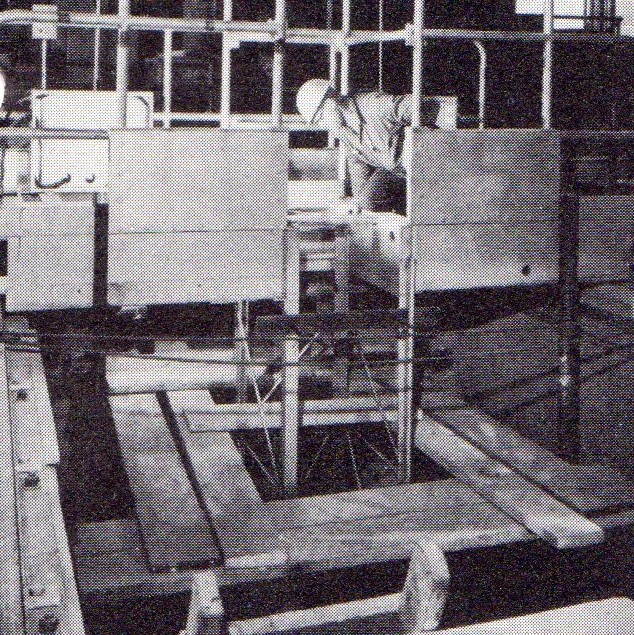 As with all pool reactors the core of the Ford Nuclear Reactor was suspended in the pool water by a rolling bridge crane and attendant core support structure.  Above, we can see the bridge crane in the final stages of assembly; one of the rails on which it rides just protrudes into the left of the picture, while the arms to support the core can be seen dropping through the wooden scaffold platform near the center of the photo.  In the photo below we see the lower end of those arms which are holding the core support plate, or "grid plate."  The plate, at this point with no other equipment installed on it, is sitting at the normal full power operating position by the majority of the beam tubes. 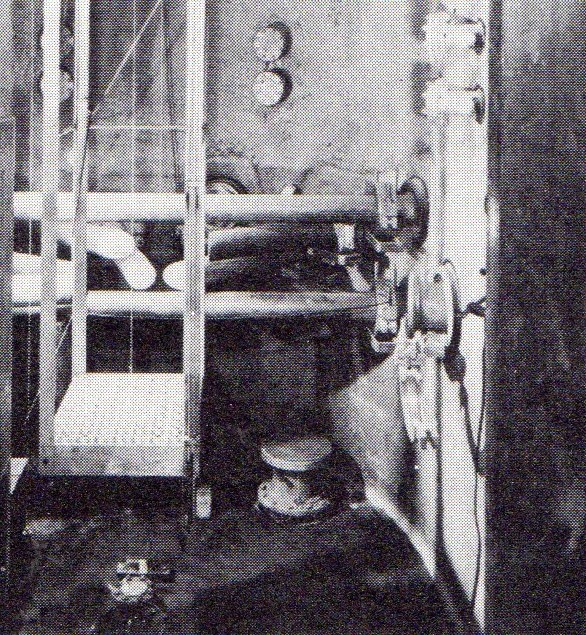 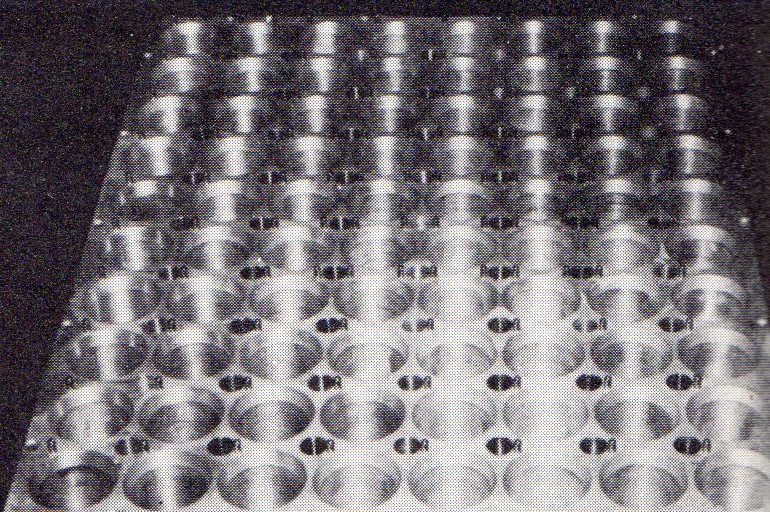 While plain training reactors were built and intended to operate with just a single core configuration, most pool type research reactors were built with a flexible arrangement in mind; that is to say, they were set up to allow a variety of core / fuel and experiment configurations, and versatile instrumentation in and near the core.  All of the instrumentation for monitoring and controlling the reactor as well as the control rod drives were suspended from the bridge crane.  At left we see the brand-new grid plate for the Ford Reactor in close-up.  This plate had 80 locations which could accept fuel elements, graphite reflector elements, or instrumentation.  According to the brochure, unused openings were plugged to force coolant to the fuel elements; additionally the plate had another 63 small openings which allowed smaller amounts of water to pass through for cooling the fuel element exterior. 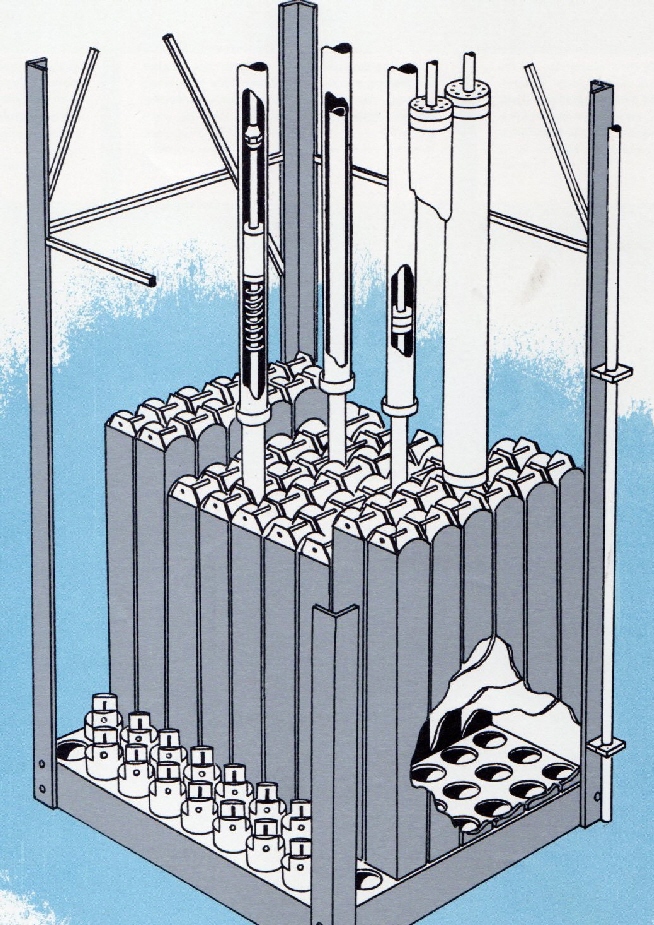 This beautiful illustration from the same material shows a core assembled in operating configuration on the grid plate, complete with fuel elements (note the grapple fixture or "handle" at the top of each square-section element) as well as control rods and nuclear instruments. 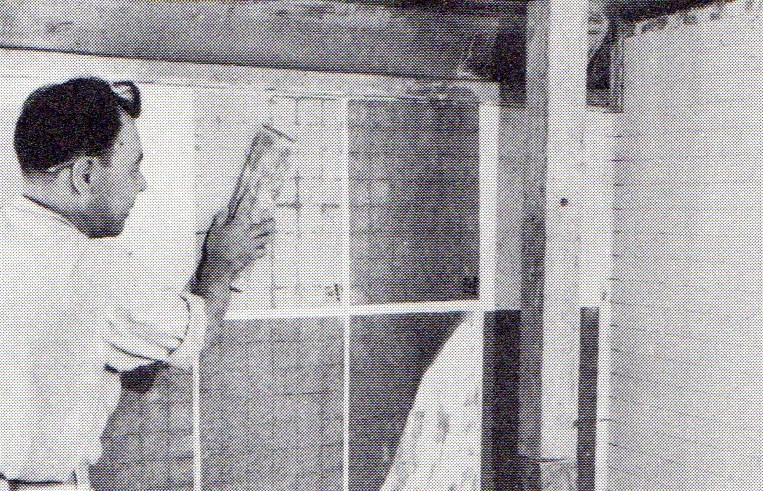 Here's a job most of us can relate to - applying grout to ceramic tile! The entire interior of the Ford Nuclear Reactor's pool was covered with a durable ceramic tile capable of enduring the abuse of a high radiation environment. The light-reflecting tile was also intended to be easily decontaminated. 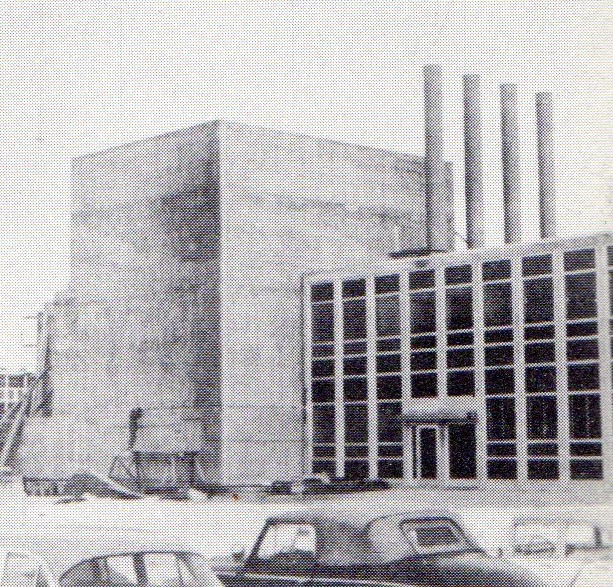 The Ford Nuclear Reactor facility nears total completion in this view. The reactor facility was not in an entirely unpopulated area and was not surrounded by any sort of restricted zone - so it had to be designed as a gas-tight structure. Doors into the reactor building as well as ventilation dampers were all designed to seal tightly when closed.

I hope you've enjoyed this three-part look back at a very humble, but very necessary part of the nuclear technology history of the United States and, for that matter, much of the world.  The pool reactor, made inexpensive by design and through the use of then-available off the shelf critical components such as fuel and instrumentation, was the training and research tool that opened careers for thousands and thousands of professionals in the field.  It's worth noting again, as at the start of this series, that the pool reactor isn't just a thing of the past, either; it may come back, this time as a district heating machine in cold climes.  Certainly the advantages of simplicity and ease of construction so clearly shown during the 1950's and 1960's have not been forgotten, and we may yet see the pool reactor make a triumphant return to a stage widely, and noisily, occupied by much newer, more advanced and more exotic actors.  Perhaps in a way that return would be fitting, and welcome.

(Illustrations in this installment come from the remarkable brochure, "The Babcock & Wilcox Company Builds a Research Reactor," published late 1956.)