In the last half of 1968, Public Service of Colorado obtained the necessary approvals from the US Atomic Energy Commission and from the Colorado Public Service Commission to begin the actual construction of its Fort St. Vrain Nuclear Generating Station. 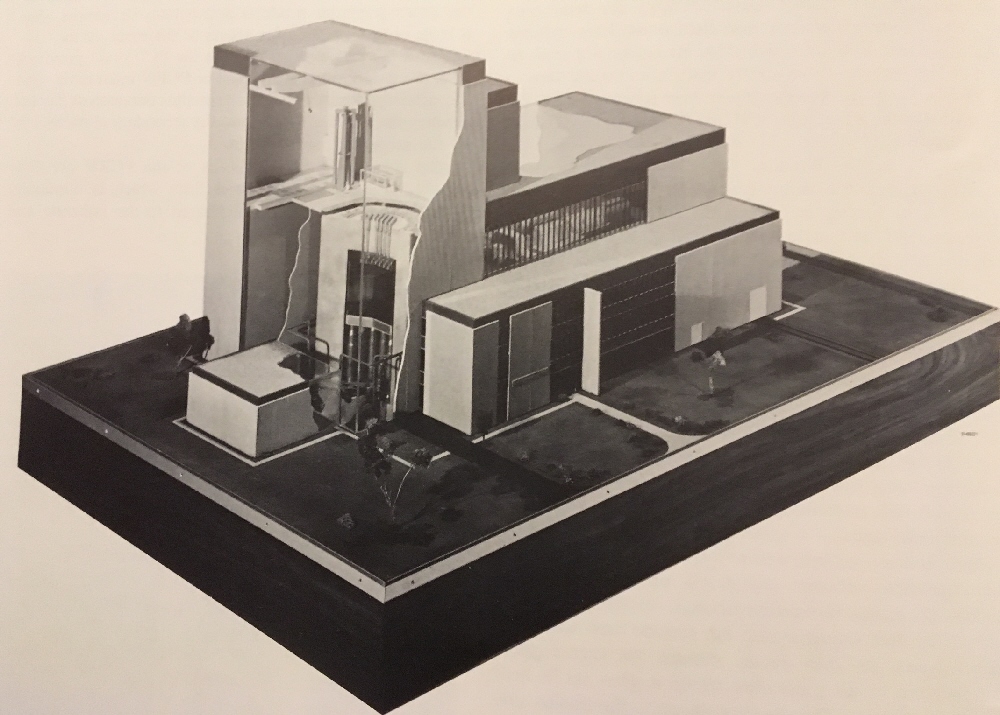 Above, the design developed for the Fort St. Vrain station is again represented in model form.  The reactor building is nearest, with the reactor core itself visible as a dark half-cutaway cylinder in the center of the heavy prestressed concrete reactor vessel or PCRV.  The turbine building stretches out to the right of the photo, with administrative and staff facilities built out in front connected to the road by the sidewalk visible on the model. 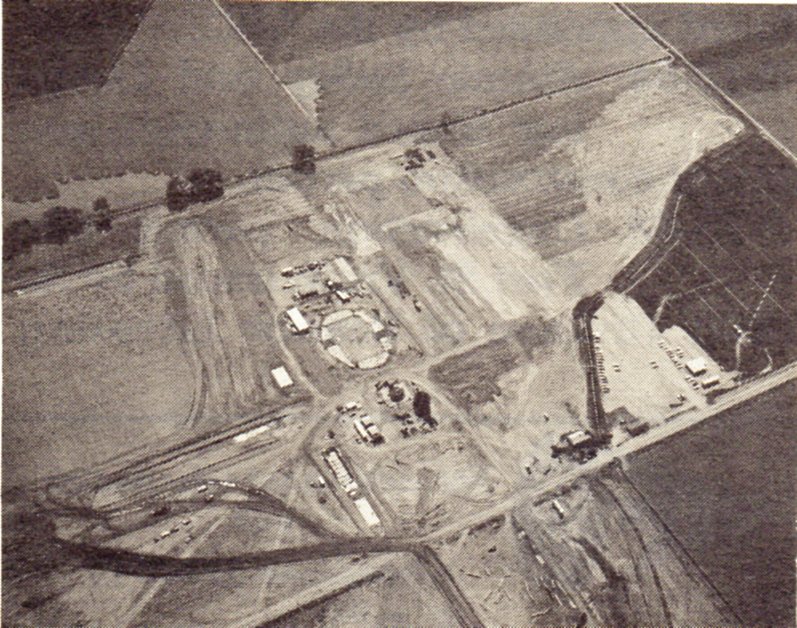 In the view above, County Road 19-1/2 cuts through the photo from the lower center to the right; we are looking roughly East here from the air.  The plant's site can be seen as the area near the center of the photo where a rough oval appears; this is the location of an ice wall constructed to hold back ground water encountered on the drive down to bedrock.  A creek runs along the site, which is visible as a dark line near the right middle of the photo.  Two spurs from the Union Pacific railroad enter the site from the West. 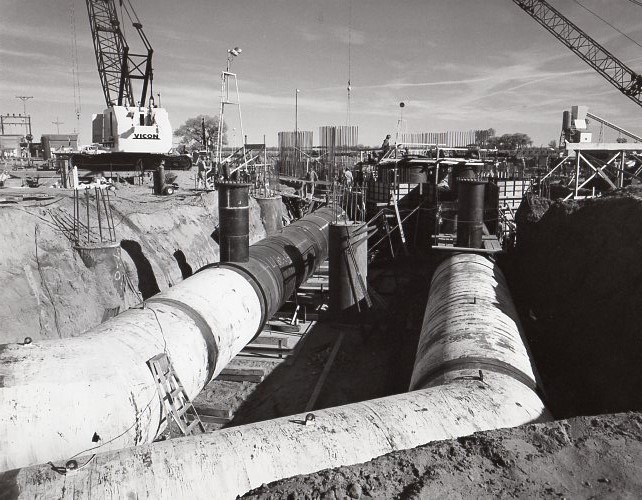 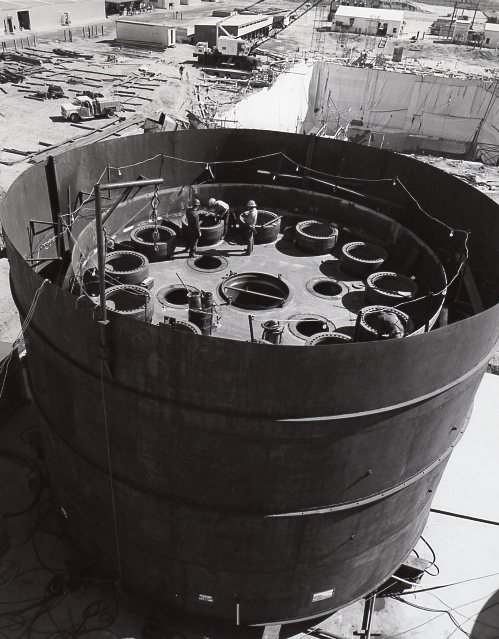 (Although General Atomic - who was bought from General Dynamics by Gulf Oil in 1967 - was the prime contractor for the plant and point of contact for the owner, Public Service of Colorado, it did not work alone.  GA hired Sargent & Lundy as architect-engineer for the project, and hired EBASCO Services as constructor.)

The specific piece seen above is the lowest steel component that will sit inside the PCRV cavity.  The circular openings around the edge are for the 12 steam generator modules; the four inner ones are for the helium circulators, and the central opening is the manway access to the lower PCRV area for inspection and maintenance.  Workers standing on the lower head liner give sense of scale. 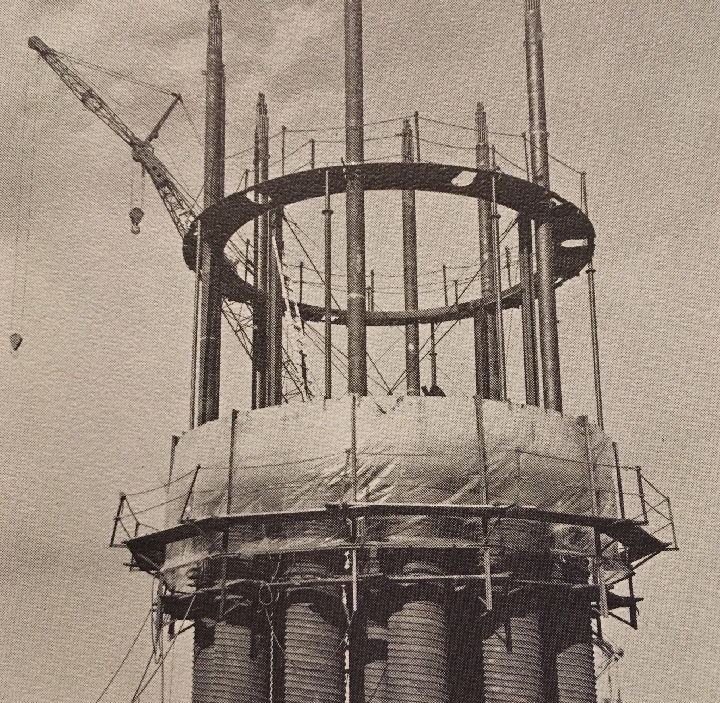 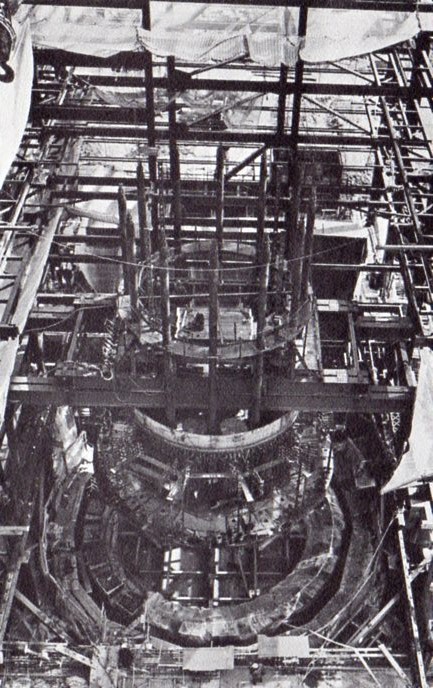 "Aerial view of the bottom head assembly before it was lowered into final position."

"Bottom of Reactor Vessel Placed at Fort St. Vrain:  The huge bottom head assembly was placed into its final position at the Fort St. Vrain Nuclear Generating Station on Friday, February 21.  The 400 ton piece of equipment, which is the lower portion of the vessel which will contain the plant's nuclear fuel, had to be moved some 200 feet horizontally from its point of fabrication into position above its supporting foundation.  From that point, it was lowered 20 feet into final position on the foundation.

The 48-foot diameter assembly stands some 60 feet high.  It was moved horizontally by a gantry crane.  The gantry traveled along steel rails, pulled by steel cables attached to a 150-ton crane that provided the motive power.  Jacks on the gantry crane lowered the assembly into its foundation.

Substantial headway is being made at Fort St. Vrain.  In addition to the fabrication and placing of the bottom head assembly, considerable progress has been made upon foundations for the reactor and turbine buildings, and the placing of the concrete for the pedestal upon which the plant's turbine generator will be placed.

Approximately 500 men are at work at the plant site, four miles northwest of Platteville.  Fort St. Vrain is expected to go into operation in 1972." 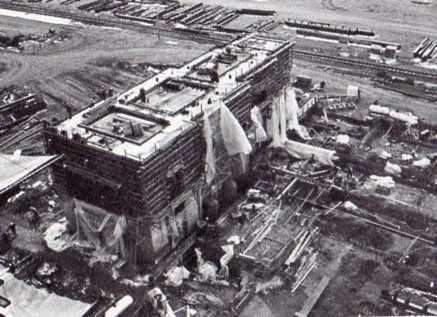 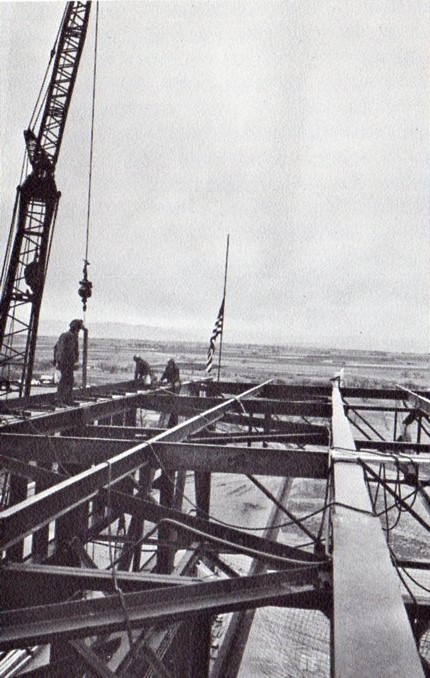 The photo above shows the placement of a US flag erected on the reactor building at the time of the placement of the last, highest structural steel.  The construction of the reactor building was completed in April 1969, as was the construction of the turbine generator pedestal.  However, much work remained to be done and by June 1, 1969 the contractors considered the project 28% complete; this level of completion was attained in roughly eight months. 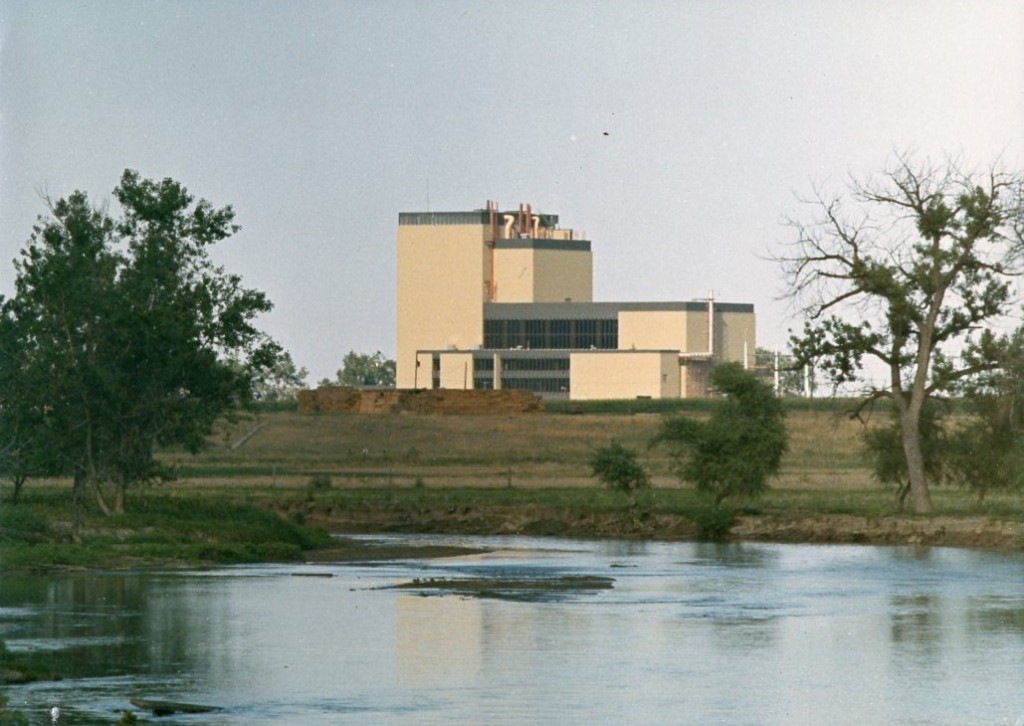 Fort St. Vrain, like many other plants of its day, would not meet its original schedule.  The plant was essentially complete and ready for hot testing in 1972 but was not granted an operating license by the Atomic Energy Commission until December 1973.  Many hurdles would have to be overcome during the unfortunately and unexpectedly protracted run up to commercial operation, but many of these were overcome.  In our next and final installment we'll take a look at the plant's operational history and provide some historical perspective.