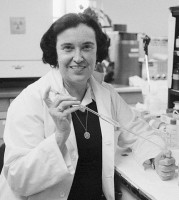 Rosalyn Sussman Yalow was a medical physicist and won the 1977 Nobel Prize in Physiology or Medicine along with her partner Solomon Berson for the development of radioimmunoassay (RIA).

Born in 1921 in New York City, Dr. Sussman Yalow became interested in mathematics and chemistry at an early age. She attended Hunter College, which was an all-women's college at the time (it is now part of the City College of New York). There, she earned a degree in physics, which had been newly created as a major during her senior year. Particularly fascinated with rapidly-evolving field of nuclear physics, and she later noted that in the late 1930s, "physics, and in particular nuclear physics, was the most exciting field in the world. It seemed as if every major experiment brought a Nobel Prize."

However, Dr. Sussman Yalow wasn't convinced that she could get into graduate school as a woman. Even her parents recommended that she conclude her academic career and become a teacher. In her last semester she started a part-time secretarial job for Dr. Rudolf Schoenheimer, a biochemist at Columbia, and started business school after graduating in January 1941. Nevertheless, she continued to pursue her dream of a career in physics and applied to graduate school. She received a teaching assistantship in physics at the University of Illinois at Urbana-Champaign, where she would become the only woman in the college of engineering at the time.

As the physics major was only created in her last year at Hunter, Dr. Sussman Yalow's physics background left her behind many of her first-year graduate student peers. To catch up, she took undergraduate courses for no credit while balancing a full graduate course load and a half-time teaching assistantship. She noted that her A- in optics laboratory (in addition to an A in the lecture portion) prompted the chair of the physics department to tell her "that A- confirms that women do not do well at laboratory work" *

After completing her Ph.D. in nuclear physics in 1945, Dr. Sussman Yalow moved to New York with her husband Aaron, who was also a physicist. She worked briefly as an engineer at the Federal Telecommunications Laboratory, and then began teaching physics in a pre-engineering program at her alma mater, Hunter College. Instead of undergraduate women, she taught veterans returning from the WWII. By this time her husband, Aaron Yalow, was working as a medical physicist at Montefiore Hospital in the Bronx. Through him, she met "The Chief", Dr. Gioacchino Failla. He recommended to the Bronx Veterans Administration Hospital that Dr. Sussman Yalow be hired as a consultant on a new radioisotope service, which she did part-time between December 1947 and May 1950.

After the spring semester of 1950, Dr. Sussman Yalow left Hunter College to work full time at the Bronx VA Hospital. There, she teamed up with physician Dr. Solomon Berson to research new applications of radioisotopes, such as the kinetics of iodine metabolism. Their partnership lasted 22 years, until his death. Together, they invented radioimmunoassay (RIA), an extremely sensitive technique to measure substance concentrations by comparing radiolabeled and unlabeled antigens for specific antibodies. RIA can measure picograms of material in a milliliter of blood, and is used in both hormone and immune research.

For her role in developing RIA, Dr. Sussman Yalow won the 1977 Nobel Prize in Physiology or Medicine, along with endocrinologists Roger Guillemin and Andrew V. Schally. Solomon Berson died in 1972, and thus was unable to receive the award along with her. Dr. Sussman Yalow was given the title of Distinguished Service Professor at the Mount Sinai School of Medicine, which was affiliated with the Bronx VA Hospital. She was a member of the National Academy of Sciences and received many honors, such as the William Middleton Award for Excellence in Research (the highest honor of the VA Medical Center), the National Medal of Science in 1988 and five honorary doctorates.

Yalow often mentored young women in science, including Mildred Dresselhaus and Frieda Stahl at Hunter College. She officially retired in 1992 and became Senior Medical Investigator Emerita at the VA Hospital where she had spent most of her career. She died in 2011 at the age of 89 and is survived by her two children, Benjamin and Elanna.

* It is unclear exactly when this comment was made to Dr. Sussman Yalow, so it could be attributed to either famed physicist F. Wheeler Loomis, namesake of the University of Illinois physics building (Loomis Lab), or Gerald Kruger, who became acting department head during the war while Dr. Loomis was at the MIT Rad Lab