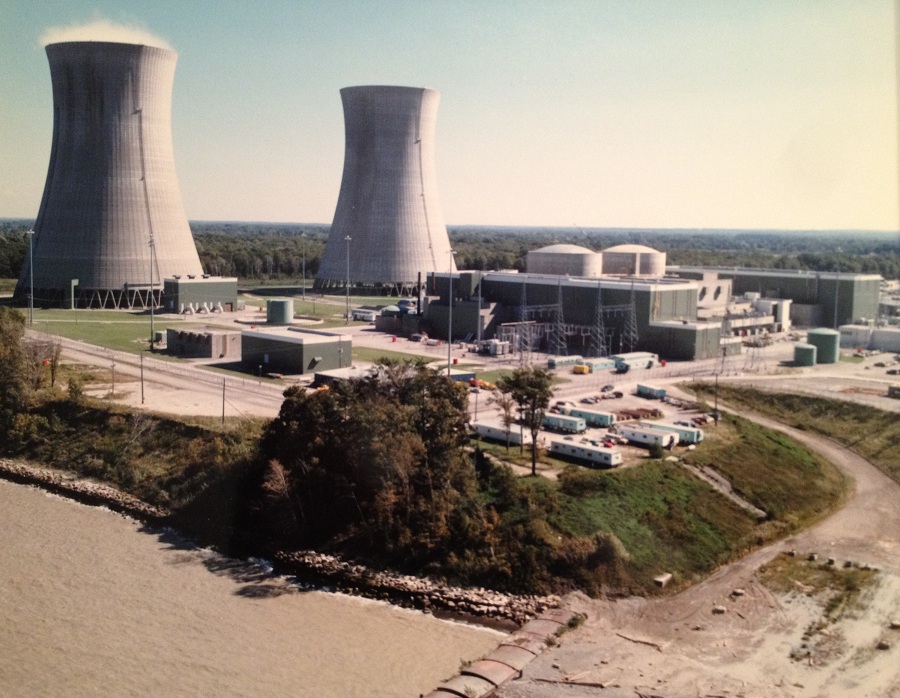 Perry Nuclear Plant in Ohio. Nuclear plants create no emissions of their own; the cooling towers emit only water vapor. Press photo in Will Davis collection.

One of the things that's important to consider this week - National Clean Energy Week - is whether or not energy sources we depend upon are actually clean.  While we think of solar and wind energy as being pretty clean, we are also reminded that they are not reliable, and they do experience periods of time when they just don't work.  What we use to fill in that power gap is from sources we can control, independent of weather or time of day. These are sources we call "dispatchable" generating sources, because we can dispatch them and expect they'll answer the call to provide power.

While hydroelectric is sometimes considered dispatchable, it's limited in where it can be built.  That leaves prime movers or primary energy sources - and that traditionally is coal-fired or oil-fired steam electric-generating plants, or natural gas-fired combined cycle generating plants, or else nuclear.  If we're worried about keeping our air clean then we must acknowledge that coal, oil and natural gas all have emissions.  Sure, the emissions from some are worse than others and there are indeed a number of efforts underway to try to cut that down, but only one - nuclear - emits no gases to the environment in the process of generating electricity. 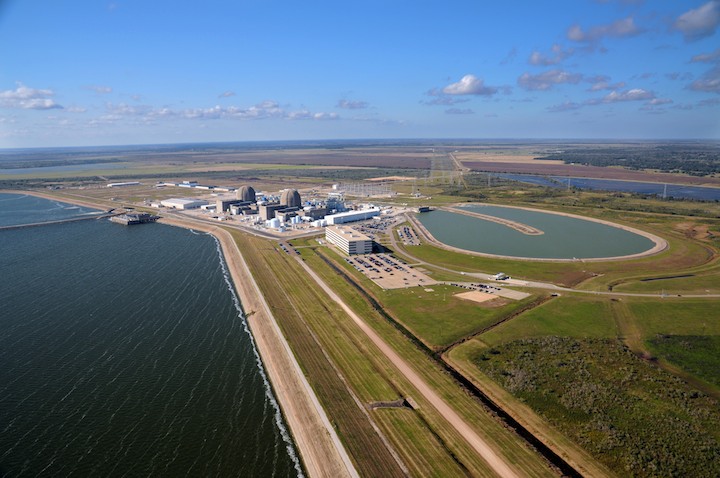 The air is clean and clear above the South Texas Project. Photo courtesy STPNOC.

About 60 percent of the emission-free electric power generated today in the United States comes from nuclear power.  And it isn't as if everyone isn't in agreement - organizations from the U.S. Department of Energy's Office of Nuclear Energy all the way to the Union of Concerned Scientists say unequivocally that nuclear energy is low emission, with no greenhouse gases emitted by the plant during power generation. Plus, according to the UCS, nuclear energy emits "very few life-cycle carbon emissions" - which means that the process of constructing and fueling nuclear plants is comparatively emission-free when coal, oil and gas are brought into the mix.  In fact, the operation of the nuclear plants in the United States (instead of using fossil fuel to generate the same total amount of electric power) prevents the emission of over two billion tons of carbon dioxide every year - to say nothing of other pollutants also released by some fossil fuels. 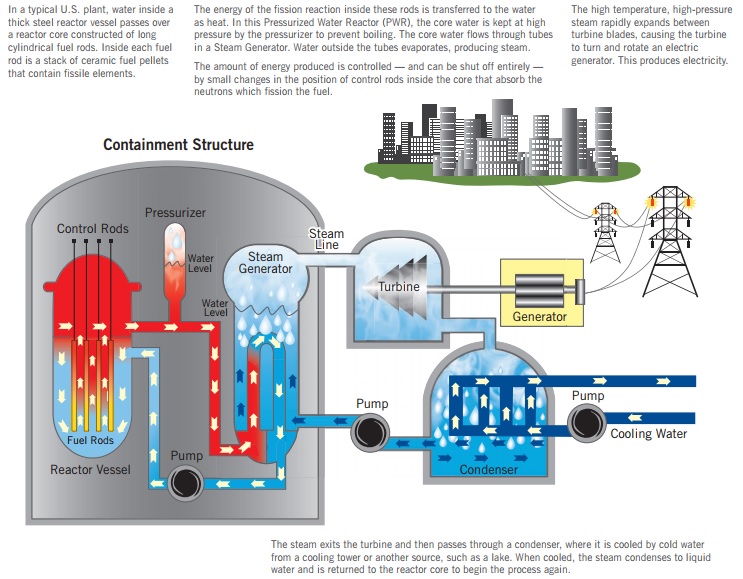 Why don't nuclear plants emit any gases while generating electricity? Simple - they don't take in any air to burn, and because of that they have no exhaust. The energy from nuclear plants doesn't come from a chemical reaction between a fuel and oxygen in the atmosphere; it comes from the splitting of uranium atoms. No air in means no exhaust out! A typical PWR (Pressurized Water Reactor) power cycle is shown in an illustration from the ANS Center for Nuclear Science and Technology Information site.

Why don't nuclear plants emit any gases while generating electricity? Simple - they don't take in any air to burn, and because of that they have no exhaust. The energy from nuclear plants doesn't come from a chemical reaction between a fuel and oxygen in the atmosphere; it comes from the splitting of uranium atoms. No air in means no exhaust out! A typical PWR (Pressurized Water Reactor) power cycle is shown in an illustration from the ANS Center for Nuclear Science and Technology Information site.

Naturally, this revelation leads us to wonder what damage other fossil fuel engines might be creating - engines like those in cars, trucks, lawn mowers, and trains.  While it's not likely that these will be replaced soon (because we'll continue to need vehicles to work in demanding and/or emergency situations) we might consider that if the world begins to shift to electric powered vehicles, such as battery or hybrid cars and electric trains powered from overhead wires, we'll need to consider a further shift to nuclear so that we don't drive up emissions from the dispatchable sources that'll be needed to power the huge fleet of electric vehicles.  That's right - nuclear energy might well be the key to truly clean transportation, at some day in the future.

As mentioned earlier, every single power source we might consider will have some emissions during the creation of all the material and technology required simply to design, construct and fuel that source.  This holds true for everything, from solar to coal to nuclear - all of them.  But it's important to point out that a nuclear plant's whole life cycle leads to the generation of roughly 17 tons of carbon dioxide for every gigawatt-hour of electricity actually generated.  How does that stack up?  Well, it's 600 tons of carbon dioxide per gigawatt-hour for natural gas plants.  For coal, it's a whopping 1000 tons.  When we compare nuclear power's 17 tons per Gw-hr to wind power (which has roughly 14 tons per Gw-hr) we see how clean nuclear really is.  When we look at the fact that nuclear is "always on," well, the combination of cleanliness and reliability makes nuclear a winner.

Florida Power & Light's St. Lucie nuclear plant. Not only is this plant greenhouse gas-free and very low in life-cycle total emissions, but it and several others recently stood up to a major hurricane. Resilience is important in securing a bright energy future. (Photo courtesy FPL.)