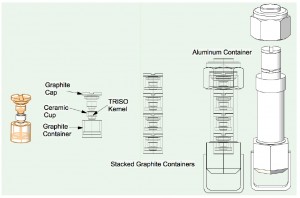 "This is a first-of-a-kind PIE process for us," said Heather Chichester, director of the Post-Irradiation Examination Division at the Materials and Fuels Complex.

Prior to re-irradiation in NRAD, this fuel was first irradiated in INL's Advanced Test Reactor (ATR) for 3.5 years. However, before researchers could ship this fuel from ATR to MFC for analysis, the fuel was placed in a cooling pool at ATR. It can take several months for decay heat from the fuel to diminish sufficiently for transport. During that period, short-lived fission products undergo radioactive decay. Through a 4-day re-irradiation in NRAD, short-lived fission products were regenerated and scientists could quickly access the fuel for analysis before these fission products decay into other elements or isotopes.

"To use NRAD to re-irradiate fuel and have it already in our main PIE facility is invaluable," said Chichester. "We are able to measure those quickly disintegrating fission products right after re-irradiation." 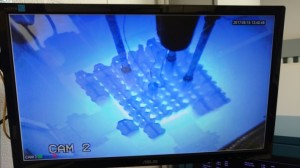 INL has studied the irradiation performance of TRISO fuel for the Advanced Reactor Technologies Program within the Department of Energy (DOE)'s Office of Nuclear Energy. During safety testing at INL and Oak Ridge National Laboratory at temperatures roughly 200°C higher than predicted accident temperatures, this TRISO fuel has been shown to withstand extreme heat without significant loss of fission products.

"TRISO fuel from this program has previously been tested and shown to withstand temperatures in excess of 1,800°C with only minor degradation," said John Stempien, nuclear fuels engineer for the program. 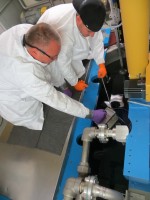 "What has yet to be accomplished in this program is the study of short-lived fission product behavior in TRISO fuel, specifically iodine-131 and xenon-133," said Stempien. "This is important for safety analyses."

With all TRISO layers intact, the fuel does not release fission products iodine or xenon. In order to collect information on the central fuel kernel's ability to retain fission gases, researchers crushed four TRISO particles prior to re-irradiation. This process broke the TRISO coatings, allowing fission products to escape the kernel at elevated temperatures for measurement. The four crushed particles were loaded into individual holders and re-irradiated for four days in NRAD. From NRAD, the particles were transferred into the hot cell and loaded into a furnace where researchers could measure the release of fission products at accident temperatures. 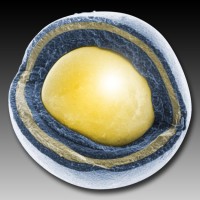 TRISO fuel is made up of poppy-seed-sized multilayered particles. In the center, the spherical fuel kernel - consisting of a mixture of uranium, carbon and oxygen - is enveloped in layers of carbon and silicon carbide, which make up its TRISO coating. Thousands of TRISO particles can be formed into fuel assemblies in different ways such as cylindrical fuel pellets (called "compacts") that can be loaded into hex-shaped graphite blocks to form the core of a prismatic helium-cooled high-temperature gas reactor or as tennis-ball-sized spheres for use in a pebble-bed HTGR. Recently there has been interest in applying TRISO fuels to light-water reactors and salt-cooled reactors.

Although a big first step, the NRAD and PIE teams are already looking forward to the next step. "We are planning to develop procedures for the re-irradiation of an entire fuel compact (containing up to several thousand particles) in NRAD," said Stempien.

"Due to the short-lived nature of some of the fission products of interest, having the NRAD reactor co-located within our primary PIE facility is instrumental for performing quick PIE. Establishing this capability gives us the ability to provide unique data," said Chichester. "We're able to gather valuable new information about TRISO fuel performance, and this is just the beginning."

Nora Imholte is a communications specialist at INL's Materials and Fuels Complex.