Should We Worry About Radioactive Fallout From North Korea?

The Democratic People's Republic of Korea (DPRK), often referred to as North Korea, is testing ballistic missiles capable of reaching California with a miniaturized atomic warhead. Neither component is fully developed yet.

From successful atomic bomb tests, to putting satellites into orbit and launching missiles from a submarine, DPRK's modern weaponry has gone from a joke to something very serious.

Like their recent hydrogen bomb test that wasn't a hydrogen bomb, their latest missile test wasn't as long-range as the DPRK claimed. But it was an intermediate-range that could reach its neighbors easily.

It will still be some time before the DPRK can seriously threaten the United States mainland, but our allies nearby to DPRK are quite worried, especially given the scary and escalating rhetoric coming out of the White House.

If our nuclear umbrella works as designed for an attack from the DPRK on South Korea or Japan, there will be more than just a few nuclear detonations that would follow as the political, industrial, and military centers of the DPRK were obliterated.

I've been getting a lot of questions about what would happen after that. Even though the immediate destruction dwarfs anything that follows, most people's minds bring up images from science fiction-that those areas would be dead zones, uninhabitable for thousands of years from radioactive fallout. And that fallout might reach Hawaii, Alaska or the U.S. mainland.

Fortunately, that's not true. Radioactive fallout is not a common result from using nuclear weapons. It's the pressure and the heat, the blast and the fireball, that do all the damage, not radiation.

In the decades following WWII, we spent lots of time and money researching the effects of nuclear detonations, particularly fallout. The generation of fallout is inversely proportional to destructive power, which means that if you want the biggest bang with the most destruction, which is the whole point of using such weapons, you won't generate much fallout.

In over 200 above-ground atomic and nuclear bomb tests, fallout was minor in 99 percent of them. Residual dose rates from these test sites are very low (< 0.001 Sv/yr), less than the natural background radiation that was there before the tests.

The exception was the Castle Bravo test on Bikini Atoll that generated lots of fallout that caused radiation sickness in people of the Marshall Islands because it was incorrectly detonated too close to the ground and the yield was larger than we expected. At 15 megatons (equivalent to 15 million tons of TNT), that hydrogen bomb was the largest detonation ever by the United States, a thousand times larger than anything the DPRK has or will probably ever have.

Therefore, if an enemy wants to care about contaminating the future more than winning the present conflict, there could be areas that will be contaminated for a long time, although not thousands of years because geological and biological processes spread out and dilute contamination relatively quickly.

A good way to understand this problem is to look at the only two atomic weapon attacks in history. Little Boy, the Hiroshima U-bomb, was about 15 kilotons, and Fat Man, the Nagasaki Pu-bomb somewhat similar to DPRK's bombs, was about 25 kilotons. There are no areas in either city, or anywhere else in Japan, that have radioactivity above background levels as a result of those detonations. There never were any dead zones.

More than 200,000 deaths occurred at Hiroshima and Nagasaki from those detonations. About 500 deaths came later from radiation-induced cancer and other long-term effects from this microsecond neutron burst. None were from fallout.

The mess this world might be heading toward is much more complicated than science fiction, but radioactive fallout is one of the least of our worries. 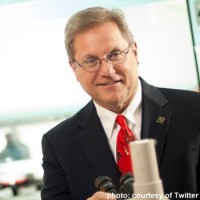 Dr. James Conca is a geochemist, an RDD expert, a planetary geologist and professional speaker.  He is also a regular contributor on Forbes. Follow him on Twitter @jimconca and see his book at Amazon.com.