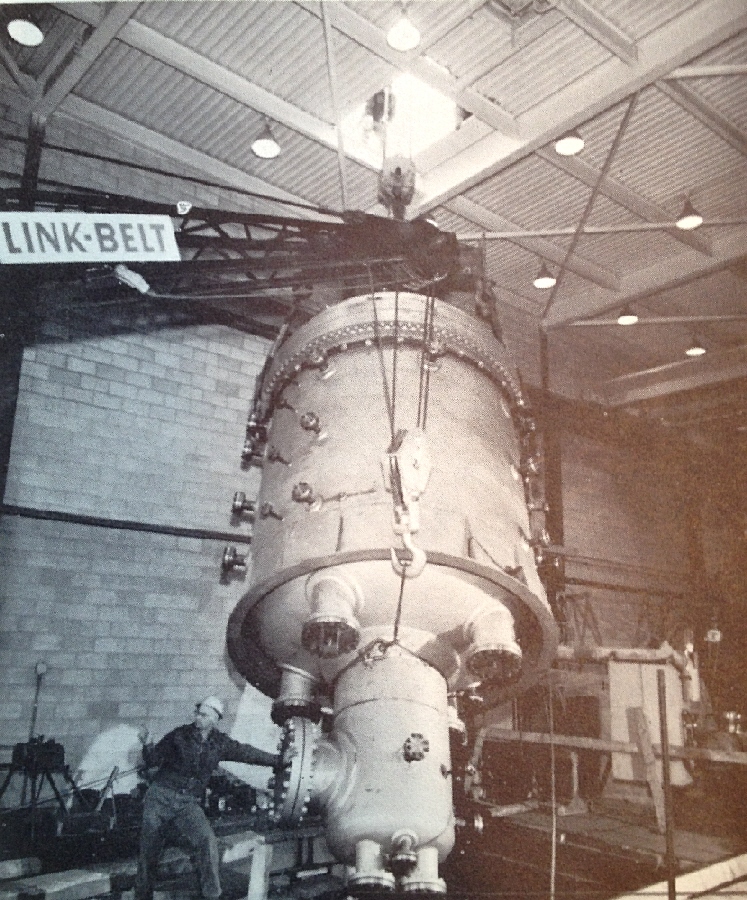 McFarlane noted that while his presentation had in its title the number 52, indicating the number of reactors historically built and operated at what was formerly the National Reactor Testing Station (NRTS) Idaho, that number is really "kind of arbitrary," as he put it.  "Some reactors were just rebuilt some and then given a new designation and counted toward the 52, while others were reconfigured many times and never redesignated."  However, McFarlane added, the number of 52 reactors was at least a mostly historically accurate and roughly dependable figure.

The remote desert location somewhat near Idaho Falls was originally chosen, according to McFarlane, because the US Atomic Energy Commission (and to an extent Argonne National Laboratory, headed at that time by future first ANS President Walter Zinn) wanted to construct and test new and novel kinds of nuclear reactors whose exact behaviors could not at that time be accurately predicted.  For this purpose a former naval artillery test range was chosen - a range large and remote enough that any public population center would not be threatened by any radiological releases should one occur.

McFarlane also noted to the full meeting room of roughly 60 attendees that the Idaho site chosen was in many other ways ideal.  The site, he said, has a large aquifer which can be used for cooling water; it was also large enough (at 890 square miles) to allow multiple contractors and operators to have their own locations, free of interference from any others.  (This would in fact later be the case.)

According to McFarlane the first reactor planned for construction at the new location, in 1949, was the Argonne National Labs' Experimental Breeder Reactor.  Following the construction of this plant, Argonne later moved to another zone on site, called "Argonne West," for construction of further reactors.

There were a broad variety of designated uses, one might say, for these reactors, according to McFarlane.  Some were built, he said, for testing of safety features; some to develop and prove marine (Navy) propulsion; some to test nuclear fuels and nuclear plant materials.  Still others were built as straight demonstrations of concepts, while others were built as very narrowly focused experiments.  Space propulsion as well as aircraft propulsion were tested, as were reactors for general military uses.  Finally, some were built simply as support for larger reactors (critical assemblies being one example.) 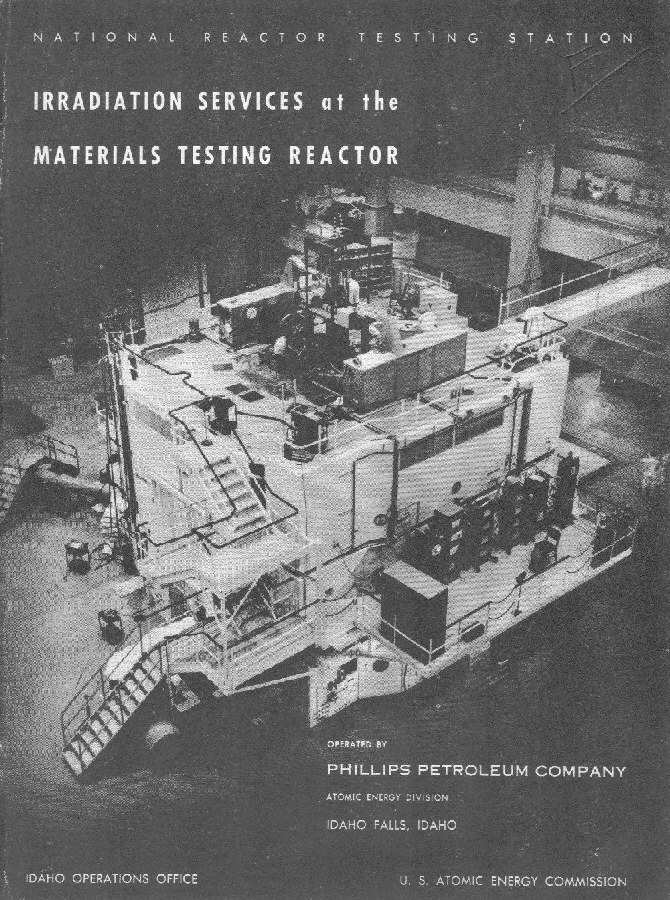 Materials Testing Reactor brochure; this historic Idaho reactor was the first to use plate type fuel and led to a whole family of reactors using "MTR type" plate fuels. Brochure in Will Davis library.

McFarlane more than once during his presentation observed the very serious contribution that the range of Idaho reactors has made to commercial nuclear energy, saying at one point that in terms of materials and of safety information that "commercialization of nuclear energy just would not have been possible."

Of course, the major project for which the NRTS became known early was that which saw the construction of the STR or Submarine Thermal Reactor, later redesignated the S1W plant, as the first prototype for a nuclear power plant for submarines.  This plant, built north of the Argonne West site, was put into operation in 1953.

Nuclear plant safety, said McFarlane, would not be where it is today without the pioneering efforts of a number of Idaho reactors.  The LOFT or Loss Of Fluid Test reactor facility, comprising a containment and a nuclear steam supply system that could be moved into and out of the containment on a rail system, was used to actually test reactors in loss of coolant and loss of flow tests.  Core damage could then be examined after the test.  McFarlane noted the SPERT range of reactors, short for Special Power Excursion Reactor Test, in which a series of four different reactor designs was put through very high power transients to determine fuel effects and damage.  (These were just north of the Army Reactor Area.)  He also showed one of the now famous photos taken during the expression of water and steam from the top of one of the dramatic BORAX destructive reactor tests and explained that these tests were an essential step in the commercialization of the boiling water reactor concept. 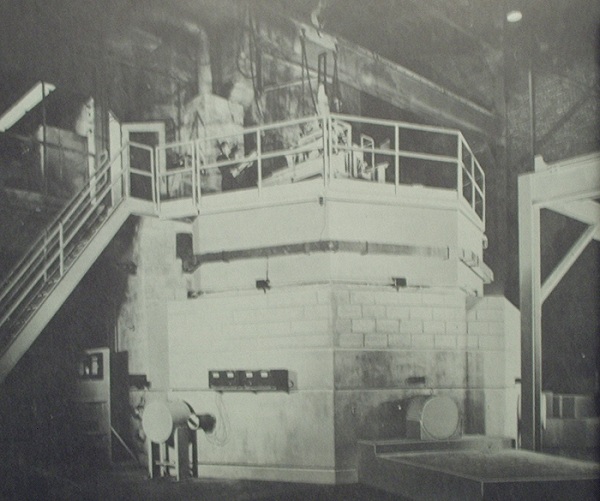 View inside Experimental Breeder Reactor facility(later called EBR-1) from the 1950's. From brochure in Will Davis library.

The testing of fuels and materials, said McFarlane, at Idaho was both one of the earliest tasks given any of the reactors and the only task still really being performed by the few operating reactors left.  He briefly mentioned the MTR or Materials Testing Reactor, which operated 1952-1970; the ETR or Engineering Test Reactor, operated from 1957 to 1981 and the Advanced Test Reactor or ATR, put into service in 1967 and still operating to this day.  McFarlane said that "we simply could not have qualified all the fuels and materials we needed for nuclear energy without the experience gained from these reactors." 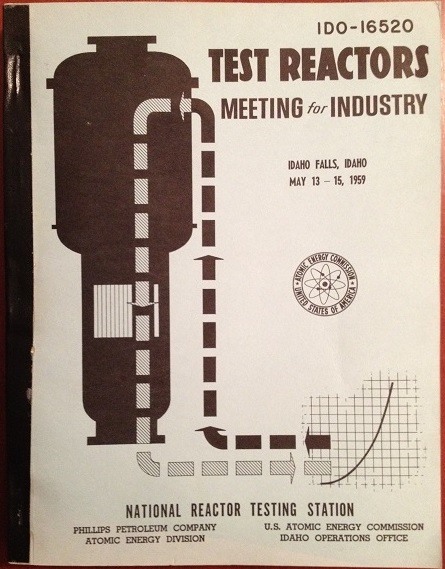 "Test Reactors - Meeting for Industry," published 1959 proves that some influential meetings were actually held at the site. Large book of papers on test reactors; delivered at NRTS, now INL in May 1959. Will Davis library.

McFarlane observed that many of the 52 historic reactors have been completely removed (adding as a byproduct a rich base of knowledge in plant decommissioning) although he noted that many of the Idaho plants "weren't built to last a lifetime - they were just built to prove a concept or test a theory."  However, one of those 'old reactors,' the TREAT or Transient Reactor Test Facility has been 'on standby,' or mothballed for years according to McFarlane who says there are plans to bring that facility back into use perhaps by 2018.  Of course the ATR still operates as does its critical facility; the NRAD or Neutron Radiography Facility (which incorporates a 250 KW TRIGA reactor) is also still in operation.

McFarlane also reminded the assembled ANS members that the INL may not be done with prototype reactors just yet; he observed that if plans work out there will be the first NuScale Small Modular Reactor being built at the site perhaps in the 2024 time frame, continuing the pioneering spirit of the historic site and family of "Idaho reactors." 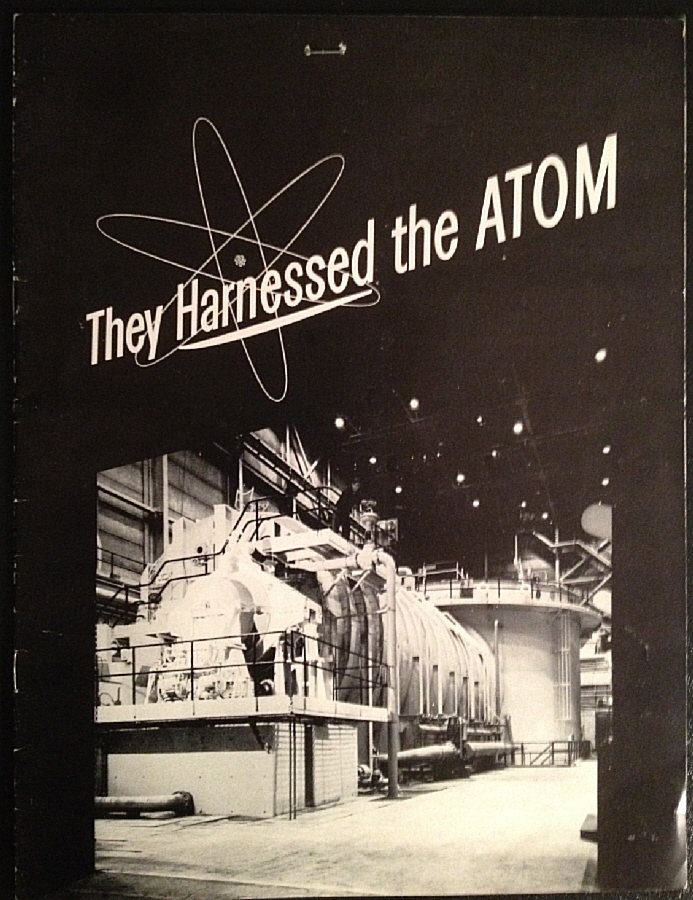 Will Davis is Communications Director and board member for the N/S Savannah Association, Inc. He is a consultant to the Global America Business Institute, a contributing author for Fuel Cycle Week, and he writes his own popular blog Atomic Power Review. Davis is also a consultant and writer for the American Nuclear Society, and serves on the ANS Communications Committee and on the Book Publishing Committee. He is a former US Navy reactor operator and served on SSBN-641, USS Simon Bolivar.  He is reporting from the ANS Winter Meeting in Las Vegas.

From refugee in Bangladesh to top nuclear engineer at Idaho National Laboratory, ANS member Yasir Arafat has led quite an interesting life, as described in a recent online profile written by...