by Will Davis; information for this report obtained both from the 2016 ANS Annual Meeting session on Prototype Gen-IV Reactors and from representatives of the Korea Atomic Energy Research Institute (KAERI), its subsidiary Sodium-cooled Fast Reactor Development Agency (SFRA), KEPCO Engineering & Construction,+ and Argonne National Laboratory. 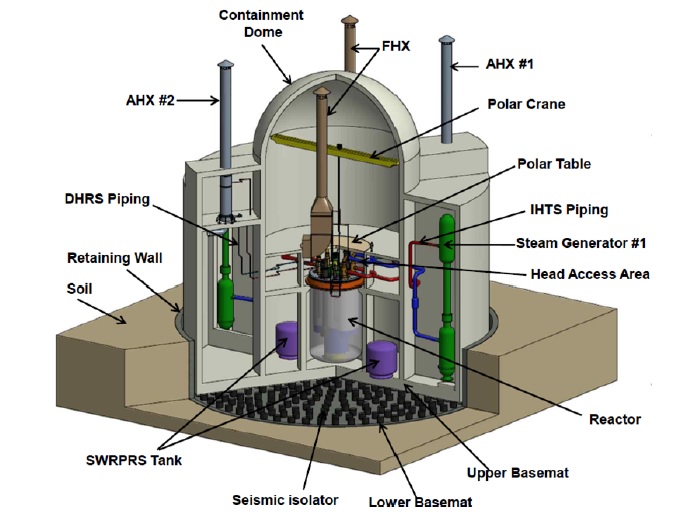 According to figures provided by the Korea Atomic Energy Research Institute (KAERI), South Korea's extensive and growing fleet of conventional, light water power reactors faces a looming concern.  At present, roughly 700 metric tons a year of used nuclear fuel is being accumulated at the sites of the 23 operating nuclear units.  This has already amounted to 14,000 tons of material being stored, which has filled about 75% of the present storage capacity.  It's estimated that four of the operating sites will reach their capacity to store used fuel in the time frame of 2024 through 2028.  By the year 2023, because of the addition of further nuclear units, the annual accumulation will reach 1000 metric tons and if allowed to build up in the present manner the total would approach about 90,000 metric tons by the year 2100 (assuming of course that new storage is constructed.) Clearly, then, Korea needs to address the problems of this buildup.

Korea imports about 97% of its energy resources (data from Sodium-cooled Fast Reactor Development Agency or SFRA), which of course has historically been a major motivation in Korea's vast application of nuclear energy.  It's obvious that the used nuclear fuel accumulating at the nuclear plant sites has further energy potential, and Korea can tap this potential by burning the material in advanced or "Generation IV" ("Gen-IV") reactors designed for just such a purpose.  SFRA estimates that only about 1/20 the waste would need to be stored long term (as in an underground repository) if a closed fuel cycle that burned the used light-water reactor (LWR) fuel in Gen-IV reactors were implemented.  Further, the radiotoxicity of spent nuclear fuel is such that it only lowers to the level of natural uranium ore in about 300,000 years -- but the waste from a fast reactor that has burned LWR fuel only takes about 300 years to reach natural levels.  From multiple standpoints, a "closed fuel cycle" wherein LWR fuel is then re-used in advanced reactors makes a great deal of sense.  This is why Korea has been working steadily toward developing such a reactor since 1997.

The Tuesday session on KAERI's  Prototype Generation-IV Sodium-cooled Fast Reactor (PGSFR) provided a number of direct updates on the development of this crucial technology.

The first presentation (by Tae-Wan, Kim) gave a broad overview of the project status, being carried out by the SFRA or Sodium-cooled Fast Reactor Agency, which itself is a semi-autonomous agency within KAERI.  SFRA itself was organized as recently as 2012, and has the purpose of designing, funding and managing development of the sodium reactor's nuclear steam supply system (NSSS), the balance of plant portion as well as components and related technologies.  KEPCO Engineering & Construction will be responsible for designing the overall plant, as is the custom with all present Korean nuclear projects.

Mr. Kim pointed out that South Korea presently does not have a detailed licensing process for such a nuclear plant project, and that SFRA and KAERI are working with the national regulator through sharing of information in order to push the licensing process along.

It was also revealed that the exact site for the PGSFR prototype plant has not yet been determined.  According to KAERI experts present, it is preferable to have a seaside location both from the point of having cooling water available and for the transportation of large components.  It is planned to have site specific data (hence, a site picked) by the end of 2017 or the first half of 2018, they said.  Further, the construction permit is hoped for in 2022 and the PGSFR plant should be completed in 2028.

It's also necessary to develop the actual construction technology for such plants - and Korea doesn't yet have it all.  Locally, according to Kim, it's possible to build in all likelihood the reactor vessel, the vessel head and the reactor internals, but international help is being sought on the steam generators, primary coolant pumps, and fuel handling equipment.  Most of these components could initially be fabricated abroad, he said, at least initially. 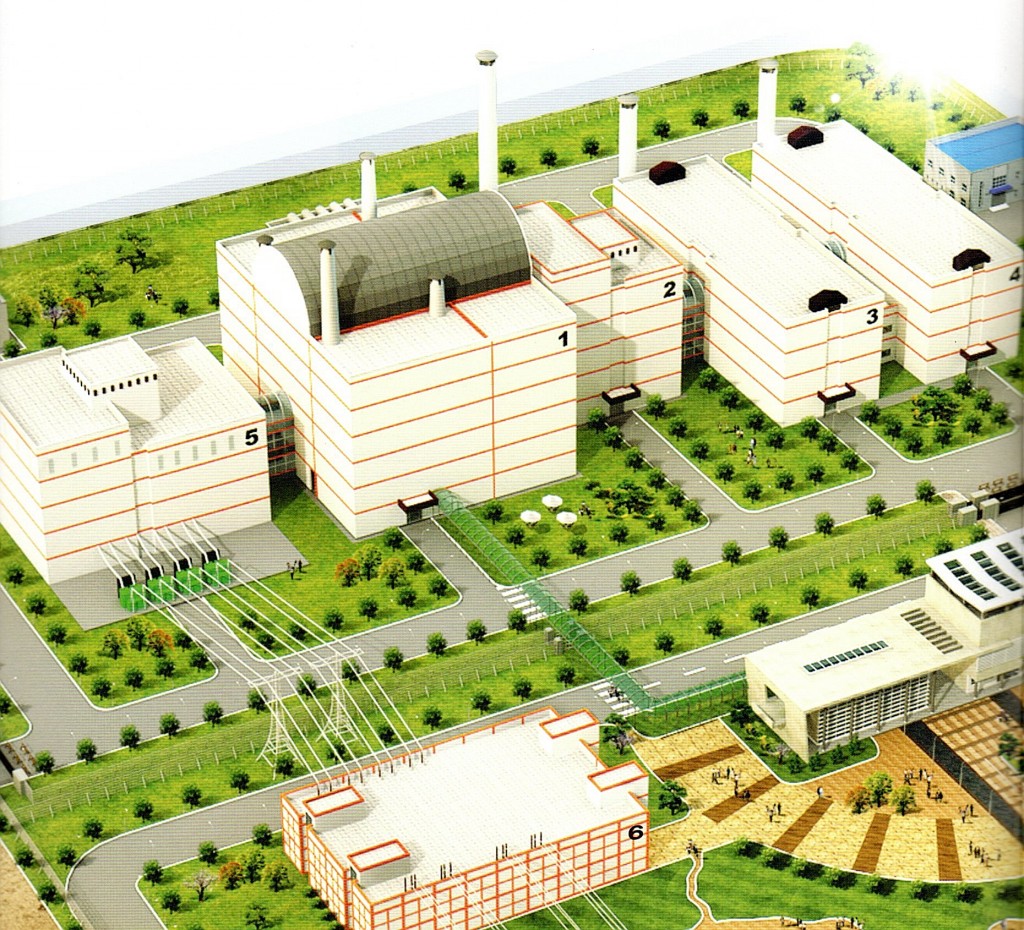 Jaewon Yoo gave a very interesting presentation on the development of the actual plant.  He remarked that the reactor will have four safety trains - two active, and two passive - but that there are no credible events that could lead to any sort of high pressure release of materials to the environment since the sodium filled primary plant is operated at atmospheric pressure.  Special care will be taken in the design to ensure that sodium and water cannot mix; there is both an intermediate cooling loop, and gas inerting of spaces.

The 400 MWt / 150 MWe plant is, he remarked, on schedule toward the preparation of a specific design safety analysis report.  According to Jaewon Yoo, the reactor will operate at a higher temperature than previous sodium cooled reactors, and this will require the development of new fuel and cladding material - just a part of the complicated development of a safety analysis.

In the interest of safety, the entire nuclear containment and the surrounding auxiliary building will be constructed on one large seismically isolated base mat.  He mentioned that the design of this particular structure is not yet finalized; for example, he noted, the sodium-water reaction pressure relief tanks will be located outside of the auxiliary building in the next design revision.

Richard Vilim of Argonne National Laboratory gave a presentation on the control of the plant, and noted that in this type of reactor, "power follows flow," which means that the reactor power can be adjusted somewhat by changing the flow rate of sodium through the reactor instead of by moving control rods.  He said that the steam plant will operate at a constant steam temperature, and very interestingly, when pressed by an audience question, stated clearly that the plant will be set up to have remote dispatching capability.  This means that the power of the plant can be ordered by and changed by the grid operator.

WHAT PGSFR IMPLIES FOR THE FUTURE

At the moment, Korea's 1-2-3 agreement with the United States doesn't yet allow it to carry out full reprocessing of used nuclear fuel from its fleet of light water reactors.  Pyroprocessing, an electro-chemical means of separating the materials out of used nuclear fuel to obtain those of further interest, is beginning to be tested in Korea (with serious work beginning next year at KAERI's Daejon, Korea facility) but is not yet demonstrated there.  Until the process is proven, and until the 1-2-3 agreement with the United States is fully amended to allow the processing of used nuclear fuel, the full benefit of the PGSFR and of course following (potential) fleet of waste-burning SFR's remains a vision of the future.

If that vision is realized, Korea will achieve several important things for itself nationally.  It will achieve a closed fuel cycle, extracting maximum energy from available materials.  It will minimize the final amount of high-level waste to be permanently stored.  It will broaden its technological base, and theoretically develop an important export advantage should it choose to fully commercialize the process for export.  It will also add flexible power generation to its ever-growing grid, which will in part be getting its fuel from what had been waste, and which will be of the utmost safety as stipulated by its true Gen-IV design.  We can only hope for future generations that these goals are realized -- and, given the rate at which Korea is growing and the rate at which LWR fuel is piling up, sooner rather than later. 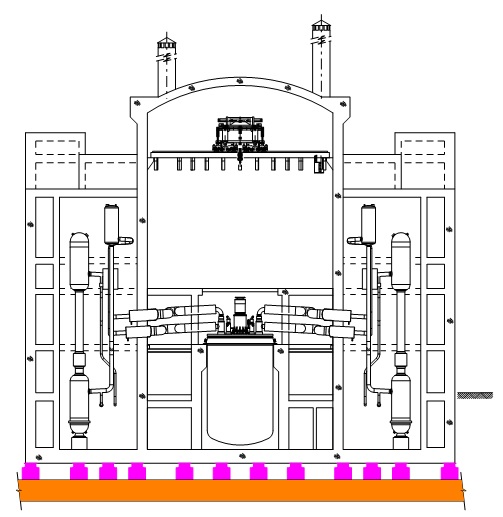 PGSFR Reactor and Auxiliary Buildings, courtesy KAERI / SFRA. Notice the distinctive auxiliary building wrapped completely around the (central) reactor building, with both mounted on a single, contiguous seismically isolated basemat. The nuclear steam supply system, as well as many of the auxiliary systems, are thus all kept from moving relative to each other in case of an earthquake and are isolated as much as possible from the motion to the same extent. This is part of a growing trend in nuclear plant construction.

•The United States once had such a program, but it was slowed to a crawl in the late 1970's and finally killed off some years later.  Read about that, and more, at this link.

A multi-ministry task force has been established by the government of South Korea to promote the export of nuclear power development projects. The task force, led by minister of trade,...

South Korea’s new president, Yoon Suk-yeol, appears to be following through on his campaign pledge to reverse the previous administration’s domestic nuclear phaseout plan. Earlier this...