As we come to a completion of Women's History Month, we at the American Nuclear Society would like to celebrate one of our own Women in History - the first female ANS Fellow, Margaret Butler. 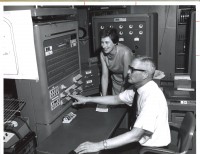 Margaret was a groundbreaking professional who made a name for herself in both computer science and nuclear energy. She was also active in supporting women in science and engineering during her career. In an interview (date unknown) in Science, Technology and Health Care, Margaret's advice to young women was to get a good education that includes "plenty" of math and science. She also encouraged them to treat everyone as an individual and to not be afraid to speak up for what is right.

Margaret's educational pursuits and mathematical abilities led to a lifetime of scientific contributions at a time when research and development (R&D) was a male-dominated area. She is representative of what tenacious women scientists have become, especially against the odds. 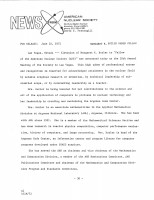 Her ANS Fellowship nomination was made in 1971 by five colleagues, all male. She became the first woman ANS Fellow in June 1972. Margaret joined ANS in 1959 and served as chair and vice chair of the ANS Mathematical and Computation Division. She was also a member of the ANS Nomination, Standards, and Publication Committees.

Born in 1924 in Indiana, Margaret was educated at Indiana University in Bloomington and pursued an education in statistics and differential calculus, graduating in 1944. After graduation, she worked for the federal Bureau of Labor Statistics (BLS), later switching to a civilian job within the U.S armed forces. In 1948, she was hired as a junior mathematician in the Naval Reactors Division for Argonne National Laboratory (ANL).

In 1949, the BLS requested Margaret return to work on a special two-year project. In 1951, upon completion of the assignment, she made a final return to ANL where she became an assistant mathematician in the Reactor Engineering Division. She was named leader of the Reactor Computing Group several years later.

Margaret led the Applications Programming Section of ANL's Applied Mathematics Division from 1959 to 1965, during which she was responsible for the organization and the operation of the Argonne Code Center, which would later become a part of the National Energy Software Center (NESC), a software exchange and information center for the U.S. Department of Energy and the Nuclear Regulatory Commission.

She was a consultant to the European Nuclear Energy Agency during the time it was establishing its computer program. Margaret became the director of NESC in 1972, a position she held until her retirement in 1991. From 1993 through 2006, she continued to work as a special-term appointee for ANL.

Together with other pioneering women scientists, she helped form the Chicago Area Chapter of the Association for Women in Science.

Margaret Butler passed away March 8, 2013, one day after her 89th birthday, but her legacy as the first female ANS Fellow will serve as a model for generations of women scientists to come.

Linda Zec is the Online Communications Specialist for the American Nuclear Society, as well as the editor of the ANS Nuclear Cafe. You can follow her on Twitter at @LindaZec.

Researchers from the Department of Energy’s Argonne National Laboratory are developing a “tool kit” based on artificial intelligence that will help better determine the properties of...

Coolant flow around the fuel pins in a light water reactor core plays a critical role in determining the reactor’s performance. For yet-to-be-built small modular reactors, a thorough...

Argonne microreactor designed to charge long-haul trucks of the future

A team of engineers in Argonne National Laboratory’s Nuclear Science and Engineering Division have designed a microreactor called MiFi-DC that could be factory-produced and installed at...