I teach a class every other spring at Iowa State University. A major in nuclear engineering is no longer an option, however the university has created a minor, where I give nuclear energy context to students who are studying mostly in a different discipline. I call the first month "Disaster Month" and spend a week on each of the major commercial accidents in our industry-Three Mile Island, Chernobyl, and Fukushima.

Until this year, Fukushima was a current event, as my students were mostly college juniors and seniors in 2011. This year, almost all of my students were in high school at the time and MUCH less aware of what happened in Japan.

For each disaster, I talk about the type of reactor, how it works, and important systems relevant to the event in my first lecture. The second lecture is a detailed blow-by-blow of the accident itself, up through a point at which the reactor is stable. Finally, we discuss the impact of the events on society, both in the area around the reactor and more broadly.

It is this bigger look I will address here. The specifics of the impact on technology are pretty well known, but I think we lose sight of the other impacts of an event like this.

The economic impact to Japan was enormous, and continues to affect them even now. Prior to 2011, Japan was a net trade exporter. With the exception of a slump in 2008/9, Japan had been running a $50 billion trade surplus. In other words, they were exporting $50 billion worth of goods and services MORE than they were importing. In 2011, Japan flipped that on its head and was a net IMPORTER of $50 billion worth of goods and services. In 2012 and 2013, the trend worsened. In 2013, the last year for which I could get data, Japan was a net importer of nearly $150 billion worth of goods and services. A large factor in this continuing deficit is in the form of coal, oil, and natural gas that the islands desperately need to keep factories working, homes lit and warm, and people moving from home to work every day. Worse, companies have moved off shore from Japan to access cheaper electricity. They may never return to the islands. 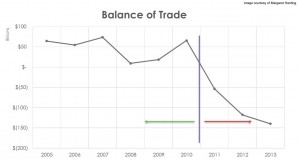 This huge trade deficit is one of the main reasons the Japanese government is continuing to work to restart nuclear reactors. It has been a slow slog for the new regulator and the utilities to figure out which reactors can be restarted, what repairs and modifications need to be done, and which reactors will never be restarted.

The human tragedy of the earthquake and tsunami is far worse, and still not considered worthy of reporting to the world at large. One of my students, trying to better understand the devastation of that earthquake and the tsunami, found a video that was a montage of videos that showed the earthquake itself (huge buildings swaying, people knocked off their feet, the liquefaction of the very soil), and then progresses to a series of videos of the tsunami from dozens of villages and cities up and down the coast of Japan (cars and boats sweeping by in the water, along with parts of buildings and roads). The horror in the background voices needed no translation.

Watching that video gave me a visceral reminder of the days immediately after the earthquake, when the US media was almost solely focused on the nuclear power plants at Fukushima and ignored the human catastrophe that was all around them. More than 16,000 people died in the great Tohoku earthquake and tsunami. Many more thousands lost their homes and their businesses. The piles of debris are slowly being taken care of, but many thousands of evacuees are still unable to return home, NOT because of the Fukushima nuclear accident, but because of the tsunami devastation.

Japan needs clean electricity. The islands have no fossil fuel assets of their own, and as much as some would wish it to be true, renewable energy cannot provide all of what Japan needs. We in the nuclear industry need to keep helping Japan and the rest of the world gain access to nuclear energy to meet their electricity needs.