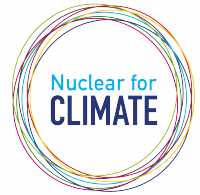 Imagine this scenario: Nations sign an agreement to do their part to clean all the human debris from the world's oceans and waterways. But there's a catch. They are prohibited from using boats. How would the world accomplish this enormous goal?

While that may seem ridiculous and counterproductive, that's exactly the type of agreement that nations are being asked to consider as they prepare for the Conference of the Parties (COP21) to the UN Framework Convention on Climate Change in Paris this December.

A previous COP agreement made in Bonn, Germany (2001, Articles 6 and 12), specifically directs nations to "refrain from using emission reduction units generated from nuclear facilities to meet their commitments." The problem with excluding nuclear-or any low-carbon energy source-is that it will tie the hands of the world's nations while holding them to an aggressive carbon reduction goal. It may also have a chilling effect on promising and future nuclear energy technologies.

More importantly, excluding any low-carbon energy source limits the choices that nations have available to lift their most vulnerable citizens out of energy poverty. More than one billion people are living today without safe food, clean water, or any of the basic resources we take for granted that are vital to health and prosperity. What options will be open for those countries that don't have the vast natural resources of land, sun, wind, or water needed for renewable energy sources? Nations must be able to choose nuclear from among the low-carbon energy sources that are available today and into the future.

The good news is that there is a growing number of environmentalists, scientists, and business and world leaders who are publicly declaring their support and even outright advocacy for nuclear energy. The more that true environmentalists learn the facts about nuclear energy, the more they are admitting publicly, "I was wrong about nuclear energy." For example, four prominent climate scientists, including James Hansen, wrote in a 2013 letter, "While there will be no single technological silver bullet, the time has come for those who take the threat of global warming seriously to embrace the development and deployment of safer nuclear power systems as one among several technologies that will be essential to any credible effort to develop an energy system that does not rely on using the atmosphere as a waste dump."

Earlier this year an impressive independent group of ecologists, economists, conservationists, policy experts, and other citizens released the Ecomodernist Manifesto. They said, "Transitioning to a world powered by zero-carbon energy sources will require energy technologies that are power dense and capable of scaling to many tens of terawatts to power a growing human economy...Most forms of renewable energy are, unfortunately, incapable of doing so...Nuclear fission today represents the only present-day zero-carbon technology with the demonstrated ability to meet most, if not all, of the energy demands of a modern economy."

Ironically, a report by the United Nations' Intergovernmental Panel on Climate Change suggests that nuclear energy could be a key source of low-carbon energy worldwide. It also notes that "...progress in research and development has been made concerning (nuclear) safety and waste disposal."[2]

But one of the biggest problems faced by nuclear energy became clear to me while searching for opinion poll results for this article-most of the polls conducted by news organizations such as ABC, CBS, and CNN did not even ask about nuclear energy! Their questions focused on wind, solar, hydro, oil, coal, and natural gas. These are the statistics that our policymakers and the public are hearing, with no mention of nuclear. More than three-quarters of Americans believe that maintaining a diversity of energy sources to supply our nation's electricity is "very important."[3] But they aren't even being asked about nuclear.

It is up to us in the nuclear field to be pro-active in educating the public in every way we can about the benefits, safety features, and economics of nuclear power, and to get it on their radar. Toward that end, the American Nuclear Society has joined with more than 40 other nuclear societies in the Nuclear for Climate initiative. The goal is to ensure that nuclear power is available to nations as part of the solution to reducing carbon emissions from energy sources.

The world needs nuclear now, more than ever before. In these two months leading up to COP21 in early December, I hope that everyone reading this will repost it, tweet it, share it, and put it wherever you think the general public-including our elected officials-might see it using #Nuclear4Climate, #COP21, and #NuclearEquality. We need to follow, share, and retweet climate-related nuclear messages from all of our partner organizations, environmentalists, and other nuclear supports. We must write more blogs in language that the general public can understand. Let's turn more people into informed supporters of nuclear power. We must make some noise for a better world for the billions of people who need reliable nuclear energy now and into the future.

While we nuclear professionals like our facts, figures, and scientific evidence, the general public just wants to know what it all means to them. So rather than sing to the nuclear community choir with complex data, I'm going to state just one unequivocal, irrefutable, highly researched, and analyzed fact: The world cannot meet the carbon reduction goals agreed upon by parties to the United Nations Framework Convention on Climate Change, while also meeting the world's growing energy needs, without nuclear. Period.

Now we need to make sure that message is heard. The world is counting on us.