How Safe Are Nuclear Power Plants?

Editor's note: Josep is a 17-year-old high school student in Spain. He is a nuclear energy enthusiast keenly interested in promoting both nuclear energy and renewables in his home country and abroad, for the betterment of man's energy future.

Generating energy by nuclear fission has proven to be one of the safest industrial pursuits in the world. Nuclear accidents such as Chernobyl or Fukushima happened in large part because of failings in systems-systems of people, procedure, and political interference in day-to-day and moment-to-moment actions at nuclear plants-and so I won't have them in mind when writing the next lines.

When we talk about nuclear safety, or the construction of a nuclear power plant, and the company tells us, "This reactor has lots of safety systems and so you will never have to worry about an accident here," our first question would be: "If nuclear plants are so safe, why do they need so many safety systems?" The answer is much simpler than a nuclear reactor: Decay heat. 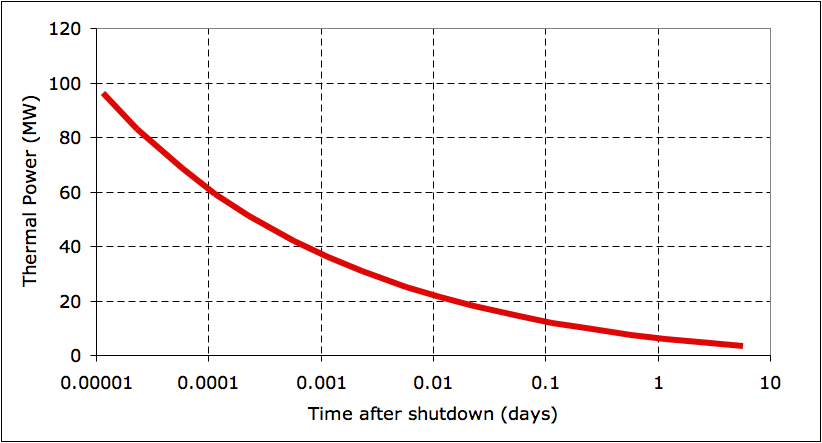 After an operating reactor has been shut down, the decay of radionuclides in the fuel continues to generate heat (this is a main disadvantage of nuclear power, and sometimes the cause of nuclear accidents). This heat represents seven percent of the maximum thermal power output one second after the reactor is shut down. After 24 hours, it represents 0.5 percent of the nominal thermal power. This may not seem like of heat, but it is. The average reactor of a 1000MW power electricity output has about 3000MW of thermal power. One day after shutdown it will still produce 15 MW of heat inside the reactor pressure vessel-enough to boil a thousand liters of water from 20 ºC to boiling point in slightly less than 24 hours.

As a result, if cooling is stopped by 1 to 2 years from shutdown, soon or later the fuel could become uncovered by water, assuming no one does anything to monitor and correct water level in the reactor pressure vessel. The same happens with the spent fuel pool at nuclear power stations.

Decay heat is the principal reason of safety concern in light water reactors, and by this reason nuclear power stations must have several safety and safeguard systems to make sure that even in the worst case scenario the fuel does not become uncovered ( or uncooled by water).

Nuclear reactors always have safety systems subdivided into other safety systems. There are also systems that can work off of steam pressure in the reactor/steam generators, even if the most powerful power sources are lost. Of course, those systems are operated through various sources of power such as batteries, diesel generators, backup generators, and the external power line.

If one system or component fails, there are additional systems (some of them are passive systems) that prevent a nuclear reactor from overheating. That is how safe a nuclear reactor actually is. In addition, new reactors such as the VVER-1200 and the AP-1000 can exist, some days, without any kind of external power (neither AC nor DC).

Another thing that may concern people about a nuclear reactor is the massive amount of power that it can produce. It is obvious that an uncontrolled chain reaction will increase the reactor's power production by a factor of hundreds, melting it within seconds. To prevent this from happening, there are two things methods of control: control rods and nuclear poison.

Control rods are present in all kind of reactors and are designed to shut down the reactor within two seconds. (The RBMK design, however, was decreased from 18 to 12 seconds after the RBMK-design Chernobyl accident).

The second method of control is nuclear poison (boron), which is only present in pressurized water reactors. (This system and the system used to control the power of the reactor aren't the same thing).

Both of them are made of elements (or an element)  able to absorb neutrons: Boron and cadmium in the first system and solely boron in the second one. Both of them are designed to terminate the reaction within a couple of seconds.

To sum up, we should rethink and educate the public on exactly how dangerous nuclear power plants are, because these plants are highly prepared even for the most extreme crisis.

Josep Rey Cases is 17 years old and is living in Catalonia, Spain. He has been interested in energy sources and nuclear power since mid-2013. He is preparing to start his undergraduate degree studying electrical engineering. He is a native Spanish-speaker learning English as a second language. Josep can be found on Twitter @peptry.