Last week, it was revealed publicly that a Draft Resource Plan being floated by the Tennessee Valley Authority (TVA) includes the presumption that the long-unfinished Bellefonte nuclear plant near Scottsboro, Alabama, will not be completed. TVA's nuclear energy history will span 50 years this June, and there are developments in the works with Bellefonte and one other TVA plant to be mentioned later. All are now expected to shake out this year, and may preface the final volume of that long up-and-down history. 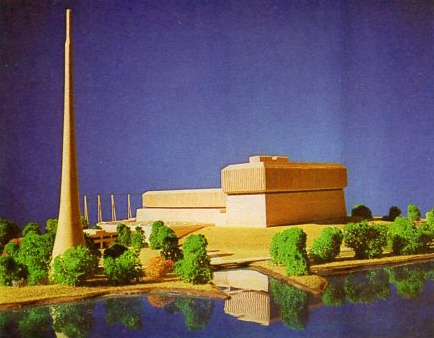 Initial model of Browns Ferry nuclear plant as originally conceived and ordered as a two-unit plant. From brochure "TVA Power 1967."

In June 1966, TVA announced that it would order and construct its first nuclear plant in north-central Alabama. This plant, Browns Ferry, would be designed to house the first two General Electric BWR/4 reactors built anywhere. The units would each produce 1065 MWe net (the most powerful boiling water reactors ordered at that time) and were intended to enter service in a short time span-1970 for Unit 1, and 1971 for Unit 2, or four years and five years respectively.

Construction of the station began in May 1967, but one month later TVA made a decision to add a third unit of identical type to the station-in the same structure, now to be expanded. TVA stated that the third unit would give the station a total capacity of 3456 MWe and make it the most powerful steam-driven electric generating station of any sort in the world. The construction and testing of the station did not meet those early, optimistic goals. 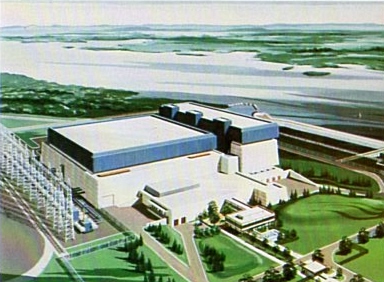 WASH-1174-71, the annual U.S. Atomic Energy Commission publication on the progress of nuclear technology, was issued covering 1971's developments. In that volume, the completion dates of the first two units were pushed back to 1972 and 1973 respectively; the third unit, originally hoped to be on-line in 1972, was delayed to 1973-revealing the first of a number of delays.

Growing demand and start of a nuclear fleet

Both the size of TVA's power generation and distribution facilities, and the expected demand growth it was facing in 1966-1967, were somewhat amazing for the time period. In 1967, TVA was operating 14 GW (gigawatts) of steam-generating capacity in a total of 11 plants; it also had four GW of capacity in hydroelectric power provided by no fewer than 47 dams. At that time TVA was building six GW of additional steam power (more than half of this was Browns Ferry, with the rest coal) and it expected to have more than 24 GW on-line by 1972. This was all necessary because TVA's growth in demand was so explosive.

According to the brochure TVA Power 1967, electricity use was clearly growing. It showed that residential use had doubled from 1950 to 1954 and again from 1954 to 1960, and it was expected to double again between 1960 and 1968. Together with increasing municipal and industrial load, this laid out a requirement for vastly increased generating resources. Nuclear energy was showing itself to be profitable toward the end of the 1960s. Reliability and capacity factors on installed plants began to improve markedly. Nuclear fuel was an important addition to a company that was already burning 27 million tons of coal per year.

In April 1968, TVA ordered a two-unit nuclear station for Tennessee-Sequoyah nuclear plant-with an expected completion date of 1974. Sequoyah was to be built with Westinghouse pressurized water reactors, and units each rated 1124 MWe.

In August 1970, TVA ordered Watts Bar nuclear plant to be built in Tennessee. It was to consist of two Westinghouse PWRs (rated 1169 MWe) and were slated for completion roughly in 1976 and 1977.

In WASH-1174-71 for 1971 there is an interesting note: Listed among the Nuclear Steam Supply System (NSSS) orders for 1970 is a pair of Babcock & Wilcox PWRs rated 1175 MWe and slated for completion in 1977 and 1978, but for which no plant name or location is given. This is the first hint of a massive further construction program that TVA would undertake-a program that would from this point forward produce no reactors that ever actually went into service.

That mysterious listing actually represents the order for the Bellefonte NSSSs (also in August 1970, when Watts Bar was ordered).

A TVA brochure from 1976 shows concept models of the Sequoyah and Bellefonte plants (top and bottom) and an artist's concept illustration of Watts Bar (center.)

At the start of 1971, TVA had either on order or under construction a total of four nuclear plants that contained a total of nine reactors and an aggregate generating capacity of more than 11,100 megawatts net. (It is important to note that the ratings given for the plants changed over their construction periods, generally increasing slightly.) In December 1972, TVA ordered an enormous nuclear generating plant. This plant, to be built near Hartsville, Tennessee, was to have four units on two mirror-image sub-sites, and was to be rated 5140 MWe total-the largest nuclear plant yet ordered anywhere at that time. Hartsville was to have been divided into "A" and "B" sites, with units called Hartsville A1, A2, B1, and B2. TVA ordered GE BWR/6 reactors for these four units-about as new then as the BWR/4 had been for Browns Ferry. The four nuclear islands of this plant were designed to GE's GESSAR (General Electric Standard Safety Report) design standard-an early industry attempt at standardization to ease design and licensing.

TVA stated in 1976 that by 1985 an incredible 45 percent of its total generating capacity would be nuclear. It now had seven nuclear generating stations on order with 17 reactors totaling more than 21 gigawatts of capacity. It had also now ordered NSSS equipment from all four major US vendors. (Interestingly, all of the units ordered in 1972 and 1974 were ordered with Brown Boveri turbine generators-a make that was quite unusual in US nuclear plants nationwide-and equipment for the six GESSAR-based nuclear units was ordered en masse with some savings over individual purchases.) Before Browns Ferry was fully operational a giant 3000-foot-long complex of mechanical draft cooling towers was added to satisfy new legislation that restricted impact to natural bodies of water. From 1976 TVA brochure.

Those familiar with the history of nuclear energy in the United States (and in many others, where initial nuclear builds were not completed fully) will know what came next-reducing demand projections, regulatory slowdowns of the early 1970s, and then the regulatory semi-gridlock following the Three Mile Island accident. Increasing financing costs for nuclear plants would also be part of the mix. Browns Ferry came on-line and later encountered troubles, although the plant is on-line today with a solid record. Sequoyah's units entered service in 1981 and 1982; Watts Bar-1 was long delayed, only entering service in 1996, while Watts Bar-2 is scheduled to enter service in December 2015.

The plain fact is that the enormous demand increases experienced by TVA in the 1950s and 1960s did not continue through the 1970s and 1980s. In addition, regulatory delays and construction problems (as with most US nuclear plants during this period) began to drag out the timelines of plants under construction. By 1976, TVA knew that the original four-year-plan was impossible and was stating that plants could not be completed in anything less than about eight to ten years. However, it was still paramount that TVA be in front of anticipated demand and not behind it. A paragraph from a 1976 TVA brochure on Browns Ferry sets the scene perfectly well:

Under present procedures, nuclear plants started now will not be finished for 8 to 10 years-when children who are now in the second or third grade graduate from high school. Such long lead times require careful estimates, detailed plans, and prompt construction to provide adequate capacity for the future. Although it is possible for an estimate to be off in either direction, to err on the side of too little capacity too late would have much more serious social and economic consequences than to err on the side of planning new capacity too soon.

According to TVA, its load estimates began to decrease sharply in the 1980s-and it had an enormous amount of generating capacity under construction because of the principles outlined in the quote above, as did many other utilities across the entire United States. In August 1982, TVA made a decisive move. It cancelled Hartsville-B1 and -B2 (which were 17 percent and 7 percent complete, respectively) and Phipps Bend-1 and -2 (29 percent and 5 percent complete, respectively.) At the same time it indefinitely deferred Hartsville-A1 and -A2, as well as Yellow Creek-1 and -2.

In July 1984, TVA's staff recommended to the Board of Directors that the remaining unfinished units at Hartsville and Yellow Creek be cancelled as well, considering not only the load projections but also the cost increases (which were not by any means unique to TVA for nuclear plants under construction at this time). In October, this action became final and Hartsville-A1 and -A2 and Yellow Creek-1 and -2 were all cancelled (these were 44 percent, 34 percent, 35 percent, and 3 percent complete, respectively). 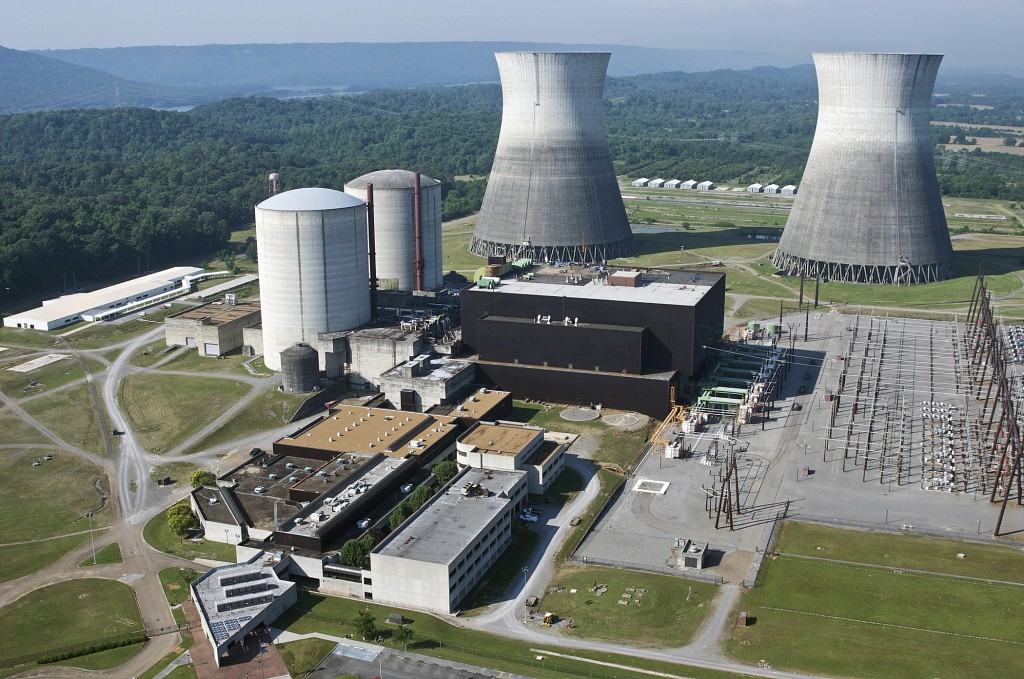 Bellefonte remained essentially mothballed until 1993, when TVA restarted construction. By 2001, it expected to complete the units in 2011 and 2014; however, in 2005 the units were finally cancelled (amid plans to build Bellefonte-3 and -4 using Westinghouse AP1000 plants, and re-using some of the site services originally intended for the B&W units, such as substations). The plans for the AP1000 units also did not come to fruition, and although TVA eventually reversed itself again and began work on the original Bellefonte units, it has now announced in its Draft Resource Plan that the units are not in the future generating plans of the company. Whether or not this means that they'll finally be fully cancelled and dismantled remains open to question.

In the meantime, Watts Bar-2 remains as the last unfinished unit with hope of completion and operation from TVA's enormous original program, and if all goes well that will happen this year. If it does, and if TVA decides that Bellefonte will never be completed and begins to dismantle the site, the final shape of TVA's nuclear fleet will likely be taken, a half century after it was first imagined and conceived.

(Note:  I have deliberately avoided mention of the Clinch River Site-either the breeder reactor of early days, or the small modular reactot plans of later days-as these projects were not properly TVA projects, per se.)

•All of these sources are in the author's collection.  Illustrations from sources as noted.

Will Davis is Communications Director, historian, newsletter editor and board member for the N/S Savannah Association, Inc. He is a consultant to the Global America Business Institute, a contributing author for Fuel Cycle Week, and writes his own popular blog Atomic Power Review. Davis is also a consultant and writer for the American Nuclear Society, and serves on the ANS Communications Committee. He is a former US Navy reactor operator, qualified on S8G and S5W plants