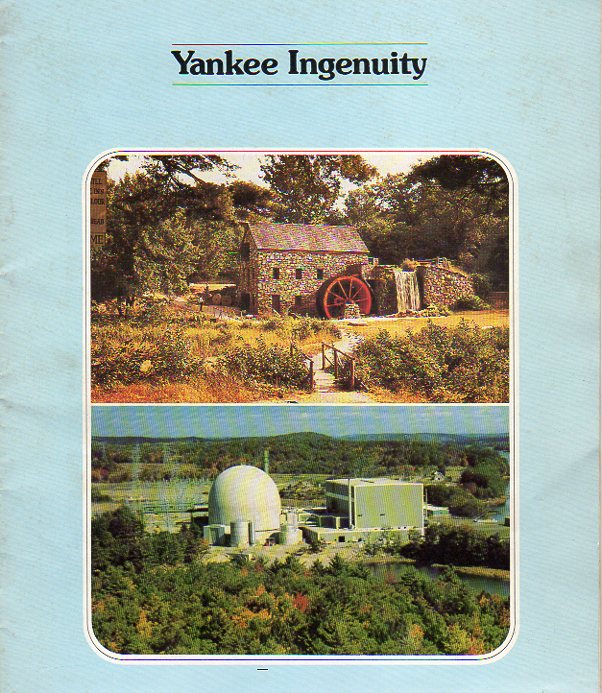 There was a time in our not too distant past when a brochure such as that above-entitled "Yankee Ingenuity," and published in 1982 by the Nuclear Information Committee of the Electric Council of New England-carried a message that rang true. The imagery of the mill house, as an early cornerstone of commerce employed widely across New England, was coupled with the image of a nuclear power plant. The Northeast had a tendency for doing what was necessary to advance commerce and break away from foreign control. In short, it was the "Yankee spirit."

It was in that corner of the United States that the breakaway from England launched; it was, decades later, in that corner too that the people found themselves almost completely at the mercy of oil prices for their electric power generation-prices also under foreign control. Starting with the legendary Yankee Atomic Electric Company plant at Rowe, Mass., the Northeast planned and built a range of nuclear plants to diversify its fuel mix and wrest away control of its electric power pricing from outside interests. 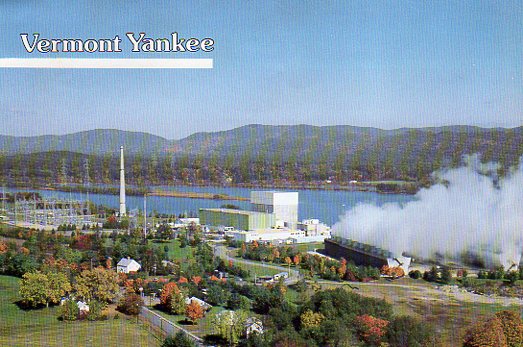 I use the term "was," because on Monday, December 29, 2014, Vermont Yankee disconnected from the grid at 12:12 PM. The reactor was shut down for the last time at 1:04 PM the same day. The plant follows a number of the Northeast U.S. nuclear plants into shutdown and decommissioning (gone before are Yankee Atomic's Rowe plant; Connecticut Yankee; Maine Yankee; and Millstone Unit 1 in Connecticut.) The plant was bought from the original owners by Entergy in 2002 with the notion, according to Entergy economist Barrett Green (as reported in the Portland Press Herald), that it would benefit from some future carbon pricing structure. In the end, according to Green as quoted by the Herald, the plant was a "bad investment."

We could roll out the epitaph of Vermont Yankee easily-designed and built by EBASCO, dates on and off the grid-and much of that has been (and will be) done either briefly or exhaustively in days and weeks to come. Harder to quantify are the tens of thousands of man-hours put into constructing, operating, maintaining, and, yes, inspecting this plant over its four decades of life. The dedication of many men, women, and families to this plant over these decades were not in vain because of what this dedication saved: Millions of gallons of oil whose use was avoided because of the operation of Vermont Yankee. (The use of oil would have brought with it the added cost and the ever present threat of shortage, either due to foreign production control or transportation infrastructure complications.) And then there's the pollution that would have resulted from generating power to stand in for Vermont Yankee over all those years had it not been built. Few people remember that at the time that these plants in New England were coming into operation, oil fuel was used to provide roughly 60 percent of the area's electric power. The tool that cut back on that singular dependence? Nuclear energy.

Seen so soon after the fact, it's hard to look past the present effects-a looming cold winter, in which the Northeast ISO which distributes power in the area is likely to find itself facing price spikes when natural gas use is restricted to home heating, just as it did last year when it had about 600 MWe more capacity than it does now unfettered by such restrictions. Also, there are the people who used to contribute heavily to the community-now are looking at starting over elsewhere. It's impossible to escape the real, tangible impacts of the shutdown of this plant.

And yet there are those who would celebrate the closing of an old reactor, of course not realizing that nuclear plants are not allowed to grow old. Instead, nuclear plants are updated, improved, and even uprated in power over their lifetimes, always under the extreme scrutiny of the world's leading nuclear regulator (often referred to as the "Gold Standard" for regulators the world over).

There are those who campaigned mightily to keep this plant open-workers, concerned citizens, experts in the field of nuclear energy-who have now seen their efforts thwarted by the plant owner having declared the plant no longer economic to continue operating. Many people are aware of the stabilizing effect on the grid that nuclear plants have, the price-controlling effect that buying nuclear fuel two years at a time has, and at no end the reliability of nuclear plants in extreme weather of all sorts. For naught? No. Those same arguments, those same reasoned explanations, all fit nuclear plants everywhere. The fight having been fought-and learned from-is far more important to our nation's discussion of energy than might be gleaned from a wished-for future in which the fight never took place.

But for now, as a testament to the thousands of people who designed, built, operated, regulated, and fought for this plant, and as a reminder that nuclear energy was once thought of as a marked advancement in man's quest to provide affordable, reliable energy in this part of the country, perhaps all we need do is quote the preface of the booklet about the Northeast's nuclear plants, "Yankee Ingenuity":

"Bound together by heritage, climate, and geography, New Englanders are a certain breed. The hallmarks of New Englanders are the tenacity to get things done and the cleverness to use imaginative methods to do them. Call it 'Yankee Ingenuity.' From water wheels to nuclear power, new energy forms have taken root in New England.

During the next two decades, the same resourceful New Englanders proved the economy, safety, and cleanliness of nuclear energy and added to the region's nuclear generating capacity.

Today, over 30 percent of New England's electricity is produced by nuclear power plants, a leadership founded on the heritage of Yankee Ingenuity."

What will "leadership" bring in the field of affordable, reliable energy in the region now? Only time will tell.

Other New England nuclear plants have been decommissioned and (except for spent fuel storage) returned to 'green field' status. Websites for each: