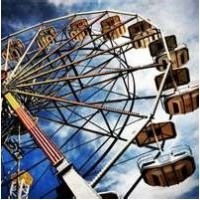 It's time for the 204th Carnival of Nuclear Energy Bloggers and Authors - and this week, it's hosted right here at the ANS Nuclear Cafe.  The best pro-nuclear authors and bloggers have lined up to submit their choices for this week's compilation.

Why DOE Should Back SMR Development

FirstEnergy's Tony Alexander doesn't like what's happening to the grid

This guest post was written as a comment on another blog, shortly before the 60 Minutes "third anniversary of Fukushima" television segment was broadcast.  In the post, Greenidge predicts that desolate towns and earthquake-induced natural gas fires will be featured on 60 Minutes.  Comparative background radiation levels will not be featured. Was he correct?

As part of the response to the US Nuclear Regulatory Commission's post-Fukushima requirements, companies that operate nuclear energy facilities are re-evaluating the earthquake potential at their sites using the latest data and methodologies.  Surviving the up to 20 g bull ride atop AREVA's 7-ton shake table is one way to test safety-related components, and help U.S. nuclear power facilities remain a safe, reliable and bountiful clean energy source of electricity to power America's industry, hospitals and homes.

With our need for energy growing, not just during cold weather snaps, we need a reliable, diverse energy mix that prioritizes low-carbon energy sources to improve public health and reduce emissions.  Nuclear energy currently accounts for approximately 20 percent of U.S. electricity and 63.3 percent of emissions-free electricity.  Increased energy grid stability and reliability are some of the more well-known benefits of nuclear energy, but its positive contributions to public health are too often overlooked.

TMI Operators Took Actions They Were Trained to Take

This is a guest article by Michael Derivan who was the Davis Besse shift supervisor on September 24, 1977 when the plant experienced an event that was almost identical to the event that resulted in the TMI core melt accident. For the first 20 minutes, the Davis Besse plant and operator responses were almost identical to those at TMI. Then Derivan had an ah-ha moment and turned his event into an historic footnote instead of a multi-billion dollar accident.

In this lengthy, carefully explained piece, Derivan tells why his plant and his crew responded to a loss of feed water event in the same way that the TMI plant and crew responded 18 months later. He wonders why the lessons learned from his event were not shared with the TMI operators sometime during interval before their accident and why the subsequent investigations did not reveal the true root cause.

Will Davis takes a look at the program being developed by the Kenya Nuclear Electricity Board, its history and its effort to have its core of nuclear engineers and experts educated overseas to seed the program in future years.

Rod Adams recently attended the Nuclear Energy Insider SMR conference, and at ANS Nuclear Cafe he reports on the events of the second day of that conference which focused on information for those interested in developing a market for such plants outside the U.S.

A Pyrrhic Victory In Vermont for Nuclear Power?

Howard Shaffer continues the long-standing ANS Nuclear Cafe coverage on events surrounding the Vermont Yankee plant with this piece which describes the recent Vermont Public Service Board's issuance of a Certificate of Public Good for the plant.  Important facts for nuclear advocates - as well as great motivation - can be found in this article.

Arnie Gundersen is making a concerted effort to have the world think that hot particles also come from nuke plants, especially Fukushima Daiichi. His latest "evidence" comes from a professional civil engineer in Massachusetts who has been trying for three years to use this contrived hot particle notion as a basis for getting a PhD...without success. Further, Gundersen makes one of the most convoluted conspiracy theory claims to yet come out of the Fukushima realm of distorted journalism.

Here are details on the General Atomics (GA) Energy Multiplier Module(EM²) reactor.GA is innovating new materials, getting the efficiency way up,simplifying the design and getting the cost into the competitiverange.GA is developing a Brayton cycle to convert heat to electricity at 53%versus 28 to 34 percent for regular steam turbines. In a four-moduleplant (1.06GW), one point of efficiency is worth a billion dollars inrevenue over the life of the plant. 53% efficiency means $19 billiondollars more than a 34% efficient plant.GA's design is a 265-megawatt (electric) sized reactor, with a fuelcycle lifetime of 30-plus years.

Possibly later this year, General Fusion will begin work on afull-size prototype reactor. At the center will be a sphere, threemeters in diameter, inside which molten lead swirls at high speedcreating a vacuum, or vortex, in the middle. Arrayed around it will be200 to 300 pistons, each the size of a cannon. Firing in perfectharmony, they will create an acoustic wave that collapses the vortexat the very moment a plasma injector shoots hydrogen isotopes, thenuclear fuel, into it. If General Fusion has its physics right, theheat and pressure will ignite a fusion reaction that spins offcountless neutrons which will heat the lead even more. Pumped througha heat exchanger, that hot lead will help generate steam just like aconventional thermal power plant.

The pouring of concrete for the basemat of the first HTR-PM unit - ademonstration high-temperature gas-cooled reactor - at Shidaowan inChina's Shandong province was recently completed. Another 19 of thesmall modular reactors could follow.HTR-PM are modular reactors that will be mainly factory mass-produced.The first one is taking 5 years to make. The reactor module will headtowards about two years to build when they are making them by thedozen.The demonstration plant's twin HTR-PM units will drive a single 210MWe turbine. It is expected to begin operating around 2017. Eighteenfurther units are proposed for the Shidaowan site, near Rongcheng inWeihai city.

Gail Marcus describes a recent IAEA study on the risks of external events at nuclear power plants.  She summarizes the major findings of the report, and notes that, in many cases, corrective actions have already been taken to address some of the plant vulnerabilities.

That's it for this week's entries.  Thank you to all of our authors and to those who selected pieces for submission!