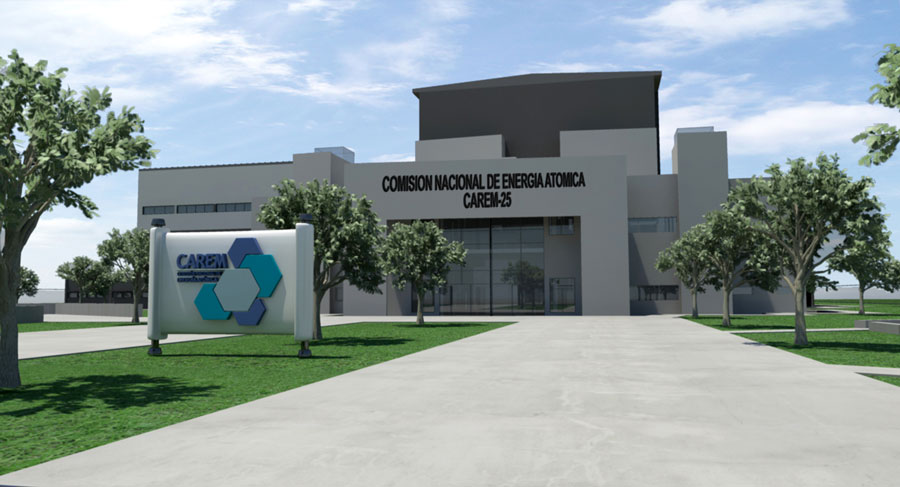 News came out this week that the first concrete had been poured at the construction site for the world's first small modular reactor (SMR) project-and it wasn't for a Generation mPower SMR at the former Clinch River site, or for a SMART SMR (which was the first type in the world to receive governmental design certification) at a site in South Korea.

Instead, this milestone event occurred in Argentina, at a site adjacent to the Atucha nuclear station (which hosts one operating pressurized heavy water reactor [PHWR] and a second long-delayed PHWR under renewed construction and expected to be completed this year).

The SMR under construction is called the CAREM 25, which is not only an indigenous Argentinian design, but also the first-ever indigenous Argentinian power reactor design.  (The PHWR units were designed by the German firm KWU-later Siemens/KWU-and Argentina had previously only designed and built its own research and test reactors.) 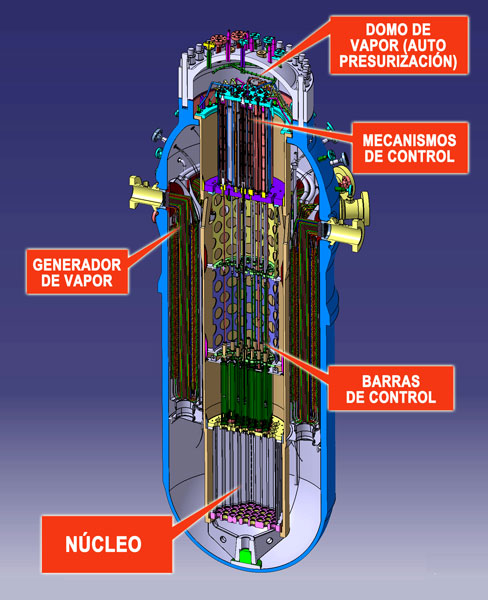 The design chosen for this first prototype plant construction is a 100-MWt/27-MWe reactor in the classic "integrated pressurized water reactor" (iPWR) format with steam generators, reactor core, control rod drive, and pressurization all internal to the reactor vessel. An interesting feature of the CAREM 25 is that it does not include primary (reactor) coolant pumps; coolant flow on the primary side is entirely by natural circulation (natural circulation primary flow is also a feature of the NuScale Power SMR that recently won US Department of Energy cost-sharing funding, and a lightwater iPWR SMR under research by Mitsubishi Heavy Industries). The design includes 12 identical helical tube steam generators, each of which is piped to a common connection flange (seen ringing the reactor vessel in the illustration above) that includes concentric piping for feedwater inlet (radial connection) and steam outlet (vertical connection, seen better in next illustration.) These feed and steam connections are piped to large circular common headers that surround the reactor vessel.

The CAREM 25 prototype will be built in a completely new facility, on the site of a former heavy water research facility that is adjacent to the Atucha station but which, according to the website of the Argentinian National Atomic Energy Commission (CNEA), will include facilities for training operators and performing other research. Below, an illustration from the CNEA website shows the location of the CAREM 25 construction on the overall site. 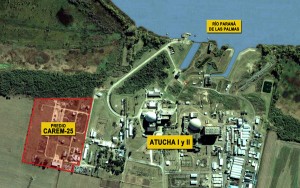 The CAREM 25 nuclear plant will include three "modules" or sections, the design of which has evolved over time. Largest will be the "reactor module" that includes the SMR itself, a pool-type pressure suppression containment roughly like that of a MkIII boiling water reactor, the spent fuel pools, and emergency cooling equipment (among many other items). The "BOP module" or balance-of-plant module contains the turbine generator, condenser, and feed and feed treatment systems. A third structure contains control and administration. See illustration below for latest planned configuration of the plant.

The once-through steam generators are promised by CNEA to deliver steam at 4.7 Mpa (about 680 psi) and are also promised to give about 30 ºC (86 ºF) of superheat.

CAREM 25 nuclear plant final design, courtesy CNEA. The largest building is the reactor building; the turbine or BOP building is to the left.

History of the CAREM project

The CAREM 25 development started in about 1980, was first announced in 1984, and was among the very earliest of the iPWR designs now in the construction pipeline to be developed. It was preceded only by the Babcock & Wilcox CNSG series that was developed in 1962, a version of which powered the German-built ship Otto Hahn in the 1970s. The CAREM 25 project continued at various paces, with a marked reduction in effort in the early 2000s. According to CNEA's news release, nuclear development in Argentina was "re-launched" in 2003, leading to revitalizing this project. A major change came in 2006 when, by governmental decree (actually, an executive order), the CAREM 25 program was made a national priority-a priority that was bolstered in 2008 when, by second executive order, the development of the project was made directly responsible to president of Argentina.

A key decision in the process to license and build the CAREM 25 was made in 2009 when it was legislated that the plant be licensed as a prototype and not as a conventional commercial power reactor, according to CNEA's website. 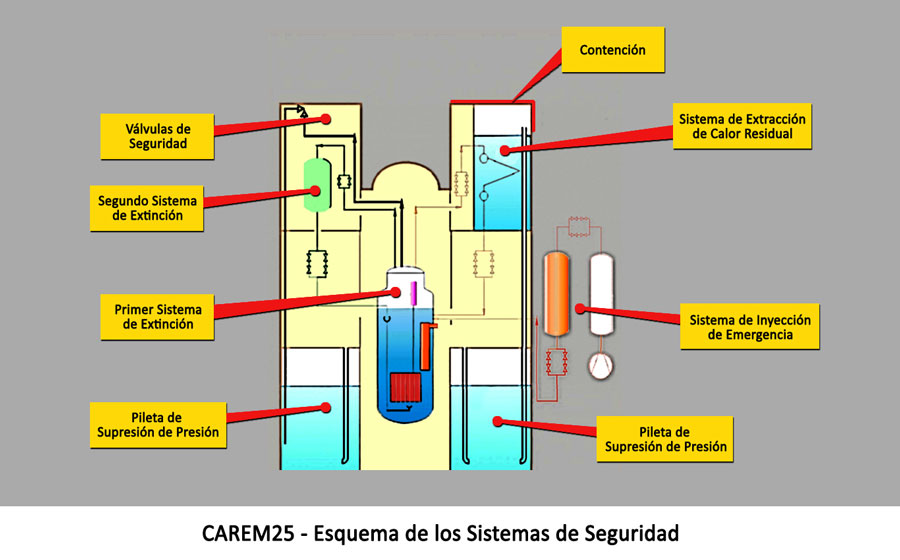 Safety of the CAREM 25 prototype, according to the CNEA website, will be assured by both passive and active systems (as a backup). The reactor includes "safety shut down" control rods that will always be fully withdrawn during operation but which will scram when required for shutdown; these are backed up by borated water injection in an emergency shutdown system that has two tanks, either of which can shut down the reactor. A passive residual heat removal system is incorporated in the reactor building, and external safety injection systems are also included.

CNEA has reported that the CAREM 25 design has been reviewed in light of the Fukushima Daiichi accident, with consideration given to seismic requirements, and extended blackout/loss of heat sink scenarios. 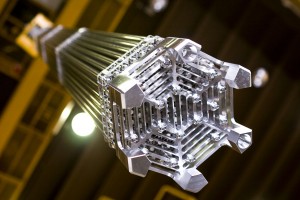 CAREM 25 fuel element, already tested in the RA-6 reactor. There will be 61 of these in the CAREM 25, with an enrichment of 3.1percent. Photo courtesy CNEA.

CNEA has already announced that it will build another a 100-MWe CAREM 25 reactor near Formosa in Argentina, should the prototype at Atucha prove successful; further, it has announced a larger 300-MWe version that appears destined to be pushed for export. This ultimate version differs somewhat from the CAREM 25, particularly in a conversion to forced coolant flow using axial flow pumps driven electrically. The pump motors will be mounted below the reactor vessel, on long extensions well below the level of the lower head; the axial flow pumps themselves will be inside the radius of the lower head.

CNEA's CAREM 25 project manager, Osvaldo Calzetta Larrieu, stated in a presentation to the International Atomic Energy Agency in late 2013 that key benefits of the CAREM 25 program include "recovery of CNEA expertise, and development of the ability to construct large projects"-a matter of not only national prestige, but practical applicability and economic sense, given the early start the Argentinians have and the expected demand for SMRs in regions where nuclear power is not already established.

Clearly, Argentina has a program of which it can be proud-especially considering its first construction of an SMR plant in a competitive universe rife with press releases, but devoid of new concrete. The fact of the matter is that CNEA, its contractors, and Argentina have far more to be proud of than this, because its program has both local applications (reliable and affordable energy) as well as national and international implications (building a local industry, exporting nuclear plants, and reducing carbon footprint) that should be a role model for everyone.

Will Davis is a consultant to, and writer for, the American Nuclear Society; an active ANS member, he is serving on the ANS Communications Committee 2013-2016.  In addition, he is a contributing author for Fuel Cycle Week, is Secretary of the Board of Directors of PopAtomic Studios, and writes his own popular blog Atomic Power Review. Davis is a former US Navy Reactor Operator, qualified on S8G and S5W plants.  Davis is an avid typewriter collector in his spare time, and both speaks and writes Spanish - although not often!

A video posted to Twitter by Vice News discusses the prospect of advanced reactors being an important mix of carbon-free power production in the United States. Hosted by Gelareh Darabi, an...

The United Kingdom, the first of the world’s major economies to adopt a legally binding commitment to achieve net-zero greenhouse gas emissions by 2050, has released a blueprint to help...

The Department of Energy has announced the reestablishment of the Arctic Energy Office (AEO), to be located on the campus of the University of Alaska Fairbanks. The AEO was originally...