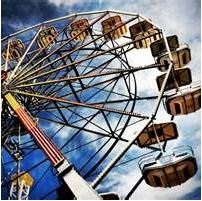 It's time for the 192nd Carnival of Nuclear Energy, in which the world's top pro-nuclear bloggers and authors entertain and inform us with their best posts and stories.

The field is wide this week - so let's get right to it!

At Nuke Power Talk, Gail Marcus speculates what might have happened in the past if our Stone Age ancestors had known then what we know now about the potential dangers of any technology, and draws from this a message of how we should deal with the knowledge of such risks.

Russia's announcement that it plans to lend Hungary $14 billion to finance the expansion of the Paks nuclear power station is one more piece of evidence showing that Russia continues to diversify its income by exporting nuclear power stations to as large a market as possible. It is winning sales competitions by providing as complete a product as the customer desires.

Rod Adams highly recommends a terrific brochure titled "Radiation: The Facts". The document concentrates accurate information about radiation into a a tri-fold that can be read and understood in just a few minutes. It is a valuable presentation handout, would be a useful addition to the material offered in doctor's offices, and should be a part of any classroom discussion about radiation.

Take Action:  Comments to the Public Service Board

Vermont Yankee will close at the end of this year when it finishes its fuel cycle. In December, after lengthy negotiations, Vermont agencies and Entergy signed an agreement. This agreement ends lawsuits, obligates Entergy to pay around $40 million dollars into various funds, and says that the state will allow the plant to run until the end of its fuel cycle.  However, the agreement does not take effect unless the Public Service Board rules.  In this post, Meredith Angwin encourages people to comment to the Public Service Board. She provides a link for comments, as well as links to the agreement and other back-up documentation.

Can Entergy Trust the State?  Comments by John McClaughry

"An Ethos of Nuclear Reactor Safety" by Sherrell R. Greene

The mantle of nuclear safety guardianship is passing to a new generation. What has history taught us about the way a nuclear safety expert should approach his or her profession?

"A Century of Technology - Remarks by Richard Rhodes"

Richard Rhodes, historian and best-selling author of the Pulitzer Prize-winning The Making of the Atomic Bomb, was the keynote speaker at a special dinner at the 2013 ANS Winter Meeting commemorating the 75th anniversary of the discovery of nuclear fission.

A synopsis of reports published in Fukushima Updates and Fukushima Commentary on the Hiroshima Syndrome site between March 2011 and January 2014.

The facts concerning the radioactive cesium at the Fukushima Daiichi station.  The synopsis comes from past posts in the Fukushima Updates and Commentary blogs of the Hiroshima Syndrome website, showing that the cesium risks have been exaggerated.

Wind Energy of No Use in Pacific Northwest

In the Pacific Northwest, hydro-electric power load follows when wind power is available, wiping out any emissions or cost benefit.  Over the last several years, we've spent about $5 billion and impacted over 50,000 acres of pristine public land for the privilege of throwing away 9 billion Kw-hrs of carbon-free energy every year.  We can be smarter than this.

That's it for this week's Carnival.  Thanks to all of our entrants for their hard work.

The 200th Nuclear Energy Blogger Carnival has been posted at Atomic Power Review.  You can click here to see the latest installment in a long running tradition among the top English language...

The 185th Carnival of Nuclear Energy has been posted at Atomic Power Review.  You can click here to see this latest installment of a long-running tradition among the top pro-nuclear bloggers...

The 184th Carnival of Nuclear Energy has been posted at The Hiroshima Syndrome.  You can click here to access this latest edition of a long-running tradition among the world's top...

The 158th Carnival of Nuclear Energy is up at Atomic Power Review.  You can click here to access the latest edition of this long-running weekly compilation of top posts from the internet's...