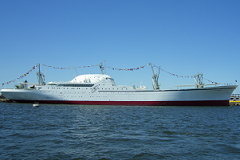 As I recall now, over twenty years later, we were requested to visit the curator of the museum (whose name I have forgotten) after M-Division (the Mechanical Division of the Engineering Department) on our ship performed some work there - painting spaces on the USS Yorktown, I believe.  The curator had a peculiar request and needed technicians who could work on electronic equipment.  Of course, since the Navy base had a major community outreach/awareness program going at the time I'm sure no one could have said no.

We (Reactor Controls Division) arrived on the Yorktown to be herded to the curator's office and then told that the museum was under pressure to have public announcing capability on the ships ... a good thing in case of emergency!  The big hitch was that the curator wished to use the long-dead original announcing equipment on board the ships to accomplish this task.  Our chief informed him that while we weren't exactly familiar with the old IC (interior communications) gear on the ships, we'd give it a look.

That first day, we all went down to IC central on the Yorktown, which was down many decks inside the armored citadel and next to DC (damage control) central, and examined the equipment.  As I recall, the assessment was essentially "fire hazard," and the idea was dropped for that ship.  We also examined the USS Laffey, a destroyer on site, and I do not recall the outcome of that inspection.

Our reward that first day was a tour of the engine room and control room of the nuclear ship Savannah - areas never toured by the public and generally off limits to anyone for years.  I was fascinated by how different the equipment looked, and the many different ways there were to skin a cat, you might say, without getting into detail.  We visited the control room, and noted the complicated requirements for outward rod motion.  We noted the hydraulic throttle control, and various other features of the control space which was odd in that its panels were mounted so that operators faced the rear of the ship. The front was covered by windows so that the operators could be seen by people (originally, passengers) from the glass gallery deck above the engine room.

This was not, of course, the first time I'd seen the ship.  I'd been to the museum numerous times before with family and friends, and while most of them concentrated one hundred percent on the historic warships, the white Savannah - a dulling, not gleaming white, diminishing with age but not yielding to yellow - stood out most to me.  It was like a swan in the midst of storks; it was completely out of place.  It was also almost completely ignored.  Its tour spaces were slight, the signage was abysmal, there was a different (lower) standard of cleanliness.  The ship wasn't abandoned... but it was a stepchild to most everyone.  Most everyone except me, that is.

The second day, showing up to Patriot's Point was optional, and only a few of us showed up.  My chief and I worked on the AN/WIC stack (Navy lingo for interior communications setup) on the SS-343, USS Clamagore and it worked.  He left, leaving just the curator and I to work on the only ship remaining - the Savannah.  I knew I'd have to see places off the tour, and I was thrilled walking down the pier toward the ship as he jangled through his keys.

I can't recall exactly where we gained access to normally off-limits places, but a sturdy lock opened somewhat rustily to reveal darkened passageways... areas that smelled of flaking paint, and musty, stale air.  I felt that if the ship lived, still, it lived in here - not in the antiseptic and frankly meager spots that were allowed on the unaccompanied tour route.  And live it did - even to the point of still having what appeared to be the final watchbill still on a bulletin board, and remains of what might have been a fuel, oil, and water report as well.  Staterooms had no furniture, or rusting racks with destroyed mattresses.  Paint flakes were everywhere.  Lights were nowhere.  The ship existed, here, as it really was - in a state of total neglect, but not quite yet dead.

Access to the wheelhouse was easy enough, and the communication equipment was not far from it; that equipment lit off right away.  I used the mike in the wheelhouse to speak the words "Test of the Savannah announcing system.. test one two three... " and the curator shot up and assured me that, although I'd heard nothing but my own voice in the stifling heat of the wheelhouse, the system had worked and he'd heard speakers around the ship broadcast it. He was almost gleeful. We decided it could work, but I recall telling him that I had no idea and could make no professional assessment whatsoever as to whether or not any compatible replacement equipment was available commercially.  What if something failed - what if anything failed?  Were there other units on board?  Was the equipment still in use in older ships, perhaps lake freighters?  We had no answers, but for the moment, it had worked.  All we were really trying to do was prove feasibility, anyway.  Maybe prove the guy right - or maybe just try a dream once.

The curator must have known that I was enamored of the ship, because we ended up taking quite a walk through the ship, talking about it, why it was there, why wasn't anyone interested in it, and its state of repair.  He told me there were dozens of things that were really impressive about the ship that few knew about - did I know that the portholes had double panes of polarized glass, the inner of which could be rotated to block the sun?  He showed me, and darned if they didn't work wonderfully... decades before electronically dimmed windows of any conception.  Did I know that the tables in the lounge were made of an early heavy plastic like Lexan, and were lit from the inside?  Did I know that the lounge had recessed lighting many years before it was common in homes and businesses?  There were many things he told me of, and some he pointed out, as we walked around slowly finding our way back onto the pier.

I had no idea, but that was the last time I'd see that curator or get to tour off limits places on the ship.  Apparently, commercial announcing equipment was purchased for the ships - and he'd moved on by the time we got back from the next patrol.  But I never got that feel out of my system; never forgot those two days.  Every time I toured the ship again, afterward, I walked even a little slower, just to get the most out of the now-not-enough of the ship I could see.

Years later, after I'd gotten out of the Service, I read somewhere that the ship had actually left Patriot's Point, and been moved to the James River Reserve Fleet - maybe not exactly the death knell, but not even as good as the "Island of Misfit Toys," either.  I wondered how that had been allowed to happen... why was the ship taken out of Patriot's Point?  Of course, the reasons were perfectly practical and sensible, having to do with condition, cost, and upkeep - but that rang hollow to me, knowing the ship's historical place (which has been written about so exhaustively that duplication of the story here isn't necessary.)

What was worst to me, personally, was something rather selfish, but inescapable:  Would I ever see her again?  Better yet, would I ever set foot on her again?  Many years would pass with that question unanswered.

And out of the blue, within the last six weeks or so, that question was answered definitively:  Yes, and not only yes, but I will do so Thursday.  THIS Thursday, November 14th, 2013.  Thanks to the American Nuclear Society, the Maritime Administration and some supreme luck, I'll be touring the ship with an ANS Technical Tour group.  I'll enjoy every minute, and I'll let you go along with me by writing - and with luck, with both photo and video.

What matters about the N.S. Savannah today isn't that she wasn't, in the final analysis, economical to operate; what matters rather is that the promise the ship offered when built wasn't realized, but was also never withdrawn.  That promise exists now, today - in 2013 - exactly as it did when the N.S. Savannah toured the world's oceans, proved the safety and reliability of seagoing nuclear power in a very real way that the Navy ships (considering security) couldn't effectively do, and secured dozens of agreements with nations to allow nuclear powered merchant shipping into their waters.

Under restoration, the way she looks now, as compared to how she looked when pulled out of service - or worse, as I remember her at the end of the 1980's and the start of the 1990's - is a lot more like that ship which blazed a trail that no one else trod back in the early, hopeful days of nuclear energy.  How does she look up close?  Inside?  How does she feel, underfoot?  We will know soon.  I will know soon, rather - and I will show you. 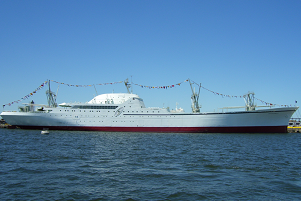