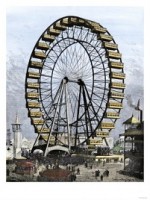 ANS Nuclear Cafe is proud to host the 179th Carnival of Nuclear Energy this week.  This long running tradition features top posts and stories by pro-nuclear authors and bloggers each week, and provides a window into the foremost issues in nuclear energy and nuclear science in a single convenient post.  Here are this week's entries!

Babcock and Wilcox Nuclear Energy is to work with nuclear technology company Lightbridge in developing a pilot plant for manufacturing metal fuel for light water reactors.

Lightbridge has developed an advanced metallic fuel, made from a zirconium-uranium (Zr-U) alloy, which uses a unique composition and fuel rod geometry enabling it to operate at a higher power density than uranium oxide fuels in use today.

Extending the fuel cycle length to 24 months or longer while simultaneously increasing the power output by up to 17% in existing pressurized water reactors (PWRs), including Westinghouse 4-loop reactors, which are currently limited to an 18-month fuel cycle; Enabling increased reactor power output (up to 30% increase) without changing the core size in new-build PWRs.

They have a detailed pricing study of providing such upgrades to 16 pressure water reactors.

At Nuke Power Talk, Gail Marcus reflects on a recent article citing continuing challenges for women in engineering.  As someone who pursued a career in engineering when the number of women in the field was far smaller than it is today, she confesses to being surprised to learn that there are still such barriers.  She reports some of her own experiences, particularly some comments she had to field during job interviews "back in the day."

State of Vermont Sues in Favor of Federal Pre-Emptive Regulations

The leaders of electric power companies owning half of Europe's

generating capacity have joined together to inform the European Union

that its policies are leading to a dangerously unstable power grid.  In

addition, the power suppliers are concerned that their continent is not

about the response of customers that continue to see their electricity

bills rise.  The European utility CEO's are calling for reform of the

Rod Adams found two first hand reports from nuclear trained US Navy sailors stationed in Yokosuka, Japan on the USS George Washington in March 2011. They describe their efforts to monitor their ship and shipmates for radioactive material fallout and explain why high level Navy decision makers made politically correct decisions to overreact when low levels of radiation were detected.
.
The Hiroshima Syndrome - Les Corrice
.
"Lady Barbara Judge causes token 'balance' in Japanese Press"
Something has happened that seems to have caught the anti-nuclear Japanese press 'off guard.'  Her name is Lady Barbara Judge of Great Britain.  As a result, Japan's news media is resorting to historical methods of reporting with 'balance,' giving her positive statements token mention at the end of each article.
.
Atomic Power Review - Will Davis
.
SCE Requests Arbitration
.
Southern California Edison, having been rebuffed in its request to MHI to allow a contractually stipulated audit by SCE of MHI's processes and procedures has taken the next step - it has requested arbitration.  Details at link.
That's it for this week's Carnival!  Thanks to all of the authors for their submissions this week.
.
Share:
LinkedInTwitterFacebookEmail