On September 12, 1933, slightly more than 80 years ago, Leo Szilard was the first person to imagine a reasonable mechanism for releasing the vast quantities of energy known to be stored in atomic nuclei. As it turned out, his concept worked the first time it was tried on December 2, 1942.

Szilard's inspired thought occurred on a dreary fall afternoon in London at the intersection of Russell Square and Southampton Row. Earlier that day, Szilard had read an article in The Times that described a talk given by Ernest Rutherford about breaking down atomic nuclei using accelerated protons. There was a brief mention in the article about the possibility of using recently discovered neutrons to transmute nuclei, but the article gave the impression that Rutherford thought that fast-moving protons were a better option because they could be accelerated with reasonably achievable voltages due to their positive charges. (Note: James Chadwick announced his discovery of neutrons on February 27, 1932, in a letter to the British science journal Nature.)

According to the newspaper account, Rutherford dismissed any possibility that the process of bombarding atomic nuclei would result in a net energy output, even if each individual reaction produced densely concentrated energy. The total amount of energy required to get the protons up to the required velocity would be substantially more than the amount of energy released when the nucleus broke apart. According to Rutherford, anyone who believed that nuclear reactions would be a potent source of useful energy was talking "moonshine".

Not only did Szilard have a natural tendency to regard such assertions as a challenge, but Szilard had many motivations for thinking about ways to liberate atomic energy. He had been engaged for some time in thoughts about releasing the energy stored in atomic nuclei as a means of producing the power required to travel into space. Those thoughts had been inspired by conversations with Otto Mandl about ways to save mankind from itself by heroically succeeding in developing the means to leave our home planet.

He had read a novel by H. G. Wells titled The World Set Free that described a world in which atomic energy had been liberated in the service of mankind, but Szilard claimed that he considered that story as mere fiction and did not credit it as any part of his inspiration. Coincidentally, there is a line in Wells's book, which was published in 1914, that predicted that someone would solve the puzzle of releasing atomic energy as early as 1933 with a combination of "induction, intuition and luck".

The problem which was already being mooted by such scientific men as Ramsay, Rutherford, and Soddy, in the very beginning of the twentieth century, the problem of inducing radio-activity in the heavier elements and so tapping the internal energy of atoms, was solved by a wonderful combination of induction, intuition, and luck by Holsten so soon as the year 1933.

Finally, Szilard was a recently emigrated refugee from Nazi Germany. He was a native Hungarian, but had been living and working in Germany since the end of the first World War. He had been thinking deeply about the implications of the Nazis developing weaponry based on some of the nuclear physics concepts that he and his colleagues had just begun to recognize experimentally.

As Szilard later recounted the story, when he reached the intersection of Southampton Row and Russell Square a red light caused him to pause, giving time for his fertile imagination to engage. Then the idea struck him: If a neutron entered an atomic nuclei, and the subsequent reaction released two neutrons, it would be possible to produce a chain reaction. Since neutrons have no charge, each of those newly released neutrons would be able to travel freely through matter until they struck another nucleus.

If there was a sufficiently large mass, with a sufficient purity of the material whose nuclei released two neutrons every time it was hit with one neutron, Szilard realized that there was a distinct potential for industrial-scale power sources. He recognized immediately that there was also a possibility that the reactions could be produced in a manner that was rapid enough to cause an explosion of great force before the material was scattered and the reaction stopped.

At the time of his creative thought, Szilard had no idea what kind of experiments would be needed to find the right material or who would be willing to fund the experiments. He did not have a job, did not have a laboratory, and did not have much experience in developing experiments. All he had was enough money saved up from previous work to support himself for about a year while living in a London hotel, taking long baths, keeping up with published papers and eating out at restaurants. He spent the next few months after September 1933 thinking, reading, and occasionally writing down his thoughts. This process was similar to that which Szilard had followed when he earned his PhD less than a year after starting his focused study of physics.

On March 12, 1934, Szilard applied for a patent that was eventually merged with several other patents into Improvements in or relating to the Transmutation of Chemical Elements. The key improvement that Szilard proposed over the work done by people like Rutherford and the Joliot-Curies was using neutrons and chain reactions instead of protons or alpha particles.

It is unfortunate that Szilard's contribution to the improvement of the human condition has been too often overlooked.

Note: Much of the above is adapted and summarized from Richard Rhodes, "The Making of the Atomic Bomb" 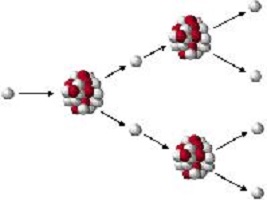