On the first day of July, the NuScale-centered effort became exponentially larger as that firm joined with Energy Northwest and UAMPS (Utah Associated Municipal Power Systems) to explore the complete design, construction, and demonstration operation of NuScale SMR reactors at the Idaho National Laboratory. The effort is named the "Western Initiative for Nuclear," or WIN for short.

According to statements by NuScale Power chief commercial officer Mike McGough during a July 1 teleconference, the beginnings of WIN stretch back over two years to a Western Governors' Association policy statement that brought new nuclear energy into focus and priority status. A primary goal of WIN is to "accelerate SMR's to the marketplace," according to McGough. Inclusion of Energy Northwest in the WIN consortium brings direct operating experience with nuclear energy to the effort (in the form of Columbia Generating Station, a General Electric boiling water reactor-5 that entered commercial service in 1984), with the direct expectation that Energy Northwest would operate the SMRs when built.

Ted Rampton of UAMPS (which has 45 member companies) noted during the teleconference that the UAMPS involvement is plainly because "members do need future baseload generating capacity," and because UAMPS' "Smart Energy Initiative" guides it to examine multiple kinds of resource alternatives. UAMPS's considerations in backing the NuScale SMR design involved considerations of "size, configurable to fit requirements, economy and safety." Rampton, during Q&A, noted that at this time his company's involvement is "investigatory in nature only," with no immediate monies involved and no capital expenditure presently projected as yet.

Utilities aren't the only interested party in this effort, either. Rob Simmons, representing the office of the governor of Utah, was present at the teleconference and expressed the governor's office's interest in the project as a very direct and real matter. According to Simmons, the advantages to prioritizing such a project for Utah include "flexibility, and integration opportunities in a rapidly changing energy environment," which might be taken as a hint that load-following SMRs (which the NuScale surely is) would be a good fit on grids with substantial renewable (solar, wind) inputs.

McGough clearly stated that the Idaho National Laboratory is NuScale's "preferred startup location" for its design, saying that there is "no better place" to locate this initial effort. The plant itself would be owned, it is expected, by a consortium of utilities, while being operated by one of the owners with nuclear experience or else by a "qualified third party operator"-either of which almost surely will be Energy Northwest. He described the siting at INL as "the best, most feasible first step;" later, during the Q&A session, it was noted that there is in fact expected future energy demand in the area and that the plant (expected to comprise six to 12 reactors, and rated between 270 and 540 MWe) could commercially sell power, due to the fact that there are coal-fired generating assets in that area that are expected to be retired.

Of course, the Idaho National Laboratory has hosted very many prototype and development reactors. Known for many years as the National Reactor Testing Station, the site hosted many well known early nuclear prototypes such as the Experimental Breeder Reactor and EBR-II, the Special Power Excursion Reactor Test, BORAX (Boiling Water Reactor Experiment), and the U.S. Navy STR S1W (S = submarine platform, 1 = first generation core designed by the contractor, W = Westinghouse was the contracted designer), A1W (A = aircraft carrier), and S5G (G = GE) plants. According to McGough, the site has "hosted over 50 reactors over a span of 60 years."

According to McGough, the plan is to have the first reactor operational in the 2024 time frame. NuScale had submitted the Funding Opportunity Announcement (FOA) request to the DOE over the previous weekend (as had Westinghouse and Holtec); McGough expects to apply to the NRC for design certification in two years, describing that certification as "the long pole in the tent."

In the Energy Northwest press release, the company's CEO Mark Reddemann is quoted as saying that the successful completion of the WIN effort at INL "could act as a catalyst for development of additional SMR projects with NuScale and others." He added that "building one somewhere in the Northwest today may lead to building elsewhere tomorrow." Energy Northwest had initially intended for a NuScale SMR to be built at its Columbia Generating Station-in a way, a direct parallel to the competitor Westinghouse SMR, which according to present plan may well be built first at Ameren Missouri's Callaway Energy Center alongside Callaway-1, a very late Westinghouse pressurized water reactor plant that was part of the SNUPPS (Standardized Nuclear Unit Power Plant System) program. While the new WIN effort has shifted initial focus to INL, Reddemann points out that development of that project still has very significant positive implications for Energy Northwest's customers, since, as he said, "if NuScale secures DOE funding, this effort will be an important step toward bringing new nuclear to Washington state when we need it... when that day comes, we'll have the right people with the right expertise in the right place to make it happen."

The competition has not been idle. Perhaps the Westinghouse - Ameren - Missouri collaboration has received the most notice, but Holtec just yesterday (July 10) announced that it has brought South Carolina Electric and Gas, and Chicago Bridge & Iron (who will act as architect-engineer for the plant, which is planned for construction at the Savannah River Site) into partnership with its own local economic development organization, NuHub. NuHub had previously worked with NuScale, but shifted its selected design to the Holtec SMR-160 earlier this year, according to Nuclear Street News.

The field of competitors to win the second round of DOE funding is certainly deepening, with reactor vendors now lined up with utilities and local economic development groups in the hope of presenting the best possible likelihood of completion before the DOE's FOA process is really begun. One thing is certain-the number of utilities and organizations who believe in the SMR concept is growing continuously, which is a good thing for nuclear energy in the United States.

The present DOE offering is for funding and assistance through design licensing only. Click here to see the DOE page for the program. 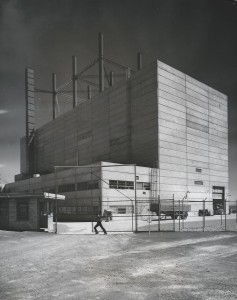 STR Mark 1, later known as S1W, pictured at National Reactor Testing Station, January 20, 1954. NRTS, now known as Idaho National Laboratory, has long been known for siting "first of a kind" or prototype reactor plants. It has remote location and existing infrastructure ideal for such projects. Wirephoto in Will Davis collection.