4) Don't be attached to the consequences

This sequence seems very relevant to my experience at the American Nuclear Society Annual Meeting in Atlanta.

Showing up at the ANS Annual Meeting 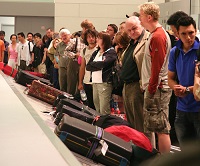 I had a hard time showing up at the meeting, because my plane was six hours late in taking off! I was massively late to a committee meeting that I planned to attend. Even after I arrived, I had a hard time paying attention, because the airline also had misplaced my luggage. Not having my stuff distracted me.

I was off to a bad start, for sure. But at least I did show up and tried to pay attention.

A stark fact cast its shadow on the meeting. Since a year ago, four plants from the American nuclear fleet have gone off-line. Granted, four units are also under construction. However, owners have deliberately slowed the construction schedules of other units that were planned or were being refurbished. Some units have been cancelled.

The truth isn't always friendly. But it's the truth.

Telling the truth at the plenary session 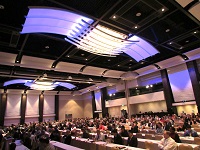 Top nuclear professionals and executives spoke at the opening plenary session that started the ANS meeting. The probable future price of natural gas was one of the major topics.

In the section that follows, I will attempt to summarize the talks given by key nuclear industry regulators and executives at the plenary session.* 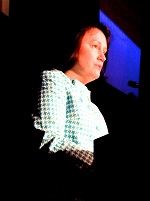 The Honorable Kristine L Svinicki, Nuclear Regulatory Commission commissioner: We have to look at what happens in a flat economy. We may have to rethink our reasons for regulations. Regulations should be evidence-based and data driven.

SONGS follow-up: Andrea Jennetta, publisher of Fuel Cycle Week, asked Svinicki about the role of the NRC in the closing of the San Onofre Nuclear Generating Station (SONGS).  Svinicki replied that the commissioners have asked the NRC's Atomic Safety and Licensing Board (ASLB) to vacate the ASLB order that required SONGS to get a license amendment. Svinicki could not comment more, because the matter is still active and being litigated by plant opponents. 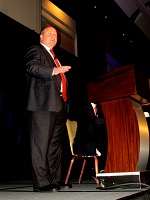 Daniel Roderick, president and chief executive officer of Westinghouse: Subsidies for wind and solar create "missing money" in the market. Shale gas was all dug at once, creating a gas glut, a gas bubble. The current low gas prices are not sustainable. We should also be rethinking nuclear plant life extension: Coal plants have operated for 100 years. Annealing-in-place of the pressure vessel could extend life.

Great quote: "We (the nuclear industry) are 200,000 people strong. We have to tell our story. We cannot just be defensive." (Roderick also unveiled a wonderful pro-nuclear commercial from Westinghouse. You can see it here.

Steve Kuczynski, president and CEO of Southern Nuclear: Kuczynski showed inspiring slides of the Plant Vogtle construction. Due to the economic slowdown, interest rates are down, material costs are down, and labor is easier to find. In some ways, the economic slowdown has helped Vogtle. Our original idea was that a post-Vogtle rate hike would be 12 percent, and now it is 6-8 percent. This is the important part, not total construction cost. Vogtle is a major employer in Georgia at this time. 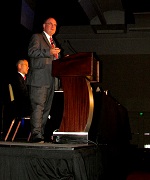 Eugene Grecheck, vice president Nuclear Development, Dominion Generation: Grecheck was in the Kewaunee Power Station control room during final reactor shutdown. Employees were professional to the end. The Kewaunee plant was one of the best in the fleet, but it lost money every day it operated. There were purely economic reasons for Kewaunee shutdown. If this plant were in Virginia, it would still be operating.

Grecheck on natural gas: Grecheck does not think shale gas is a "bubble" or that prices will be higher soon. Gas experts at utility commissions testify that gas will be even cheaper in future. Who is right? However, replacing the current nuclear fleet with natural gas would take 20 percent of natural gas in United States. This would make electricity (and other uses of natural gas) very vulnerable to supply disruption.

Edward Moses, principal associate director, National Ignition Facility (NIF) & Photon Science Directorate: The NIF inertial confinement fusion research device can demonstrate a 1000-MWe fusion plant capacity; the facility can concentrate 192 laser beams achieving ten to the eighth kelvin temperature at a single point-Moses advised to please see http://lasers.llnl.gov for more detailed information. (Also, true to humorous form, Moses noted a change from the old NIF project name "Project Sherwood"... as in, "Sure would be nice if it works!" - but in reality, Moses was quite energized and optimistic.)

Amir Shahkarami, CEO Exelon Nuclear Partner, and senior VP Exelon Generation: Where a unit is located has a strong influence on whether or not it is profitable. One Exelon unit is running at a loss. (Note that this echoes Roderick's statement that if Kewaunee had been in Virginia, it would still be operating.) Also see Will Davis's coverage of the session here.

A large group from the ANS meeting went to a showing of Pandora's Promise on Tuesday night. That movie is a major example of telling the truth!

Denver Nicks of Power Engineering Magazine went to the movie with the group from the meeting, and here is his reaction to the movie (and to the group): Pandora's Promise: My night at the movies with the American Nuclear Society

Not being attached to the consequences

Clearly, for our energy future, a great deal hinges on the future price of natural gas. Will the shale boom continue to supply low-cost natural gas, or will the price rise? The fate of many coal and nuclear plants may hinge on this question.

Regulation is also important. Instead of giving the usual nuclear examples, let's look at a coal plant in my area. Merrimack Station in New Hampshire is the local coal station that we visited in my course, All Around the Coal Boiler. When we visited in 2010, Merrimack was a baseload plant.

A new law required Merrimack to install a $400-million scrubber to abate mercury and the remainder of the sulfur. Now, with cheap natural gas on the grid, Merrimack's power is too expensive, and the plant runs only 20 percent of the time.  The company that owns it may be forced, by further regulation, to sell the plant at a loss. A recent Public Utilities Commission report suggests that Public Service of New Hampshire should dump its power plants.

In other words, regulation and the price of natural gas are both crucial for the future of nuclear (and coal, for that matter). Neither of them is in our control.

So what is in our control? Running the plants well (although that didn't save Kewaunee). Communicating to the public about the clean-air advantages of nuclear (although the probable addition of polluting natural gas plants to the Los Angeles basin didn't save SONGS). In telling the truth, I will say that there is nothing the nuclear industry (or the coal industry, or the gas industry) can do to totally guarantee itself a good future.

Public Utilities Commissions are already concerned with the grid's over-concentration on natural gas. While the world as a whole is burning more coal, it seems unlikely that new coal plants will be built in the United States, except perhaps expensive plants with new types of pollution and carbon controls. In short, nuclear is an important part of the energy picture now, and will remain so.

As nuclear professionals, we must continue to show up, pay attention, and tell the truth. We cannot necessarily think our efforts will have instant rewards (don't be attached to the consequences) but in the long run, nuclear will be the force that powers the future.

By the way, my own prediction on shale gas prices is that the "long run" starts within five to ten years.

*I do not have a copy or recording of this meeting or the presentations, so I am depending on my memory and from the tweets of several people (including me, tweeting as @yes_VY) who were live-tweeting the plenary session. Thank you to Shawn Downey (tweeting as @ansct), Will Davis (tweeting as @ANS_org), Suzy Hobbs Baker (tweeting as @popatomicstudio), Andrea Jennetta (tweeting as @NuclearBuzz), and Cal Abel (tweeting as @Cal_Abel), at a minimum.