Prior to the shutdown, Dominion had announced its decision to change the plant's status (after the shutdown) to what is called SAFSTOR, which, just as it sounds, implies "Safe Storage." The Nuclear Regulatory Commission's official definition of SAFSTOR reads as follows: "A method of decommissioning in which a nuclear facility is placed and maintained in a condition that allows the facility to be safely stored and subsequently decontaminated (deferred decontamination) to levels that permit release for unrestricted use." This definition implies that a long period of time will be allowed to elapse before serious and heavy dismantling and removal of key plant components is performed, and before the many site structures are completely demolished and removed.

While the intensity of radiation around the immediate vicinity of the reactor and steam generators is slight compared with when the plant was in operation (and those areas unoccupied), it is not insignificant. The time period between the final reactor shutdown and the beginning of the disassembly of the 'heart' of the plant will help in a major way to reduce the radiation exposure of the people who will be required to perform the work-not a small consideration, even in a relatively small nuclear station such as Kewaunee.

Briefly, in disposing of a shut down nuclear plant, there are three options: Decommissioning immediately, which means relatively quickly launching into demolition; SAFSTOR, as described above; and ENTOMB, wherein a plant and some of its components are sealed and abandoned in place for a long period of time or permanently. (Piqua and the Hallam Nuclear Power Facility are two examples of former commercial nuclear stations in this status.)

Dominion has, under federal law, 60 years to complete the entire complicated and expensive decommissioning process, which will see the nuclear plant site returned to "green field" status (releasable for any use) with the exception of a dry cask type spent fuel storage facility. According to Dominion's latest 10-K filed with the U.S. Securities and Exchange Commission, decommissioning cost overall will total $680 million; the decommissioning fund presently has roughly $578 million, with the rest expected to be made up by future earnings. Dominion took a $281 million after-tax charge in the third quarter of 2012 as a result of deciding to decommission Kewaunee.

Kewaunee is not by any means the only nuclear plant that will be in, or has been in, the SAFSTOR condition. There are a number of other plants that were placed in this condition either to prevent disruption of the operation of other plants on the same site and/or take advantage of economies of decommissioning multiple reactors at once (Dresden Unit 1, Peach Bottom Unit 1, and Millstone Unit 1 all fit in this category, since they are in SAFSTOR and occupy sites that in all cases contain two other operating nuclear plants.) Other plants, such as Dairyland Power Co-Op Genoa No. 2, which was much more commonly known by its Atomic Energy Commission title as the Lacrosse Boiling Water Reactor, was in a state of modified SAFSTOR for many years as most of the heavy work was deferred while some limited disassembly went on in irregular phases.

A Post-Shutdown Decommissioning Activities Report (PSDAR) will be submitted to the NRC by Dominion within two years, which lays out expected procedures, timelines, and costs. Ninety days after the NRC receives this report, the plant owner could conceivably begin heavy demolition and component removal if the disposal choice were immediate decommissioning. However, in the case of Kewaunee, the plant will remain in a monitored state, with (very likely) some component removal taking place slowly.

A Dominion spokesman told Platts that the expectations are that Kewaunee's spent fuel pool contents will be moved entirely to dry cask storage on site by 2020. Much later, in June 2069, heavy dismantling of the plant will begin with completion expected in August 2072.

The difficult work will begin when Dominion finally commences the physical dismantling of the plant. Many readers may not be aware that a number of large (and small) nuclear power plants have been not only shut down, but completely demolished and removed. The challenges encountered at each included both expected and unique problems; the work is complex and time consuming, but is proven to be able to release a site completely for other use. A few examples are in order:

Big Rock Point: This plant (designated by the American Nuclear Society in 1991 as a Nuclear Historic Landmark) was an early General Electric boiling water reactor plant in a remote area of Michigan. The plant operated successfully from 1965 through 1997. Over the next nine years, Consumers Power completed major site surveys and engaged in the complete demolition of the plant. Heavy components such as the reactor vessel were shipped to South Carolina for burial. Thirty-two million pounds of concrete were removed; 53 million pounds of material labeled as low-level radioactive waste were transferred to storage facilities in other states.  Fifty-nine million more pounds of clean (uncontaminated) building materials were transported to landfills and buried. The entire 560-acre site was returned to "green field" or a natural state in August 2006, except for the independent spent fuel storage facility.

Connecticut Yankee: This plant, when shut down in 1996 after 28 years of operation, was designated for immediate decommissioning with no SAFSTOR period. The project to return the site (except for spent fuel storage) to green field took place over the period 1998-2007, and 525 acres of natural terrain were the result. Small sections of the property have begun to be turned over to other owners, such as the U.S. Fish and Wildlife Service. 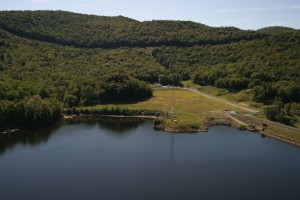 Yankee Atomic Electric: The nuclear plant constructed by this company was among the very earliest commercial power stations, yet operated for 30 years. After final shutdown in 1992, the plant began decommissioning the next year. From the official website of the plant: "Since the start of physical decommissioning in 1993, more than 21 miles of piping and tubing, 1071 valves, 8569 pipe hangers, 321 pumps, and 33 miles of conduit and cable tray have been removed. In addition, six large components weighing a total of more than 500 tons were also removed. Some of the material, including the large components, was sent to the Barnwell, S.C. low-level radioactive waste disposal facility for permanent disposal. Some of the metal was sent to a processing facility in Tennessee." Over 1700 acres have been released by the NRC and are being considered for future use in a scenic, natural environment.

Eventually, the most solidly constructed components of Kewaunee will have to be removed; these are the reactor building and the components inside of it. Projects in the past have encountered special problems and considerations in this type of work, but enough ground has been laid in past years to provide ample experience in this project. Here are some interesting reactor plant related project links:

The International Atomic Energy Agency hosts an excellent presentation by Bluegrass on the processes used to remove the reactor vessel at the long-SAFSTOR but now decommissioning Lacrosse BWR in Wisconsin; see it here. Particular problems were encountered with very small clearances around the reactor vessel, especially at its lower head. 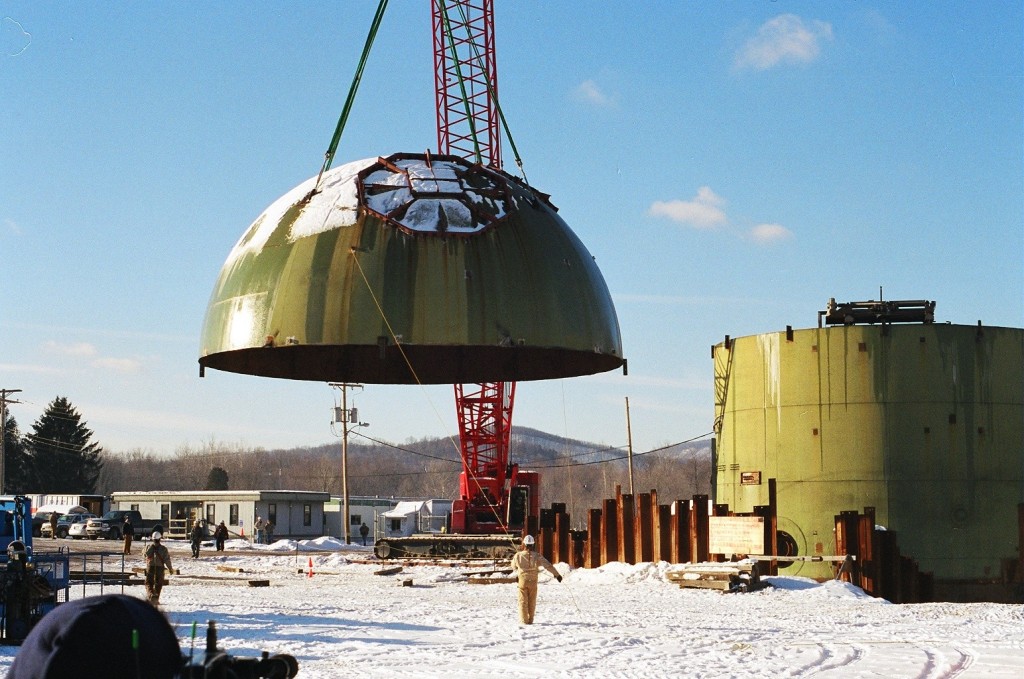 GTS Technologies has an impressive set of web pages showing the work it did to remove the reactor containment building at the former Saxton nuclear reactor in Pennsylvania.

Kewaunee employees right now aren't thinking about whether or not someone will, eight or nine decades from now, be having a picnic or plowing a field on the spot where the plant's turbine building once stood. They're worried about where they'll find work-Reuters has reported that 200 of the 630 workers will be laid off at the end of May, 100 more in another month. By the middle of 2014, the plant will have just under 300 permanent workers on site; this number will remain (along with outside contractors) for the duration of the procedures. Dominion has not yet announced whether or not it intends to contract some or all of the work to an outside company such as EnergySolutions, whose ZionSolutions unit is presently decommissioning Zion Nuclear Station.

Long after the memories of the stress of the workers' movement and breakup of the Kewaunee Station's family is over, it's the intent that the plant site will be returned to as completely natural a state as is possible. As we've seen, even though this work will provide many challenging days ahead, it's not only possible but proven-and perhaps, if we're lucky, some entity will erect a sign at the site to tell future generations that a complete nuclear power station was built and operated here for many years, and then completely removed. It will be proper if a sign is needed in order to be able to tell.

(For more information on the nuclear plant decommissioning process, you can read the NRC's excellent pages on the topic by clicking here. In addition, other sites that have decommissioned include Maine Yankee, Rancho Seco, and Trojan. Part of the former Rancho Seco nuclear plant site is now the Rancho Seco Recreational Area.)

Will Davis is a consultant to, and writer for, the American Nuclear Society; he will serve on the ANS Public Information Committee 2013-2016.  In addition to this, he is a contributing author for Fuel Cycle Week, and also writes his own popular blog Atomic Power Review. Davis is a former US Navy Reactor Operator, qualified on S8G and S5W plants.