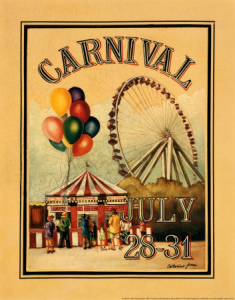 The ANS Nuclear Cafe is proud to host the 153rd edition of the Carnival of Nuclear Energy Bloggers today, April 22, as another Earth Day is celebrated focusing on our stewardship of the environment.

The Carnival is a rotating feature appearing weekly on a succession of the most prominent pro-nuclear blogs.  Each week, the top English-language bloggers point up their top posts for the week; as a result, by following the Carnival, you can get a handle on what these authors think were the most important news items and issues in that time frame.

Because it's Earth Day, we'd like to direct readers briefly before we launch into the Carnival entries to this position statement issued by the American Nuclear Society on the contribution of nuclear energy in the reduction of carbon emissions.  It will only take a moment to read, and might well be worthwhile.

And now, off to the Carnival!

A team at Tokyo University's Science Research Dept. reports that Fukushima resident's exposures due to ingestion since October, 2011, have been negligible. In addition, the results indicate that previous official exposure assessments for the prefecture's most contaminated communities have been greatly over-estimated. Unfortunately, the Japanese Press has refrained from covering this good news.

China's Commercial Reactors:  China forges ahead on exporting its ACP1000 reactor plant which will boast as much as 85% content manufactured in China, and a cost lower than other Gen III plants by 10%.

Japan's weakened yen is pushing a sense of urgency for the restart of nuclear plants across Japan; the trade deficit continues to widen without export of manufactured goods, and Japan's broader economic future may be at stake.

Germany's economy heavily at risk because of its energy plan.  Some wind projects have been delayed, some wind companies wrecked, renewable energy surcharges have doubled over three years, and delays in building wind turbines have led to the bankruptcy of Nordseewerke.

This week, Gail turns a spotlight on some of the issues associated with renewable energy.  Although it would seem that she is straying from nuclear topics, she points out that the possible concerns and drawbacks associated with nuclear power--and with fossil fuels--are discussed in the press far more often than the potential drawbacks to renewables, so she feels she is balancing the playing field.  She discusses a book by Ozzie Zehner that analyzes the close links of renewable energy to fossil fuels, and a study by Paul Krugman that discusses the tendency to underestimate the costs and difficulties of new technologies.

Nuclear Opponents and their view of Hydro in Vermont:  "I know and you don't, so hah hah!"  At a recent Public Service Board hearing about Vermont Yankee, one anti-nuclear lawyer claimed he knew about important advances in small hydro..  and that he didn't have to share his knowledge with anyone else in the hearing room.

Suzanne Hobbs Baker - "Marriage and Nuclear Waste Management" - what marriage can teach us about the nuclear waste problem.  A very personally oriented and frank discussion by Baker on motivating engineers, communicating about processes, closing the fuel cycle, dreams, and the most unlikely vacation destination in France!

Will Davis - "The Hook-Ons"  Present developments in small, easily transported reactors known as SMR's and the desire to expand the use of nuclear energy to reduce emissions may have had a precedent of sorts.  Davis explores early small reactors built to add to existing facilities, with very rare illustrations and details.

MOX Fuel Project best option for Nonproliferation and Budget goals.  If the United States is going to honor its international nonproliferation agreement with Russia, then the MOX project is the best option based on time, money, security, and environmental goals.

Kewaunee needs a "deux et machina"; rising natural gas prices not quite enough.  Adams writes a thoughtful epitaph of sorts detailing some of the decision-making he's discovered that led to the (impending) shutting down of this otherwise fully operable nuclear plant, and also details last-minute efforts to keep it open and operating.

That's it for Carnival 153! We hope you've enjoyed it and been inspired.  Look for the next edition next week on Atomic Power Review.