The 144th Carnival of Nuclear Energy 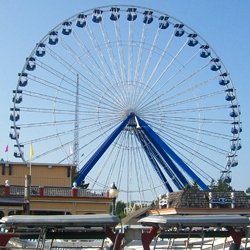 ANS Nuclear Cafe is very proud to host this week's Carnival of Nuclear Energy.  This weekly feature showcases the best English-language pro-nuclear blogs and articles, and gives a snapshot of what the most experienced and outspoken nuclear advocates feel are the top issues of the times.  This week, as with all of the others, there's plenty of variety in the breadth of topical material.

"Chemophobia and radiophobia's shared cultural roots":  All too often, "natural" sources of risk from radiation and chemicals are ignored in favor of far lesser risks from "synthetic" sources. What's behind this common cognitive bias that leads people to perceive the risk of "natural" sources of radiation differently than human-created sources - and what can be done about it? Steve Skutnik explores the details.

"Is Biomass Green?":  This week, Gail Marcus continues the theme she started last week of "unanticipated" effects of some of the technologies that many people consider natural and benign.  This week's blog focuses on several recent reports on biomass.  While some of the conflicts with food production have been discussed for some time, an issue has recently been raised about the sustainability of algae-based biomass.  Although initially touted as a way to overcome the agricultural concerns, biomass from algae raises still another set of concerns.  Although this is not a nuclear issue per se, one cannot help but see parallels, in that every source of energy has some impacts.

"Solve for X; New Fusion Reactor."  Lockheed Skunk Works is developing a new design of small and compact fusion reactor it hopes to have on the market within about a decade.  The system would fit on a truck  - unlike 30,000 ton Tokamak designs, and have an output as high as 100 MW.  Includes video.

"Why problem-solving is more than finding technical solutions, or: When nuclear supporters are their own worst enemies:"  Suzy Baker on some challenges that can divide the growing pro-nuclear movement -- and some advice on what to do about them.  Interesting comment section.

"Responding to system demand:"  Will Davis tackles a myth that nuclear power plants cannot "load follow" -- an attribute likely to be of increasing importance in our future reduced-greenhouse-gas energy mix.  Interesting comment section.

Transitioning to Renewable Power: What It Might Look Like   At Yes Vermont Yankee, a guest post by Guy Page explores the Five Per Cent Solution.  What would five percent more renewable power look like in Vermont?  How many wind turbines, solar farms, and small new hydro plants for 5% of Vermont's energy needs?

Radiation Protection Pills:   Robert Hayes discusses that point where nuclear science, chemistry and human physiology meet - health physics.  Intake of and treatment for iodine and tritium are discussed, as are other radionuclides.  Interesting links for more information are also provided.

Pilgrim Outage due to Blizzard:   The recent severe storm in the Northeast caused widespread power outages, and Pilgrim Station was forced to shut down.  The details of the event are given, along with a fascinating link to an NEI page that details some of the very many severe weather events US nuclear plants have experienced and withstood.

Nuclear Energy's Value Proposition Still Strong.   This guest post at NEI Nuclear Notes by NEI Senior VP - Communications J. Scott Peterson details the value that nuclear energy brings to us right now, and for the future.  There are many ways that nuclear energy benefits the grid and the nation beyond just being able to provide electricity all day and night, and Peterson details these many added (but often not publicly realized) benefits in a thorough and thoughtful post.

The Meteorite Over Russia and Its Nuclear Facilities

Another Economist for Nuclear Energy

That's it for this edition of the Carnival.  Please help spread the word about this rotating event through your favorite social media outlet.