There have been some significant developments in a number of ongoing news stories this week; we'll touch on three highlights in this wrap-up.

Crystal River-3 to be retired, placed in SAFSTOR 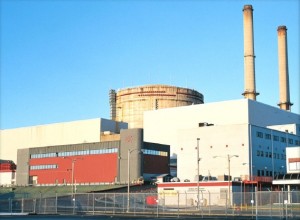 On Tuesday, February 5, Duke Energy announced that it would retire and decommission its Crystal River Unit 3 nuclear plant in Florida. This plant has been shut down since 2009 after serious problems with concrete in its reactor building came to light; the problems were discovered after the company made cuts in the reactor building to replace the steam generators in this 2609 MWt/838-MWe Babcock & Wilcox plant. Repairs were made to the section originally discovered damaged. Subsequent to the repair, while tension was being applied to the building, another section failed in March 2011.

From the Nuclear Regulatory Commission's plan for oversight of the facility while in extended shutdown, we get the following account of the March failure:

On the afternoon of March 14, 2011, the licensee had completed the first retensioning sequence (Sequence #100, Hoop Tendons 42H41, 62H41, and 64H41) of the final pass (Pass #11). Per procedure, the licensee was waiting for the containment building to stabilize before beginning the next sequence and monitoring the structural behavior of the containment building via acoustical emissions monitors and strain gauges, specifically placed at various points of the structure to detect any abnormal/unexpected response to tendon retensioning. During this monitoring period, the strain gauges indicated an increase in strain and then failed high, and the acoustic monitors indicated a high level of acoustic activity in the bay bordered by Butresses #5 and #6 (Bay 5-6). The phenomenon reportedly lasted for about twenty minutes. The licensee conducted impulse response (IR) non-destructive examination NDE techniques to determine the condition of the wall in Bay 5-6. The IR scans of the bay determined that there were numerous indications consistent with a delamination. By the end of the inspection period, the licensee had determined that the delamination was extensive in Bay 5-6 and was continuing to evaluate the condition of the entire containment structure.

Yet a third section failed the following July. Since that time, the fate of the plant has seriously been in question because of the known complexities of properly repairing the reactor building that, at this site, has the steel vapor barrier directly attached to the interior of the prestressed concrete building wall. Finally, a study performed by Duke late last year showed that while repair was technically feasible, the risk of further complications and delays coupled with money already spent meant that retirement of the plant was preferable.

Duke Energy has chosen to place the facility in SAFSTOR or "safe storage," a defueled and monitored condition in which it will reside for up to 60 years. At that time, activated materials will have decayed very considerably, so that decommissioning and removal of the entire facility will entail far less radioactive material to be removed.

In some quarters, the choice by Duke to not immediately demolish the plant has been taken as hope that the plant might later be refueled and restarted (it is worth noting that the steam generator replacement was completed, and previous owner Progress Energy had completed numerous modifications to the plant in anticipation of a major 15.5-percent EPU (or 'Extended Power Uprate') on top of a previous 2008 1.6-percent MUR (or 'Measurement Uncertainty Recapture'). The fact remains that the containment problems are the "fly in the ointment," and nothing so far released has hinted that Duke thinks this to be a viable option.

FANC, the Belgian nuclear regulator, has announced through a series of press releases and publicly available reports that it sees no reason why defects in the Doel Unit 3 and Tihange Unit 2 reactor vessels, recently found through use of a new type of inspection, should preclude starting up the plants. The defects, originally thought to be stress-related cracks, are actually caused by hydrogen diffusion in the metal of the reactor vessel, and according to all sources involved (FANC, the plant owner Electrabel, and their consultants) have likely been present since the vessels were manufactured. FANC has not given Electrabel the green light yet to restart the plants, since there are a few further tests it would like performed, but has approved Electrabel's plan to complete those tests and we may expect restart of both plants in the next several months.

When the news of these findings first broke, the Belgian regulatory body's general director, Willy De Roovere, stated quite publicly that many reactors worldwide could be affected, having vessels manufactured by the same company that made the vessels at the two affected Belgian plants. For a short time this seemed troubling; however, all other operators worldwide are now confident-as is Electrabel, and now apparently FANC-that the vessels remain sound. (Click here to see an article on ANS Nuclear Cafe at the time this story first broke.) It would appear that the final chapter in this story is about to be completed, assuming Electrabel passes the final few extra requirements placed on it.

A Final Environmental Impact Statement for construction of a GE-Hitachi ESBWR at DTE Electric's Fermi Nuclear Station was issued this week. This is an important step in obtaining a Combined Operating License for the plant from the NRC, although issuing such licenses remains on hold until the Waste Confidence issue is resolved. The NRC staff continues to work on the matter (and all others), issuing a press release stating that work on the FSER (or Final Safety Evaluation Report) is ongoing. 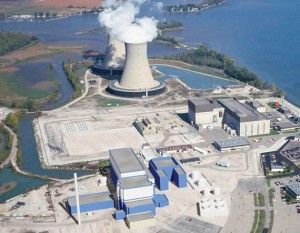 The illustration at right (courtesy DTE Electric) shows the new Fermi Unit 3 with blue trim computer rendered as it will appear when built. Toward the upper right of the photo can be seen Fermi Unit 2, which is a GE BWR/4 rated presently 3430 MWt/1122 MWe. The new GE-Hitachi ESBWR, which includes advanced passive cooling features to protect the core in station blackout conditions and a host of other improvements, is rated 4500 MWt/1250 MWe. GE-Hitachi applied to the NRC for design certification for the ESBWR in 2005.

If one looks closely at the photo (click to enlarge it), one can see that Fermi Unit 2 has a large expanse of open concrete next to it, and a longer-than-required turbine building. This is because originally the plant was intended to house two BWR/4 reactors side by side. Changing economic conditions coupled with lower than predicted electricity demand led Detroit Edison to cancel the original Fermi-3. (Fermi-2 was ordered in August 1968; Fermi-3 was finally officially ordered in January 1972 but was cancelled in 1975.) Of course, Fermi-1 was the experimental sodium-cooled fast breeder reactor built on this site that has long been shut down; it is out of the photo on the lower right along the lake shore.

Detroit Edison, now officially DTE Electric, applied to the NRC to obtain a COL for this plant in 2008. All further review/licensing item dates pertaining to the COL are unspecified as of now; the NRC awaits further response on requests for information on the COL, and the design has not yet been certified (as noted above) by the NRC for construction in the United States.

Belgian Doel-3 and Tihange-2 Back in the News

The years-long saga surrounding the reactor pressure vessels at the Doel-3 nuclear power plant and Tihange-2 NPP in Belgium has taken another turn, pushing these units back into the broader...

Owners of the (556 MW) Kewaunee nuclear plant in Wisconsin recently announced that they will be closing the plant, because it was losing money and they were unable to find another company...

Findings could be significant for other reactors...