SMR designs once again a focus at ANS Winter Meeting 2012

Small Modular Reactors, or SMRs, have been under consideration in many quarters of late as a new focus for nuclear power generation. While the recent deadline for Department of Energy grant money came and went without so much as a whisper from the DOE, the concept continues to be developed. Quite a few presentations have been made, as a result, on reactors of this class here at the ANS 2012 Winter Meeting. 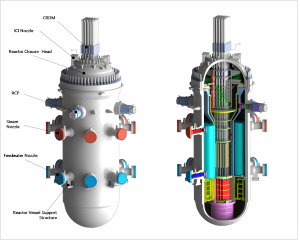 The true definition of what a SMR really is combines the International Atomic Energy Agency definition of "small reactor" (a reactor plant whose net electrical output is less than 300 MWe) and advanced, modularized construction intended to either reduce cost, or enhance some parameter(s) of safety or performance, or both. Most SMR designs feature component parts that are shop fabricated and shipped to the final operating site by truck or barge, and which don't require huge heavy lift cranes as do large commercial nuclear plants. For a lot more documentation on SMR plants, see this DOE page from the SMR Subcommittee.

I attended today's afternoon sessions on SMR plants, sponsored by the American Nuclear Society's Operations & Power Division. We were presented two interesting dissertations on Mitsubishi's MHR-50is/MHR-100is (the "is" stands for "inherent safety") gas-cooled, graphite-moderated small reactor designs:  First, a presentation on general features of the MHR-50is, which is a 120-MWt/50-MWe helium-cooled reactor, and second an interesting analysis of the core stresses applied to this type of reactor during an earthquake.

These paired presentations were followed by another pair concerning General Atomics and its EM2 design. We learned about a complicated but highly clever method to simulate plant response for the EM2 reactor, and then were given a thorough dissertation by Timothy Bertch of General Atomics on how the EM2 can overcome the economic factors that tend normally to work against smaller output reactors.

Two unrelated sessions wrapped up-a group effort paper attempting to discern if in-core parameters can be inferred easily and reliably by such things as main coolant pump load current, and then a very detailed presentation by Sung Yeop Joung of the Korea Advanced Institute of Science and Technology on the design attempt to add an IPSS (integrated passive safety system) to the SMART SMR plant design. The SMART was actually type approved by the Korean government earlier this year, and the SMART is being advertised as the first SMR that has been licensed and can be built.

The day was very interesting, and the continued effort toward SMR plants made apparent at this Winter Meeting seems to provide assurance that SMRs will be a part of the future of nuclear energy.

A Montana citizens group has failed in its effort to repeal H.B. 273, a recently enacted law that transfers the power to authorize the construction of nuclear power facilities in the state...

In its latest financial nod of encouragement to the U.S. nuclear industry, the Department of Energy has announced awards totaling $8.5 million to five industry-led projects, with the aim of...

Surrounded by members of his cabinet, congressional leaders, and others, President Biden yesterday afternoon signed into law the $1.2 trillion Infrastructure Investment and Jobs...

Exelon, owner and operator of the nation’s largest nuclear reactor fleet, has made clear its position on the massive infrastructure and social spending bills that federal lawmakers, at this...