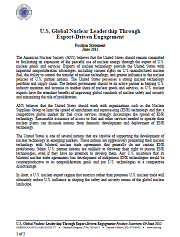 It's logical that ANS would want U.S. nuclear technology to dominate the global market; but the position statement does not come from a market-driven angle-it is noted as a non-proliferation measure. This may seem paradoxical at first, but I ask the audience: Would you rather the U.S. nuclear energy industry influence the world's developing countries as they inevitably build their nuclear infrastructure? Or would you prefer the influence of the nuclear energy industry of another country, which might not enforce and teach the same level of rigor in operational excellence, human performance, and design for non-proliferation?

ANS is now taking the stance that nuclear energy is not only a valuable source of domestic stability, but also an international security imperative. As developing countries begin taking advantage of nuclear energy as a clean energy source (this is already well underway and accelerating), the United States will be looked toward for its technology leadership in nuclear energy.

For bilateral nuclear trade agreements (known as 1-2-3 Agreements), it is imperative that the 1-2-3s be negotiated in a way that assures safety, but does not necessarily demand that a sovereign nation give up its sovereignty (such as automatically requiring that a country never "enrich" uranium to the very low levels required for use as nuclear fuel). The origination of the ANS position statement was a U.S. House of Representatives bill proposed to essentially enact a "gold standard" in 1-2-3 agreements, after the United Arab Emirates had agreed to forego its right to enrich uranium as an anti-proliferation measure. Since we know that these types of requirements are not being placed on agreements among other countries, such a requirement would place the United States in an uncompetitive stance, left to watch from the sidelines as the international nuclear trade landscape develops. Logically, ANS would like to see American technology leading the way to a cleaner and safer energized world.

U.S. nuclear technology is designed with anti-proliferation in mind as part of global security policy, so the exportation of U.S. nuclear energy technology as a market leader serves as a security imperative, to ensure that peaceful and nonproliferative technology is used dominantly throughout the world. I ask again: Would you rather see a developing country install U.S. technology under the guidance and influence of the United States? Or, would you rather see a developing country buy from someone else?

This is actually an area where Position Statement 83 may bring a little discomfort to the people in the nonproliferation community. It contains an undertone of influence, rather than control, over the expansion of nuclear science and technology in the international community. When I was a very young boy, my parents were able to control me; indeed, it was their responsibility to control me as I was raised. But something weird happened as I grew up into my teen years: I gained a sense of sovereignty. I could think for myself, act for myself, and I was pretty sure I knew more than them anyway, as most teenagers do. I wasn't completely grown up yet, but the game had changed. My parents could no longer expect the ability to control me, but needed to still influence me to grow into a productive member of society (Craig Piercy, the Washington, D.C. representative for ANS, tells of this paradigm shift with pictures of his children as they grew up-it's personally compelling and relatable).

In a global society where the United States out-spends everyone else on national defense (and shall we say, international defense), there yet comes a time when even the immense capability of the U.S. Armed Forces cannot effectively control the global community-but the positive example of the U.S. nuclear energy industry, its exemplary safety record, and its operational excellence can serve as a beacon of influence as it exports its technology.

This is why the United States must be the market leader in the exportation of peaceful nuclear technology. But I'm not done.

One of the (some might say, naïve) dreams that I had roughly a decade ago as I was working on my undergraduate degree was the dream that I could forge a career selling and building nuclear power plants in developing nations-as part of a larger global effort to bring people out of poverty. "U.S. Global Nuclear Leadership Through Export-Driven Engagement" could help that dream come alive.

World Bank research indicates that besides the opening of new markets and increasing global wealth creation, security is the other imperative to reduce world poverty, and vice-versa. A "rich" person has a lot more to lose if they go to war or otherwise commit acts of violence. What has a poor person to lose by taking such large risks? In a world where only about 1/6th of the population lives on more than $5 of purchasing power per day, the opportunities are endless for improving global security hand-in-hand with global economic activity. Peaceful nuclear science and technology applications can be a significant piece of the puzzle-with the United States leading the way through a high level of engagement in exports.

Disclosure: I have a deep personal interest in the topic of exporting nuclear technology, which influenced my choice of employment at the finest nuclear technology company on the planet; however, all opinions contained above are my own opinions, and do not necessarily represent the opinions, positions, or strategies of Westinghouse Electric Company LLC or any of its subsidiaries or parent companies, or the Commonwealth of Pennsylvania. 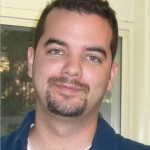 Art Wharton is a principal project engineer at Westinghouse Electric Company LLC in Nuclear Power Plants Business & Project Development. He is a member of the ANS Planning Committee, ANS Public Policy Committee, the ANS Operations and Power Division Program Committee, is the Treasurer of the ANS Operations and Power Division, is the Pittsburgh ANS Local Section Past Chair, a Trustee on the Board of Pittsburgh's Urban Pathways Charter School, and is a guest contributor to the ANS Nuclear Cafe.