VSNAP is the Vermont State Nuclear Advisory Panel. This state panel gives advice to the state government on nuclear issues. The most recent meeting was in Montpelier, Vermont, on July 9.

In my opinion, VSNAP has not accepted the fact that the US Nuclear Regulatory Commission (NRC) is in charge of nuclear safety. In other words, while a Federal judge already ruled in Entergy v. Vermont that nuclear safety is in the purview of the NRC but not the state -- the state still doesn't "get it." 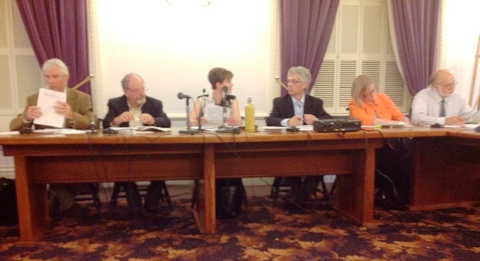 Bill Irwin (designee of the Agency of Human Services); Larry Becker (designee of the Agency of Natural Resources); Elizabeth Miller (Chair and Commissioner of PSD); Leslie Kanat (public member appointed by Governor Shumlin); Rep Sarah Edwards (Representative, chosen by the Speaker of the House); Jim Matteau (public member, appointed by Governor Shumlin). Not pictured, Sen. Mark McDonald (Senator, chosen by the Committee on Committees) (thanks to Sarah Hofmann of the Department of Public Service)

I had been to VSNAP meetings in the days before Governor Shumlin was elected, but I had missed some meetings that took place more recently. I wondered how the panel's deliberations had changed. Since the last time I attended the panel:

* A Governor (Governor Shumlin) opposed to Vermont Yankee was elected, and he appointed a new Department of Public Service Commissioner, Liz Miller

* Vermont Yankee received its license extension from the NRC

In the Old Days

Naturally, in those days, the panel talked about nuclear safety.

Those were the exciting old days. The new Commissioner, Liz Miller, has been appointed by the anti- Vermont Yankee governor, Peter Shumlin. She is basically on the same side of the nuclear fence as the legislative panelists. The meetings have calmed down. Microphone-wrestling is over.

In another change, this meeting was held in Montpelier, not Brattleboro or Vernon. (Brattleboro and Vernon are near the southern boundary of Vermont. The plant is in Vernon.) Liz Miller wants people throughout the state to have access to VSNAP meetings. I think this is a good idea. The same people always formerly came to the meetings. Many of the regular attendees came from nearby Massachusetts.

However, this Montpelier meeting had few attendees, and only three members of the public spoke during the public comment section. I think that if the former Commissioner had tried to move the VSNAP meeting away from the Brattleboro area, the proposed move might have been seen as a trick to make it difficult for plant opponents to attend the meetings. However, Miller was able to move the meeting and include people from different parts of Vermont.

Miller has also made the VSNAP website available to the public (a good thing!). You can hear audio files of the entire meeting here. Other VSNAP documents are available at the site.

VSNAP is an "advisory" panel. It doesn't vote on anything, its job is to advise the state government (agencies and elected officials) on issues relating to nuclear power. It can talk about anything, since it is advisory only.

As far as I can tell, VSNAP advises the state government on safety, safety and safety. The panel had asked Entergy for a briefing on Fukushima upgrades required by the NRC. The Entergy presentation was the main business of the meeting. After Entergy's presentation, it was almost as if the Judge's ruling hadn't happened.

The panel members asked about safety issues internal to the plant. Representative Sarah Edwards was concerned with the Mark I containment. Senator Mark MacDonald claimed that the NRC doesn't enforce its own standards. He stated that the NRC will "change the graduation requirements, and everybody graduates." Panel members suggested Entergy should move rapidly toward taking the fuel out of the fuel pool and putting it in dry casks (for increased safety, of course). Miller was concerned with the steam dryer and whether the plant was working effectively to coordinate with first responders in an emergency situation. The diesel generators, the hardened vents, diesel fuel storage. All were up for discussion.

One particular exchange showed the mood of the meeting. The Entergy presenter said "The Fukushima accident" as part of his presentation. Senator MacDonald interrupted him. "Was Fukushima an accident?" At that point, Miller asked MacDonald to hold his questions until the end of the presentation, but then she added: "Point well taken."

The state panel, being advisory, can legitimately discuss anything. However, the question does arise: after they have held these meetings about safety, whom are they planning to advise? The legislature is in the middle of a court case about federal pre-emption,. The Attorney General (AG) denies that the legislature ever voted on "safety." The AG claims that Entergy's lawyers convinced the judge that the legislature was involved in nuclear safety assessments, but nothing could have been further from their minds.  Really?

To me, despite the new venue, the civility, and the new Commissioner, this panel was basically the same as all the previous panels. VSNAP is exactly where it was before the Federal court ruling: quizzing Entergy about safety and safety equipment. People on the panel also make it very clear that they don't expect the NRC to adequately protect the public.

The state legislature cannot concern itself with nuclear safety, but the state can be an intervenor with the NRC. Maybe that is the point of the VSNAP meetings: helping the AG get ready for the next NRC intervention. Though one would expect such a panel to have a broader reach.

Many people inside and outside of the nuclear industry discuss safety. Everyone wants to be sure that safety changes prevent any recurrence of the events of Fukushima. People should talk about safety.

However, is nuclear safety the proper concern of a state advisory panel? I don't think so. I think it is bizarre that elected state officials are quizzing Entergy about safety, and discussing the "inadequacies" of the NRC. To me, it's like a time warp. It's as if the court case never happened.

The fundamental issue remains the same. The Vermont legislature and its advisory bodies still seem to think that they, not the NRC, are in charge of nuclear safety.

A more complete description of the meeting is at Vermont Digger.