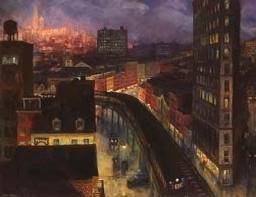 John Sloan "The City" an example of American Realism painting

This is the first of a series of brief "Hall Talk" blog posts on people and events at the ANS Chicago conference taking place this week. The Plenary session kicked off with an introduction by John Rowe, former chairman of Exelon (nyse:exc).

The firm operates 22 nuclear reactors in the U.S. In 2012 it completed the acquisition of Constellation which added several units to its fleet. So readers may wonder why Rowe is not bullish on the future of nuclear energy in the U.S. and why he thinks the "nuclear renaissance" is a decade or two away.

Rowe actually started out on a conventional note reminding the audience that 2012 is the 70th anniversary year of the first sustained nuclear reaction at the University of Chicago field house. Assembled under the direction of Enrico Fermi, the Chicago Pile-1 (CP-1) was the world's first man-made nuclear reactor. It  was built under the abandoned west stands of the original Alonzo Stagg Field stadium at the University of Chicago. The first self-sustaining nuclear chain reaction was initiated on December 2, 1942.

However, Rowe then switched gears talking about the need for the nuclear industry to face with unflinching realism the fact that cheap natural gas will be a very significant competitive factor in the U.S. and western Europe for at least this decade, if not longer. Add to that, Rowe said, the fact that "Fukushima was an accident that was not supposed to happen," and you have a very challenging future facing the people in the audience.

How can the nuclear industry succeed, given these circumstances? Rowe says that passive safety features are a must, along with ease of construction and effective cost control.

Rowe has been frequently cited as a critic of his own industry. He was widely quoted last Fall as saying it is "inconceivable" that a third reactor would be built at Calvert Cliffs, given current economic and market conditions, but in this sense he is misunderstood. He's just calling the shots as he sees them.  If Rowe had been a painter instead of a businessman, his work might have drawn on the influence of the school of American realism. 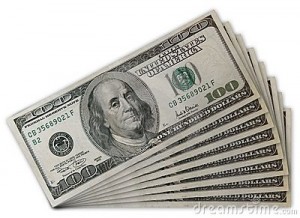 Rep. Mike Simpson (R-Idaho), now in his seventh term representing the district that is home to the Idaho National Laboratory, told the ANS Plenary Session that his view is the public backlash from the Fukushima accident is less than he expected. That's good news, but like Rowe, Simpson sees challenges ahead.

He says the Department of Energy lacks a clear vision of what decision framework it will use to develop policies on the generation and use of power. Without clear priorities, Congress struggles with the question of what to fund in terms of nuclear R&D and why.

On Yucca Mountain, Simpson said the Blue Ribbon Commission has pointed out that we still need a geologic repository and has called for "interim storage." The question is, Simpson asks, "how long is 'interim'"?

Moving on to more general issues, Simpson said the annual federal deficit is so large that you could "eliminate most of the government as we know it" and still have a deficit from interest alone.

"We are talking about spending 24% of GDP and taking in the equivalent of 14% of GDP. This is not sustainable."

Using a visual metaphor, Simpson said that if the deficit was composed of $100 bills, the stack of them would be 690 miles high or about three times the low earth orbit attained by the Space Shuttle.