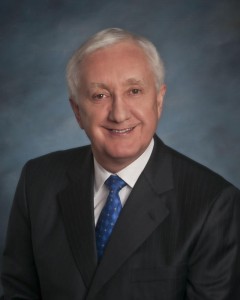 The award, which is given jointly by ANS and the Nuclear Energy Institute (NEI), recognizes Klein's outstanding contributions to the nuclear energy field in the United States and around the world over the past 25 years. Klein, who has been a lifelong educator with the University of Texas, also served as an assistant secretary of Defense. He holds a Ph.D. in nuclear engineering from the University of Missouri.

In making the award, ANS President Joe Colvin said, "I am very honored to present this award to a distinguished member of our community, who is also a long -time friend of mine; Dale represents everything I admire about our colleagues: he's committed to the future of nuclear energy, which he has demonstrated by his dedication and public service."

"Nominees for this award exemplify the highest level of commitment to policy and statesmanlike conduct," noted Colvin. He added, "We are fortunate to have such an extraordinary individual as a member and co-chair of ANS's Special Committee on Fukushima, whose charter is to provide a clear and concise explanation of the events surrounding the accident to the general public and U.S. leaders. We're confident that Dale's experience and wisdom will be invaluable to the work of the Special Committee."

In his remarks accepting the award at the plenary session of the ANS national meeting, Klein said that he grew up on a farm in Missouri and that it was a long way from those humble beginnings to standing on the podium of the ANS meeting. Then Klein said that he was mindful of the comments of a prior recipient of the award, the NRC's Ed McGaffigan, Jr., who received the same award in 2007 shortly before his untimely death.

Perhaps in a reference to the troubles afflicting the current NRC chairman, Klein said, Ed McGaffigan was noted for respectfully yet forcefully reminding NRC commissioners not to make decisions that could be perceived as political in nature.

"McGaffigan said at his award ceremony that he stood on the shoulders of giants like Smyth, whom the award is named after and I feel the same way," Klein said.

ANS Nuclear Cafe talked with Klein on the occasion of his award and asked him about some of the highlights of his long career.

The first question is why does the NRC get involved in international nuclear issues, given its primary mandate to regulate the U.S. reactor fleet?

Klein said that the NRC staff and the other commissioners understand that nuclear energy is a global enterprise. A nation's nuclear agency responsible for the safety of its reactors cannot work in a vacuum. The NRC works closely with the OECD Multi-National Design Evaluation Program (MDEP).

The MDEP program incorporates a broad range of activities including:

Klein says that it is important to remember that ultimately, the responsibility for the safety of a nuclear reactor rests with the plant operator. He doesn't think a prescriptive international regulatory body, perhaps housed at the IAEA, would be a good idea.

As a practical matter, though Klein didn't say so directly, this kind of international cooperation, which the NRC promotes, works to prevent developers of new and untried nuclear technologies from shopping around for the most promising venue.

What he does say is that boundaries matter. He thinks nations should cooperate especially where reactors are near each others' borders. For instance, rivers divide international boundaries and reactors are often located on major waterways in Europe. For this reason, it makes sense for the nuclear regulatory agencies in both countries to be talking to each other.

Another area where Klein and the NRC saw value in engagement in international venues is with the International Nuclear Regulatory Association (INRA). The main purpose of the association is to influence and enhance nuclear safety, from the regulatory prospective, among its members and worldwide.

It was established in January 1997 and comprises the most senior officials of the nuclear regulatory authorities of the following countries: Canada, France, Germany, Japan, Spain, Sweden, the United Kingdom, and the United States of America.

The big question on everyone's mind is what does Klein think of the evolving circumstances at Fukushima?

Klein's observation is that the accident at Fukushima demonstrates that nuclear events are seen by the public differently than coal or natural gas. It's a reminder that whatever happens at one nuclear power station has worldwide impacts.

Some of the issues that have to be dealt with coming out of Fukushima include:

One of Klein's observations is that we are early in the process of determining what is a lesson learned from Fukushima.

"We have too much data and not enough information," Klein said.

However, he added that there are some changes already taking place in Japan that make sense.

"I support Japan's plan to move the Nuclear Industrial Safety Agency out from under the Trade Ministry to independent status. I support seeing its technical capability to carry out an independent oversight role as an important contribution to Japan's future use of nuclear energy," Klein said.

That said, the NRC dispatched its most senior nuclear engineers to Spain while Klein was chairman, including the agency's executive director who was fluent in Spanish. Klein says that this technical assistance made a difference in the quality of one utility's efforts to present a strong case for relicensing.

Klein then offered some thoughts on the global nuclear energy renaissance by talking about the situation in several countries.

China: The NRC provided technical support to that country's nuclear regulatory agency. However, the political environment has unknowns that are difficult to understand from an American perspective.

United Arab Emirates: Klein is the chair the UAE Nuclear Safety Review Board. Bill Travers, who used to hold a high level position at the NRC, leads the nuclear regulatory effort in the UAE. The country's regulatory framework, with independence from the agency developing four new reactors, is seen as a model for other countries.

India: It turns out that Klein was one of the first senior U.S. officials to travel to India after the signing of the 1-2-3 agreement that allows the country to acquire nuclear fuel for their civilian reactors. Klein notes that India has a well-established nuclear regulatory program that is technically competent.

Germany: Right now, Klein says, there is a lot of emotion coming out in response to the Fukushima crisis. It is not a good time to be making policy decisions. Germany and Switzerland have done exactly that, having made "emotional votes" on nuclear energy.

"These decisions to end their nuclear energy programs are unsustainable. The outcomes will not support meeting climate change objectives. Solar and wind will not support baseload demand," Klein said.

"I see the Italian vote as a protest against the excesses of the Berlusconi regime and not directed specifically at nuclear energy. Yet, in 1987 when Italy first shut down their nuclear reactors, their energy minister told me it cost the country $50 billion in additional energy costs, something they could ill afford," he said.

Meanwhile, getting back to Germany, Klein says that they will wind up importing energy to meet baseload demand. That will include gas from Russia and nuclear energy from France and the Czech Republic. When CEZ ramps up the Temelin project ib the Czech Republic, it could result in as many as five new reactors.

Russia: The Russians are pursuing exports of their VVER reactor design with deals in Turkey, India, China, and Vietnam.

Some of Klein's remarks reported here were also made later in the day at an ANS  special President's Session on Fukushima. Klein's role and work as co-chair on the ANS Fukushima Commission will be reported in-depth by ANS Nuclear News.

Who was Henry DeWolf Smyth?

Henry DeWolf Smyth (1898-1986) was an American physicist and diplomat who had several key roles in the early development of nuclear energy. He was a commissioner of the U.S. Atomic Energy Commission (1949-1954) and was the U.S. representative to the International Atomic Energy Agency (IAEA) from 1961-1970. He was chairman of the Department of Physics at Princeton University from 1935-1949. His academic advisor for his Ph.D. was Ernest Rutherford.

The Nuclear Regulatory Commission announced today the selection of Brooke Poole Clark as the new secretary to the Commission, effective spring 2022. Clark will replace Annette Vietti-Cook, who...

At the end of 2021, Nuclear News is taking a look back at some of the feature articles published each month in the magazine. This article is from our February issue that focused on policy....

The Thursday morning executive session at last week’s 2021 ANS Winter Meeting and Technology Expo brought together a group of influential nuclear-policy experts from the United States and...