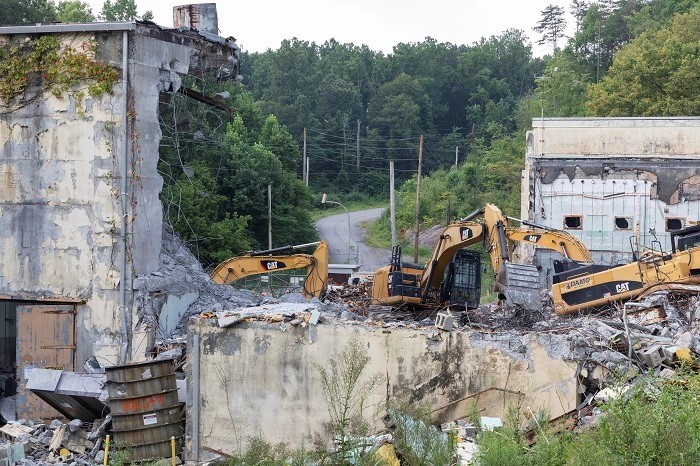 With the building down, work has begun to remove waste and debris, which is expected to fill an estimated 525 truckloads for disposal in the coming weeks. The work will clear the land for reuse at the DOE’s National Nuclear Security Administration Y-12 Complex.

“Removal of this facility is another sign of our steady progress transforming DOE’s Oak Ridge Reservation,” said Laura Wilkerson, acting manager of the DOE’s Oak Ridge Office of Environmental Management.

History: More than 50 percent of the facilities throughout the Oak Ridge Site, which includes Y-12, are more than 40 years old. The Criticality Experiment Lab was one of them.

Built in 1949, the two-story, 24,000-square-foot lab was used to conduct experiments with fissile uranium isotopes for nuclear reactor designs. Employees performed more than 9,700 experiments there in its first decade, and the facility later supported the Oak Ridge National Laboratory’s High Flux Isotope Reactor program. The building has been closed since 1992.

Workers spent significant time deactivating the facility leading up to its teardown. They removed nearly 1,500 linear feet of asbestos-insulated piping, 300 linear feet of process piping, and 8,500 square feet of other asbestos-containing material.