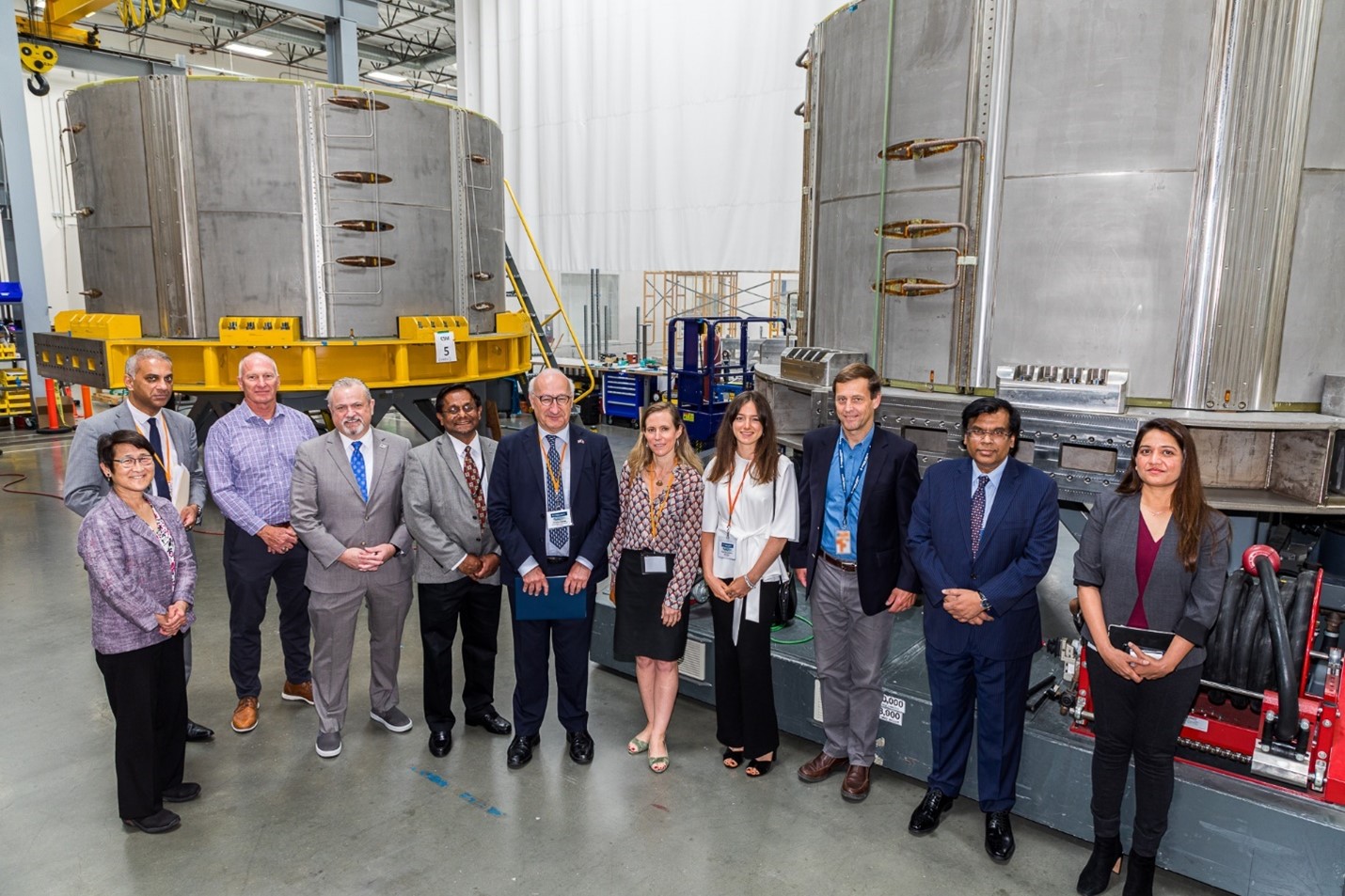 From California . . .: “It was a great privilege to host Ambassador Étienne at General Atomics to showcase the full range of our capabilities in the defense, energy, and technology sectors,” Lall said.

The Magnet Technologies Center is where GA is fabricating all the central solenoid modules for ITER, the world’s largest tokamak, now under construction in southern France by 35 partner countries. When fully assembled from six modules, the central solenoid will be 59 feet tall, 14 feet in diameter, and weigh 1,000 tons. It will drive 15 million amperes of electrical current to shape and control the fusion reaction.

The central solenoid is one of 12 hardware systems that the United States is providing for ITER with funding from the Department of Energy’s Office of Fusion Energy Sciences and under the direction of the US ITER Project, which is managed by Oak Ridge National Laboratory. The United States is contributing about nine percent of ITER’s total construction costs.

“I was deeply honored to welcome Ambassador Étienne to the Magnetic Technologies Center at General Atomics to see our fabrication process firsthand,” said Anantha Krishnan, senior vice president of the GA Energy Group. “General Atomics is fabricating the most powerful pulsed superconducting electromagnet ever built, for ITER, and we are proud to play this integral part in the quest for fusion energy. Having recently returned from visiting the ITER facility in France, I was pleased to show Ambassador Étienne how General Atomics is playing a key role in the success of this ambitious project.”

“ITER is the largest scientific experiment in human history, with the top talent from across the world working together to ensure its success. It truly is an honor to be part of this effort,” added John Smith, senior director of engineering and projects and program manager for central solenoid module fabrication.

. . . to France: It takes two years to complete a single module using a range of specialized manufacturing capabilities, and two of the seven central solenoid modules have already arrived at the ITER facility in France. The additional modules, including one that will act as a spare, are at various stages of fabrication. The central solenoid will be assembled as the modules arrive on site in support of the assembly of the device in preparation for first plasma, according to GA.

GA prepared the first module to leave San Diego one year ago, in June 2021. It was shipped to Houston and then to Marseilles, France, before traveling by road to Cadarache, France. ITER produced a video of the last leg of the first module’s journey in September of last year.