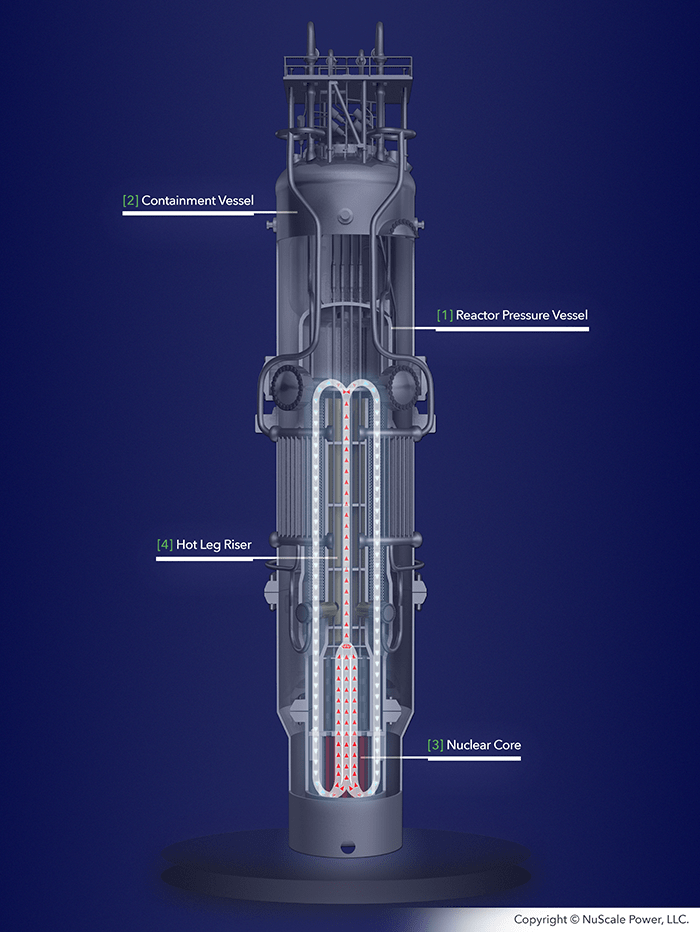 While light on vowels, VOYGR is big on flexibility. NuScale’s flagship plant, the VOYGR-12, can accommodate up to 12 77-MWe NuScale Power Modules for a total capacity of 924 MWe. NuScale is also offering the four-module VOYGR-4 (308 MWe) and the six-module VOYGR-6 (462 MWe). VOYGR can provide energy for electrical generation, district heating, desalination, hydrogen production, and other process heat applications, according to NuScale.

Approaching commercialization: In August 2020, NuScale’s modular design became the first SMR to receive design approval from the Nuclear Regulatory Commission. In its announcement, NuScale said that the first VOYGR plant—the Utah Associated Municipal Power Systems Carbon Free Power Project, likely a six-module plant to be constructed on a site at Idaho National Laboratory—will be operational by the end of the decade. NuScale is exploring other domestic and international deployment opportunities, including in Washington state, Bulgaria, South Africa, and Ukraine.

“We are dedicated to changing the power that changes the world, and the name VOYGR represents our groundbreaking plant technology that is setting a new standard for clean, reliable, and safe power,” said John Hopkins, chairman and chief executive officer of NuScale Power.

To that end, NuScale said, it is working on “supply chain development, standard plant design finalization, planning of plant delivery activities, as well as startup and commissioning plans.”

X-energy and Dow announced today a collaboration with intent to deploy an advanced small modular reactor at one of Dow’s U.S. Gulf Coast facilities. The SMR, which would be operable by about...

The Nuclear Regulatory Commission has directed its staff to issue a final rule certifying NuScale Power’s small modular reactor design for use in the United States, the agency announced last...