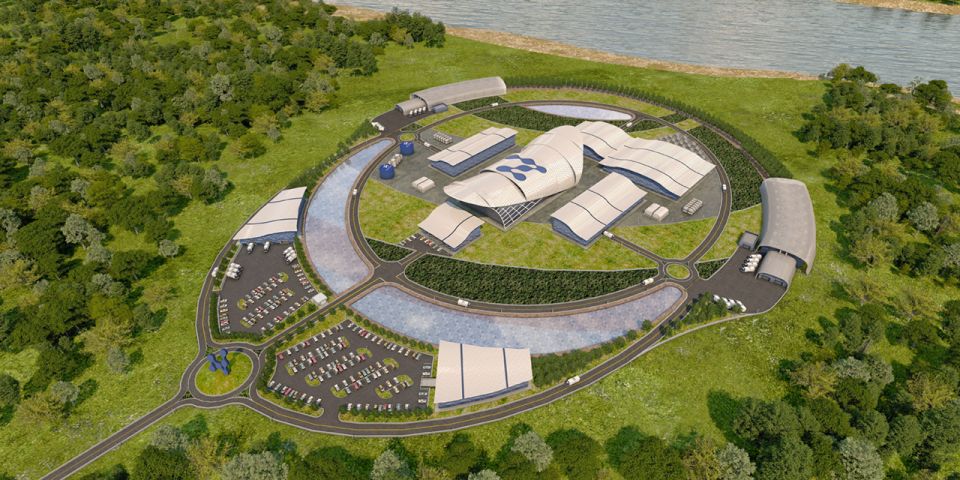 An artist’s rendering of the NuScale plant. (Image: NuScale)

For more than two decades, the American Nuclear Society’s Standards Committee has recognized the benefit of incorporating risk-informed and performance-based (RIPB) methodology into ANS standards to improve their effectiveness, efficiency, and transparency. In general, standards using RIPB methods with properly identified and structured objectives need less modification and can be expected to remain valid for much longer periods.

Formation of the RISC

In 1999, the ANS Standards Board, a standing committee of the Society, formed the ANS Risk Informed Standards Committee (RISC) in response to industry’s need for RIPB methods in voluntary consensus standards. Thus, the RISC became the fourth ANS standards consensus committee, whose defined scope was to develop standards that establish risk criteria and methods for probabilistic risk analysis, risk assessment, and risk management for nuclear facilities.

“The industry recognized that risk-informed applications could not be implemented efficiently without consistency in the requirements for probabilistic risk assessments (PRAs), and so, ANS responded with the formation of the RISC,” said Paul Amico, the RISC’s first chair. The RISC’s first ­developed standard, ANS-58.21-2003, External Events in PRA Methodology, was approved in early 2003. The objectives of this standard were to set forth the requirements for external-event PRAs to support risk-informed decision-making for commercial nuclear power plants and to prescribe the method(s) for applying these requirements to specific applications. This was followed by the issuance of ANS-58.23-2007, Fire PRA Methodology, which was used to directly support industry initiatives for RIPB fire protection.

Shortly after the RISC was formed, the ANS Standards Committee began exploring whether existing standards would benefit from the use of RIPB methods or a graded approach to specifying requirements in nuclear technology. Donald Spellman, chair of the ANS Nuclear Facilities Standards Committee (NFSC) and one of the four ANS standards consensus committees at the time, called a special meeting in 2004 with the goal of achieving consensus as to whether approved NFSC standards could be adapted, or new standards should be initiated, to incorporate RIPB methods. An individual integral to this discussion was a well-known expert in industry performance-based regulations, Sheldon Trubatch. Committee members reviewed Trubatch’s “Process for Converting Prescriptive Requirements into Performance-Based Regulations” to get a better understanding of how to modify existing standards to incorporate RIPB principles. Spellman said, “The meeting concluded with the decision to launch a pilot to incorporate RIPB insights into a new standard in development.” The pilot was successful, resulting in the approval of ANSI/ANS-2.26-2004 (R2017), Categorization of Nuclear Facility Structures, Systems, and Components for Seismic Design. This standard provides criteria and guidance for selecting seismic design categories and limit states for the SSCs in a nuclear facility, other than commercial power reactors, whose seismic design requirements are established by other standards and regulations.

The seismic design categories and limit states are to be used in conjunction with the standards shown at left that apply RIPB insights or a graded approach.

In 2011, the RISC merged with an American Society of Mechanical Engineers committee chartered with the same objectives, and together they now operate as the ANS/ASME Joint Committee on Nuclear Risk Management (JCNRM). As a result, ANS-58.21, the RISC’s first standard, was revised and incorporated into the joint standard ANSI/ASME/ANS RA-S-2008 (R2019), Standard for Level 1/Large Early Release Frequency Probabilistic Risk Assessment for Nuclear Power Plant Applications, with addenda issued in 2008 and 2013. A further revision is expected to be approved and issued later this year.

The box at right indicates some of the additional standards and projects currently in development by the JCNRM and associated with probabilistic risk analysis, risk assessment, and risk management for nuclear facilities.

With the recognition of growing interest in RIPB methods, in 2011, the JCNRM created the Subcommittee on Risk Application (SCoRA) as one of its three subcommittees. SCoRA’s charter was and still is to interface with ANS and ASME committees and committees of other nuclear standards development organizations, as requested, that include or plan to include risk assessment and risk management in the development and updating of standards. The objective is to strive for consistency in other nuclear-related standards with risk management principles in general and to work toward consistency with the JCNRM’s PRA standards. Part of this interface activity includes an education function, for which SCoRA will avail itself of resources that exist among the broader JCNRM membership.

Standards currently in development by the JCNRM

The Risk-Informed and Performance-Based Principles Policy Committee (RP3C) was commissioned in 2012 as a special committee of the ANS Standards Board responsible for the identification and oversight of approaches, priorities, responsibilities, and schedules for the implementation of RIPB principles into ANS standards. The RP3C interfaces with and provides training to the ANS standards consensus committees, subcommittees, and working groups related to RIPB principles, which ensures consistency across ANS standards on the implementation of these principles.

The need for the RP3C was identified by an ad hoc committee formed to facilitate a reorganization of the Standards Committee’s consensus committees. Steven Stamm, who headed up this committee, said, “Our discussions led us to recognize the need for a new high-level committee to establish overall guidance to incorporate risk and performance principles into ANS standards, and the Standards Board agreed.”

The RP3C was initially tasked with establishing a plan to provide approaches and procedures to be used by ANS consensus committees to consistently implement RIPB principles into ANS standards. Over the years, the components of this plan have been broadened to be based on the ANS Standards Committee Strategic Plan, which is aligned with the Society’s Strategic Plan and incorporates a guidance document to help standards writers. After issuance, the guidance document will need periodic updates as lessons are learned.

What followed was a review by the RP3C of all ANS standards and projects, leading to the creation of a list of 23 ANS standards that were deemed most likely to benefit from incorporating RIPB methods. Of this group of standards, nearly half have already been revised or are currently in development.

In 2019, the RP3C issued a guidance document, Incorporating Risk-Informed and Performance-Based Approaches/Attributes in ANS Standards, for interim trial use. The guidance document identifies roles and responsibilities and the process for using RIPB approaches, as appropriate. This guidance document is intended to be used by all eight ANS standards consensus committees during the development of new standards and revisions to existing standards. A training module was also developed to accompany this guidance document. A revision incorporating comments and lessons learned is expected to be released later this year. Once it is completed, the RP3C will build on the guidance by creating a more comprehensive training package that will include presentations to train current ANS working groups on the application of RIPB principles in ANS standards. The RP3C then intends to present its progress and accomplishments to other industry organizations through industry forums.

To further support the private and public sectors, the RP3C launched a RIPB community of practice (CoP) in February 2020. CoPs are groups of people who share knowledge and experience around specific topics, best practices, or professional lessons learned. The purpose of this CoP is to support rapid knowledge sharing on the development and application of RIPB principles and practices within the nuclear industry. CoP presentations have been made by several of the advanced reactor developers, including NuScale and Oklo. Other presentations have focused on voluntary consensus standards or topics such as “RIPB in ALARA.” The RP3C’s CoP events are open to anyone interested. Presentations and recordings are available on the RP3C’s webpage.

Standards using RIPB principles that have been issued to date

It is known that RIPB methods are not necessarily applicable in the same way to all standards developed by the ANS Standards Committee. Some standards may need to remain deterministic for practical reasons. Others, such as standards developed by the Nuclear Criticality Safety Consensus Committee (NCSCC) and its series of ANS-8 nuclear criticality safety standards, present special challenges for RIPB concepts and will likely maintain long-standing practice. The NCSCC is responsible for maintaining 18 current standards for the control of criticality risks associated with processing fissionable materials outside reactors.

Thirteen standards using RIPB principles or graded approaches to varying degrees have been issued, and another 15 standards are currently in development. Standards issued with RIPB principles are listed in the box on the previous page.

“While much progress has been made in developing RIPB standards,” said RP3C chair N. Prasad Kadambi, “much work remains to take full advantage of the benefits of the RIPB approach.” Kadambi encourages anyone interested in joining this effort to become an active member of the RP3C.

In addition, a Part 53 licensing approach is being developed under the “Rulemaking Plan on ‘Risk-Informed, Technology-Inclusive Regulatory Framework for Advanced Reactors,’” as required by the Nuclear Energy Innovation and Modernization Act, signed in January 2019. Use of either the LMP or Part 53 licensing approach for an advanced reactor will require the development and use of a PRA that meets the applicable requirements of JCNRM standards, such as ANSI/ASME/ANS RA-S-1.4-2021, Probabilistic Risk Assessment Standard for Advanced Non-LWR Nuclear Power Plants, for a non-LWR applying the LMP.

“PRA has moved from an analysis that confirms acceptable risk levels for the existing nuclear plants to analysis that is central to the design and licensing of advanced plants,” said Dennis Henneke, the current ANS JCNRM chair. “This is key to ensuring that very low-risk nuclear plants can be built quickly and for a much lower cost.”

Standards Board chair Donald Eggett recognizes the nuclear industry’s need for standards incorporating RIPB methods, especially in the advanced reactor community. “One of my top priorities as Standards Board chair is to listen and to act accordingly in support of the entire community and its needs,” Eggett said. “Without question, RIPB methodology, along with its benefits and approaches, is just one of them.”

Anyone with questions or interest in getting involved with the ANS Standards Committee is encouraged to contact standards@ans.org.