Bob Mumgaard, chief executive officer of CFS, said in a September 8 conference call with reporters that the development is “the key to unlocking a net energy fusion at a commercially relevant scale on a very fast timeline, and this could put the unlimited fusion energy that we've all hoped for into the mix for energy in the nearer term. We have the physics, the site, the supply chain, the team, and [now we have this] key technology in place to make that a reality.”

What makes it news? “If you go back three years ago when we started this particular endeavor, we said that our goal was by 2025 to build a machine, a fusion machine, that would be the first to make more energy out than it took to heat the plasma. That's a big Kitty Hawk moment,” Mumgaard said. “In order to get to that time in 2025, we first needed to invent an entirely new type of magnet that could go to a much higher magnetic field. We said, ‘Give us three years to do that.’ We're now at the three-year mark, and we've done that.”

The large-bore HTS magnet was designed to the scale of SPARC, a demo plant now under construction in Devens, Mass., that is about half the size of a planned commercially viable fusion power plant, called ARC. CFS is aiming for a commercial system in the early 2030s, “maybe even 2030,” Mumgaard said. “This is the fastest path to commercialization of affordable fusion energy across the globe.”

“This was designed to be commercial. This was not designed to be a science experiment,” said Maria Zuber, a professor of geophysics and vice president for research at MIT. “It uses decades of fundamental research in tokamaks. . . . The whole idea here was to require as little new physics as possible in order to speed up the development.

“I now am genuinely optimistic that SPARC can achieve net positive energy, based on the demonstrated performance of the magnets,” Zuber said. “The next step is to scale up, to build an actual power plant. There are still many challenges ahead, not the least of which is developing a design that allows for reliable, sustained operation.” 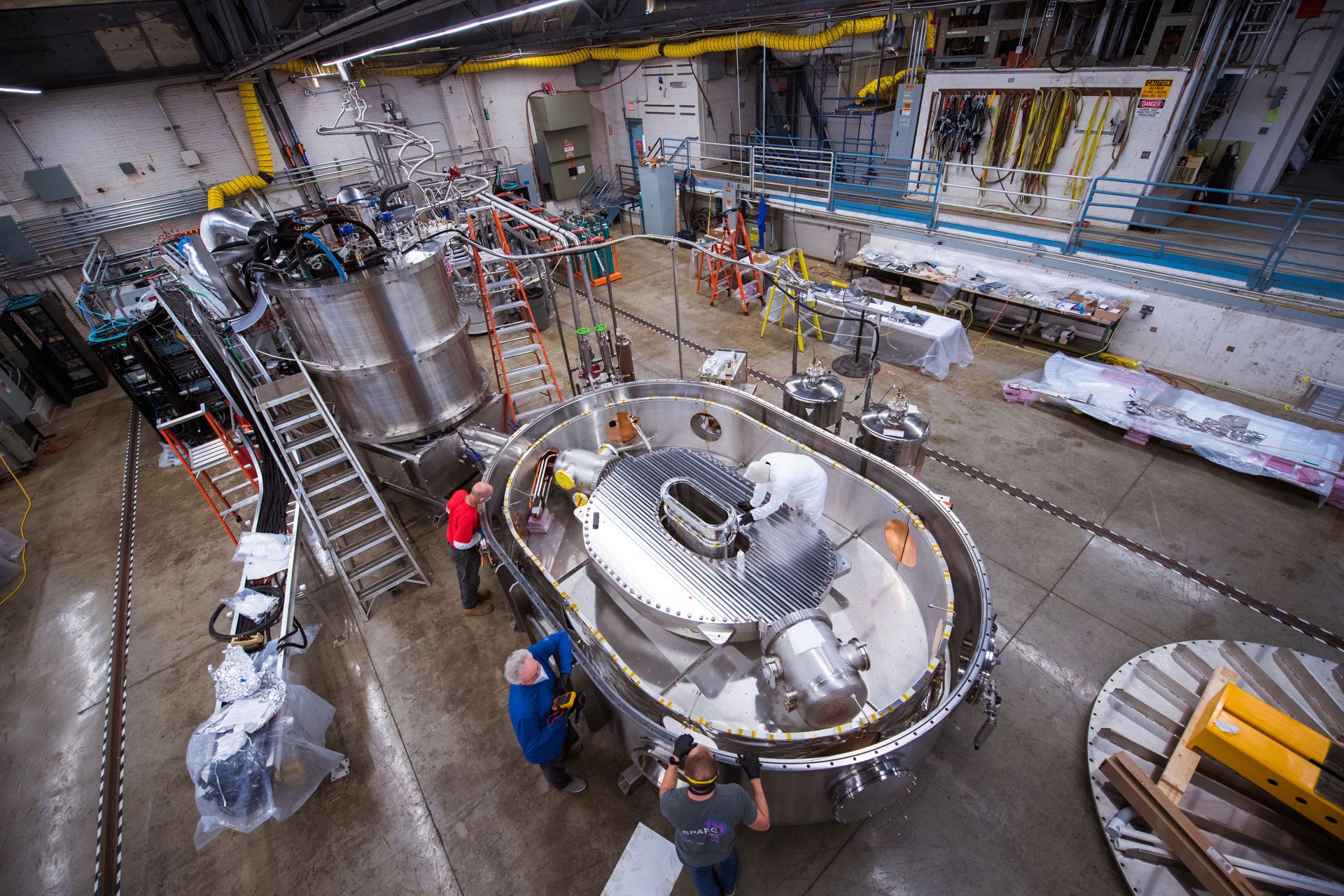 Scientific basis: The idea arose from a nuclear engineering class taught by MIT professor Dennis Whyte, director of the Plasma Science and Fusion Center and a cofounder of CFS. The idea was deemed promising and was developed over the next few iterations of the class, leading to the ARC power plant design concept in early 2015.

Whyte explained that the recent achievement proved concepts that were outlined in a series of scientific papers published last year on the physical basis of the new fusion device. “This is peer-reviewed science, but the technology was not available until Sunday,” he said. “To put it into context, the scale and performance of this magnet is similar to a non-superconducting magnet that was used in MIT experiments five years ago. The difference in terms of energy consumption is rather stunning: That magnet, because it was a normal copper conducting magnet, consumed approximately 200 million watts of energy. To produce the confining magnetic field, this magnet was around 30 watts.” That decrease—a factor of around 10 million—"makes it obvious why going to a high-field superconducting device or magnet now brings into bear net energy from fusion,” Whyte said.

Building something new: The magnet contains about 270 kilometers of superconducting tape wrapped in a spiraling pattern in 16 separate layers that are stacked together and sealed within a metal case, as shown in this animation. The 16 layers, which Mumgaard calls pancakes, are manufactured separately, in an assembly line fashion. The finished magnet weighs about 10 tons and is 10 feet tall and about half as wide.

The team worked with two possible magnet designs in parallel, both of which ended up meeting design requirements, said Joy Dunn, head of operations at CFS. “It really came down to which one would revolutionize the way that we make superconducting magnets, and which one was easier to build.” Rather than simply a swapping out low-temperature superconducting material for HTS and using the same cable configuration, the new design took advantage of the inherent flexibility of ribbon-like HTS tape. The work required new manufacturing and testing capabilities and coordination with multiple suppliers of superconducting tape to produce material that met the needed specifications.

Time and temp: The HTS magnet successfully tested at MIT is made from a material called REBCO, which stands for three constituent materials: rare earth, barium, and copper oxide. Its optimal operating temperature is a frigid 20 K, but relative to low-temperature superconductors, which require temperatures of a few degrees above absolute zero, HTS magnets require significantly less energy for cryogenic control.

Principal investigator Zach Hartwig, an assistant professor in the MIT Department of Nuclear Science and Engineering, explained that it took about a week to cool the magnet to super-conducting temperature and another few days to ramp the magnetic field up to full performance. The magnet was held in steady state for about five hours before the researchers ramped down the power.

“We're talking about equilibrium of the electric currents that we inject into the magnet and equilibrium of the temperatures and so on,” Hartwig said. “The timescale of just a few hours even is sufficient data to lock in the knowledge that the magnet is in steady state. It's performing exactly as we thought it would, and that's sufficient to demonstrate the metrics.”

HTS magnets enable significantly stronger magnetic fields in a smaller space than more conventional magnet technologies, such as the low-temperature superconducting magnets currently being installed at the ITER project in France. CFS is designing magnets that are 40 times smaller than the ITER magnets, with twice the magnetic field.

Challenges ahead: Going to proof of concept to net energy will mean overcoming challenges identified in a National Academies report published in February 2021, titled Bringing Fusion to the U.S. Grid. Many of those challenges, such as plasma confinement, heat extraction, ensuring sustained structural integrity of the power plant components, and closing the fuel cycle, are challenges common to all fusion developers. By focusing on magnetic field strength to improve plasma confinement, CFS may have minimized the impact of those challenges on the timeline for SPARC and ARC, Mumgaard said.

“Because we've been able to go to a very high magnetic field, we've actually relieved a lot of the constraints that pushed all those other aspects up against some really tough technical challenges,” Mumgaard said. “We really pushed hard on the magnet side so that we could get some relief on these other types of issues.”

As we begin a new year, it is natural not only to look back (see page 24 for top news stories of 2021) but also to look forward. Nuclear News reached out to leaders in the nuclear community...

Fusion and the bounty of electricity

At the end of 2021, Nuclear News is taking a look back at some of the feature articles published each month in the magazine. The first article is from our January issue that focused on the...

A major shift in fusion research and development is underway in the United States after recent national reports confirmed resounding support in the fusion community for building a pilot power...

As a spacecraft on a research mission hurtles at up to 100,000 miles per hour toward the surface of a gas giant like Jupiter, the atmospheric gases surrounding the spacecraft turn to plasma,...

ANS is hosting a virtual Graduate School Fair on Friday, November 19, from 3:30 p.m. to 6:30 p.m. (EST). The goal of the event is to help prepare the next generation of nuclear professionals...