Yesterday, we had one of the nicer yet stranger events during this wholly strange time - that is, the meeting of the American Nuclear Society's Book Publishing Committee, of which yours truly is the Vice Chair.  I say "nicer" because I always look forward to these meetings, given the opportunity they afford to interact with some of ANS' finest people and the fact that these meetings really get things done.  I say "stranger" because it was a Zoom meeting and not face to face, around a table.  What's even more impacting for me is the fact that the BPC meeting usually is the first event I attend at ANS' Annual and Winter meetings and it serves, thus, as the best possible kickoff for me.  November, maybe.  Maybe.

During the meeting many interesting discussions took place, including the fact that time-honored nuclear engineering texts are frequently the ANS top sellers, year after year.  We discussed another kind of book at another point and a question was asked if that kind of book had ever been done before.  My answer was "yes, in about 1975" ... but later in the meeting the two sorts of subjects merged for me and I wrote myself a note saying "what was oldest nuclear textbook take a look" (sic.) 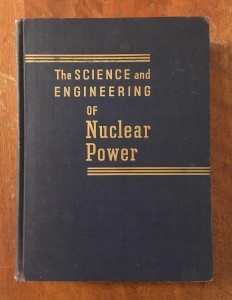 I cannot swear solidly to the fact but for now the book you see here is my candidate.  This book was titled "The Science and Engineering of Nuclear Power," and was published in 1947.  Of the hundreds of books here on the subject it's the oldest.

First off, the book is actually a collection of carefully curated materials resulting from a string of seminars presented at MIT starting in October 1946.  So, the book has not one author but rather authors of each section or chapter - and some of the names are familiar.  For example, Chapter 4, "Nuclear Chain Reactions," was written by E. P. Wigner, a major figure in early nuclear research.  The phenomenon of stored energy release from graphite (q.v. Windscale) is named after Wigner, for example.  An appendix is provided by Hans Bethe.

Unsurprisingly given the early date the book's preface makes some definite qualifications and hedges.  For starters, the book was written at a time when the vast majority of atomic energy knowledge was sealed inside the government, and the US Atomic Energy Commission reviewed this volume so as not to reveal any classified information.  Because of this screening the preface's author, Clark Goodman (see here for a short bio*) makes it plain that there are known gaps of information in various places in the book.  Goodman also states that there are discrepancies in some terminology between authors and sections which, today, would just not do in a text.  There would be reviewer notes and changes requested.  But not in these early days when it was felt that time was of the essence and that the ideas would get across more or less clearly.

The extreme earliness of this volume is most appreciated by a look through its pages, although the preface's words late in the first paragraph make it plain that we are seeing the light just after dawn:

"The objective is to present the fundamentals of chain-reacting systems in terms that are understandable to the non-specialist, particularly to engineers interested in the industrial applications of nuclear energy.  Progress in this field requires the coordinated effort of many branches of science and engineering, particularly during the next several years.  Gradually, the responsibility will devolve to a new breed of specialists, already dubbed nuclear engineers.  It is anticipated that collaborative publications of this type will assist materially in these developments."

So, at the time late in 1947 when Goodman wrote these words Nuclear Engineering did not yet exist as an established degree field; it was literally being invented by people from all sorts of other theoretical and engineering pursuits.  And these people from all these pursuits had all sorts of different ideas, some of which can be seen in the book and which we can immediately today see as only a theoretical model of, for example, a future power reactor even if today we know it couldn't possibly work.  In 1947 there was very little "couldn't possibly" and a whole lot of "what if we?" 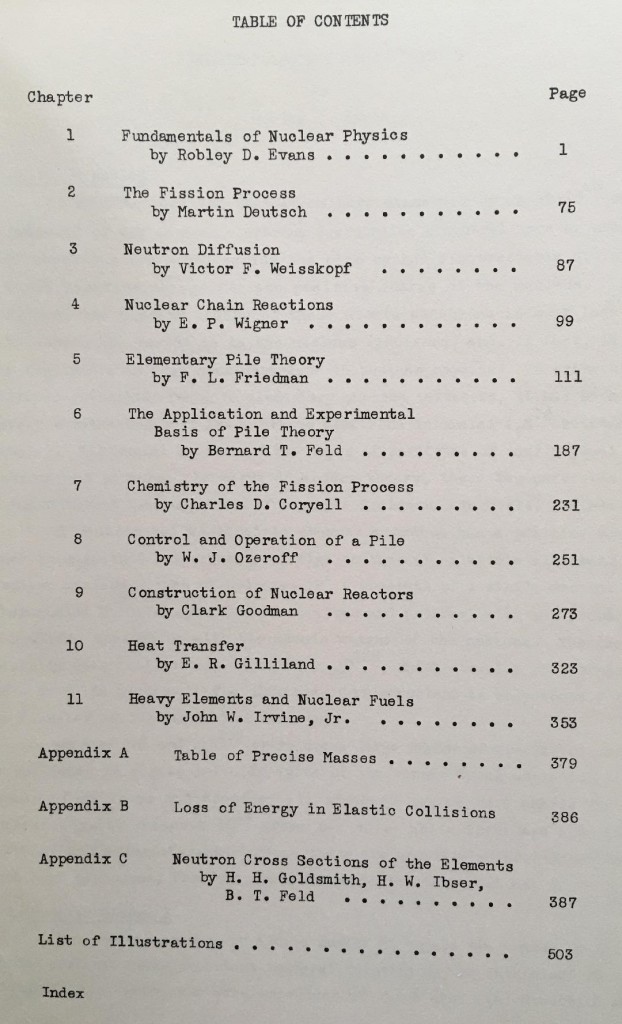 Many gems exist in the book - including a diagram of that earliest-discussed but never-built "Oak Ridge Power Reactor," a heteregeneous fuel, gas-cooled design intended to use, paraphrasing, "as conventional of a steam plant as is possible" mated to a gas to water/steam heat transfer system (we'd say "steam generators" today.)  That proposal was never built, although years later another project was launched to build a gas cooled reactor at Oak Ridge (Allis-Chalmers was reactor vendor) but that project stalled and was cancelled with the plant essentially almost complete but never fueled.  Still, this early Oak Ridge idea is found mentioned in quite a number of the early volumes on nuclear power, and it's safe to say that in those early years the Oak Ridge project was widely known as the first project that didn't make it.

(Item:  It was this 1946-47 Oak Ridge gas cooled concept that Allis-Chalmers was contracted to follow by the Navy, in case the technology could be adapted to propulsion of ships.  The early cancellation of this project by Oak Ridge ended the chance of gas cooled reactors on ships and Allis-Chalmers never got back into Navy nuclear power as a reactor vendor.)

So there we have it.  There are so many interesting things in the book that I would encourage professors to try to track down a copy for their shelves.  (You do see other copies once in a while, and there's a second volume out there that I don't have.)  Certainly there's no chance the ANS Book Publishing Committee would agree to reprint the book simply for historical value.. but you know, in the spirit of "what if we?".. I'll make another note just in case.

*The linked biography does support my assertion that the volume now under discussion holds the title for being the first published, non-classified (i.e. outside the AEC and War Dept.) text on nuclear energy and engineering.

Will Davis has been a member of the Board of Directors for the N/S Savannah Association, Inc. He has been a contributing author for Fuel Cycle Week, and wrote his own popular blog Atomic Power Review. Davis serves as Vice Chair of ANS' Book Publishing Committee. He is a former U.S. Navy reactor operator and served on SSBN-641, USS Simon Bolivar. He doesn't really expect the book to be reprinted, but still...