In a news briefing in Tokyo earlier this week, Japan's Minister of the Environment, Yoshiaki Harada, told reporters that Tokyo Electric Power Company (TEPCO) will have to dump radioactive water from its crippled Fukushima nuclear power plants into the Pacific Ocean. 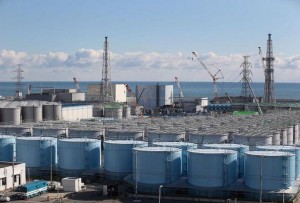 Tanks of water at Fukushima that have been scrubbed of all radioactive materials except mildly radioactive tritium, and which can be slowly released to the ocean with no environmental harm. GETTY IMAGES

He went so far as to say it is "the only option". Which is actually true.

They just don't have any room left to store it. And storing it is the wrong strategy anyway. TEPCO has collected more than 250 million gallons of contaminated water from the cooling pipes used to keep fuel cores from melting since the plant was destroyed by the Tohoku earthquake and tsunami in 2011.

The funny thing is that putting this water in the ocean is actually the best way to handle it. And that's because it's contaminated mainly with tritium, the least radioactive, and least harmful, of all radioactive elements. All of the other radioactive elements have been removed from the water by chemical treatment and the amount of other elements in the water is relatively small and wouldn't pose a hazard.

The Japanese government awaits a report from an expert panel before making a final decision, and quickly pointed out that Harada's opinion was his alone and did not indicate a policy decision. TEPCO will abide by whatever the government decides.

Critics, like Greenpeace, weighed with the usual every-atom-is-dangerous and this water should be stored and treated forever. They don't seem to understand the radiation or chemistry for tritium.

Those of us who do understand have suggested slowly releasing the tritium-contaminated water into the Pacific Ocean over about a ten-year period. The water is stored on-site in almost a thousand large tanks.

Although not intuitive, this is a very good idea. Tritium is the mildly radioactive isotope of hydrogen that has two neutrons and one proton, with radioactivity so low that no environmental or human problems have ever come from it, even though it is a common radioactive element in the environment. Tritium is formed naturally by atmospheric processes as well as in nuclear weapons testing and in nuclear power plants.

Let's say that again - no harm has ever come to humans or the environment from tritium, no matter what the concentration or the dose.

Tritium is just assumed to be carcinogenic to humans at extremely high levels, although that claim is only hypothetical since adverse health effects from tritium have never appeared in humans or in the environment. Only laboratory studies on mice at extremely high levels have shown any adverse health effects and even they were not fatal, even after ingesting 37,000,000 Bq/liter.

Putting this water into the ocean is without doubt the best way to get rid of it. Concentrating it and containerizing it actually causes more of a potential hazard to people and the environment. And is very very expensive with no apparent benefit.

Unfortunately, the idea of releasing radioactivity of any sort makes most people cringe. But that's the problem, only the perception of tritium is bad, not the reality. And in our new world of anti-science, such a wrong idea might rule over what is the right thing to do, wasting precious resources and time.

The scientific reality is tritium emits an incredibly weak beta particle that is easily stopped by our dead skin layer. It only goes a quarter inch in air. Even ingestion of tritium doesn't do anything. We've tried.

The health risks of tritium-contaminated water are so low that all the countries of the world have no idea what regulatory limits to put on it.

Using Becquerel per liter as the concentration unit (a Bq is a disintegration of a single nucleus per second), the United States has set 740 Bq/L for drinking water, but Canada has 7,000 Bq/L as its limit. Switzerland set 10,000 Bq/L, and Australia a whopping 76,103 Bq/L.

But these limits were just taken out of thin air. They are not health-based. They were chosen because they were easy to achieve. Meaning none of these levels, or a hundred times these levels, are harmful.

Why is this the case?

Hydrogen is a really small atom and easily gets through microscopic pores, even biological membranes and cell walls. Tritium, which is still hydrogen chemically) can be found in water molecules, which are two hydrogen atoms and one oxygen atom. 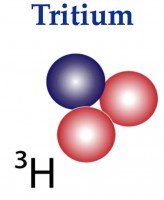 Tritium has two neutrons and one proton. The two neutrons make the nucleus unstable and it gives off an extremely weak beta particle to become helium-3, two protons and one neutron. Hydrogen has only a proton but its chemistry and that of tritium are the same. HPS

Because tritium is three times heavier than normal hydrogen because of two neutrons in its nucleus, tritium tends to replace normal hydrogen in water molecules, rapidly diluting any tritium in our bodies and in the environment. Tritium likes to be in water, not in tissue.

Our bodies are mostly hydrogen, and that is mostly in water. So while tritium's radioactive half-life is 12.3 years, its biological half-life in our bodies is only 10 days. Therefore, ingestion of this weak emitter doesn't have the same effect as most other ingested radionuclides.

It's also difficult for the extremely low-energy beta from tritium to get through the water, cell walls and other materials in between the radionuclide and any critical molecule like DNA. The energy in the slow-moving beta from tritium mostly gets dispersed within the electron clouds of other molecules through inelastic collisions and the Bremsstrahlung effect. This turns the kinetic energy of the beta emission into electromagnetic non-ionizing energy.

In the end, it is impossible to get a significant radiation dose from tritium, unlike any other radionuclide. It exits the body and is diluted too quickly.

Even more important, there's more tritium in the atmosphere from natural processes and left over from old bomb testing, than ever has been, or will be, released from commercial reactors. Cosmic rays produce four million curies worth of tritium every year (150,000,000,000,000,000 Bq) in the upper atmosphere, much of which rains out into surface waters that we end up drinking.

These amounts of tritium from other sources are millions of times greater than what would be slowly released from these tanks at Fukushima. Since there's been no health or environmental effects from any of these larger sources, it's hard to get excited about dumping such a tiny amount from Fukushima into the ocean.

Besides, there are 16,280,000,000,000,000,000,000 Bq of potassium-40, rubidium-87 and many more radionuclides already in the world's oceans. So the fish are swimming in plenty of natural radioactive material anyway, more than this Fukushima water could ever provide.

The biological half-life of tritium in fish and marine life is even shorter than in humans, less than 2 days, and the dilution in seawater is too rapid for any significant dose to get back to any people because the physical and chemical properties of tritium mean it does not concentrate up the food change - it dilutes up the food chain.

So while Japanese fishermen fear this strategy of release from a public relations perspective, their fish will still test negative with respect to food radiation limits and their packaged fish sold at market would still carry the official 'safe' stickers.

As usual, it all comes down to perception and fear. We as scientists can give you the answers, but you can ignore them if you want, especially since non-scientists make these decisions anyway.

This particular problem with Fukushima is really important because Japan needs to restart most of their reactors that were shut down after the earthquake in 2011. They were not affected by the quake or the tsunami that followed, and wouldn't be by future ones.

Nucear power is critical to addressing global warming, not to mention the Japan's economic doldrums. Japan was once at the forefront in the fight against global warming but their carbon emissions have skyrocketed since the output from their nuclear plants were unnecessarily replaced by fossil fuels.