Radiation and the Value of a Human Life

The 63rd Annual Meeting of the Health Physics Society wrapped up last week in the great city of Cleveland and there was a palpable air of excitement that things might change.

HPS represents the group of scientists most responsible for protecting us from the harms of radiation. They know we have ridiculously-low rad limits that can cause more harm than good, and also unnecessarily cost us hundreds of billions of dollars that could be used to save actual lives.

The venue for this meeting was fitting since Ohio is experiencing some of the national insanity of prematurely closing nuclear plants for no good reason other than unjustified fear of radiation and the intransigence of lawmakers and anti-nuclear groups to value the best low-carbon, safest energy source we have to fight global warming. Even in light of all climate change experts' call for more nuclear, from Jim Hansen on down. 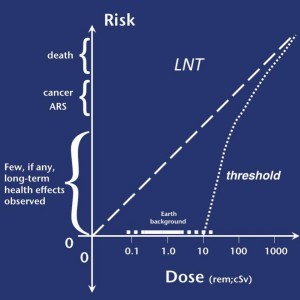 The assumption of LNT: any radiation dose no matter how small will cause harm. However, small doses of radiation, < 10 rem(cSv)/yr, appear to be easily handled by cellular repair mechanisms that evolved as a normal adaptive response with the emergence of the eukaryotic cell 2.3 billion years ago. It would be odd indeed if the upper end of Earth background radiation was not near the threshold for significant radiation-induced biological effects.CONCA

This fear originated around 1959, when the world adopted a singularly foolish hypothesis for the negative biological effects of radiation, called the Linear No-Threshold hypothesis, or LNT and its resultant policy, ALARA (As Low As Reasonably Achievable).

LNT assumes, in contrast to almost all data on living organisms, that any radiation is bad and there is no threshold of radioactivity below which there is no risk, even Earth background radiation levels. Following ALARA means that we should protect everyone from all radiation, making doses as low as we possibly can, even if it costs billions.

Indeed, we do spend billions of dollars each year protecting against what was once background levels. It's right out of a Road Warrior movie. No wonder the fear of radiation took over the worldview. Science fiction is much more fun to study than real science.

The Plenary Session at the HPS meeting was devoted to just these issues. Yours truly started off with a discussion of what these extra unnecessary costs might be. About $500 billion is a good estimate for America, over a trillion dollars for the world.

Dr. Roger Coates, President of the International Radiation Protection Association in London, followed with a discussion of 'Prudence and the Hidden Burden of Conservatism', outlining the strong support for developing a more practical and pragmatic approach to radiation protection.

While prudence is a noble concept that we use in our everyday lives to keep us from harm, the combined impact of accumulated layers of conservatism in deriving radiation limits has resulted in limits that are hundreds of times below the radiation doses that we should worry about, and at a great cost. Always choosing the worst-case scenario isn't conservative, it's just wrong. That's why we developed statistics in the first place.

Dr. Antone Brooks gave the Landauer Lecture, title 'Ya, But What If?' that probed the fear that permeates society with ridiculous radiation scenarios like:

Or, 'Ya, but what if radon is the second leading cause of lung cancer?' No, radon alone is not very effective in producing lung cancer.  Radon combined with cigarette smoke increases lung cancer, but it's the smoking that dominates that risk.  If you have radon in your home just stop smoking and put a fan in the basement. 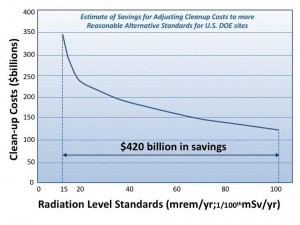 DOE could save billions, and clean-up more sites, if society adopted a more reasonable limit for radiation, still well below background levels, but where no harm has ever been observed. AFTER DOE

Most of the fears and questions surrounding radiation have been answered very well over the years and all studies point to the need to have a reasonable threshold for radiation below which we don't have to worry about health effects. And we don't have to spend billions protecting against a phantom menace.

Unless you, the reader, are in a boat out in the middle of the Pacific Ocean, you're getting a radiation dose between 200 and 1,000 mrem/year (2 to 10 mSv/yr) in the United States, just from background sources such as rock, dirt, potato chips and cosmic rays (EPA Rad Limits) and the radioactive isotopes of uranium, thorium, radon and potassium that are in them.

(Yes, potato chips are the most radioactive food, but if you eat ten bags a day, it's the salt and fat that will kill you, not the radiation!)

Some places in the world have background doses ten times higher than us, but there have never been any observable health effects from these doses. Ever. Anywhere.

On the other hand, regulations require nuclear waste disposal systems and clean-up standards to meet release criteria of less than 4 mrem/yr (0.04 mSv/yr) to downgradient drinking water supplies. Moving from Cleveland to western Colorado will give you an extra 100 mrem/yr (1 mSv/yr). Should we make moving to Colorado against the law? Yes, according to these regulations. No, according to common sense.

There are different types of radiation and different biological effects of each and it doesn't matter whether the radiation is natural or man-made, they're the same. The measure of dose (rem or Sv) takes all that into account. However, we have made our regulations act as if they are different which is totally unscientific.

It is not possible to see statistical evidence of public health risks at exposures less than 10,000 mrem/yr (100 mSv/yr) because any risk is well below the noise level of all other risks faced by humans or the environment. That's why we will never see any deaths, or even excess cancers, from Fukushima radiation, but 1,600 people died in the days following the accident from the frantic forced evacuations that resulted mainly from fear.

It is useful to note that the debate surrounding LNT in the 1950s was all wrapped up in the Cold War and was used by China and the USSR to stop above-ground nuclear bomb tests by America, so I guess that was a good thing. LNT sounded like a nice conservative idea at the time, but little did we know the collateral damage that would follow, such as fear of radiological medical diagnostics and treatments that save millions of lives each year.

The underlying problem with LNT is that life originated on Earth in a much higher radiation background than exists today, long before we split the atom. When the eukaryotic cell emerged over 2 billion years ago (the type of cell that makes up all higher life forms including humans), background radiation was between 1,000 and 20,000 mrem/year (10 and 200 mSv/yr).

In order to survive and thrive, these cells developed very efficient mechanisms for repairing radiation damage at or below these levels. These same mechanisms were essential to life when oxygen first entered the atmosphere about the same time. Free oxygen is thousands of times more deadly than radiation and we have only recently understood the importance of anti-oxidants in molecular biology and in our food for overall health.

Radiation is one of the weakest mutagenic and cytogenic agents on Earth. That's why it takes so much radiation to hurt anyone.

Health physicists get a little frustrated that, on the one hand, they know that there is no real risk from any radiation below background, but are required to keep to limits a hundred times lower. The public often asks, 'if it's so safe, why are you working so hard to keep it so low?'

Good question. And the answer is 'Because we're told to. It's the rules.'

So what are the costs of regulating radiation doses to such absurdly low levels?

A better question might be - How much do we consider the value of a human life to be?

$7 million is the value of a human life according to EPA.

$129,000 is the average historic legal value of a human life in America.

$12,420 is the death benefit to families of deceased soldiers, although circumstances in combat can increase that.

$45 million is the value of a single healthy human body when chopped up and sold on the black market for body parts.

$2.5 billion is the amount we spend to save a single theoretical human life based on LNT, although it is doubtful we have saved any lives at these levels.

$100 is the cost to save a human life by immunizing against measles, diphtheria, and pertussis in subsaharan Africa.

So, we could save 25 million lives in Africa for the cost of saving one theoretical life from low-levels of radioactivity. This is nuts. And it creates an ethical dilemma we have not yet faced up to.

The presence or absence of a threshold dose for radiation is a societal decision that society has been left out of. That needs to change. We have real problems that need to be solved. Yes, we need to deal with radiation doses above, say, 5 rem, 10 rem, whatever level you want to draw as the threshold. But there's always a threshold. No different than, mercury, cadmium, or lead. Everything is in the environment at some level, but the old adage that dose makes the poison is quite true.

Life has easily dealt with radiation levels up to 10 rem/year for over 3 billion years. It's not a problem. 100 rem/year...now that's a problem.  We need a threshold, or we spin ourselves into nonsense.

Note: another scientific meeting on LNT is scheduled for this coming September 30 to October 3 in the Tri-Cities, Washington.

This article originally appeared on Forbes.