Deputy Secretary of Energy Speaks at the ANS Winter Meeting

The keynote speech of this morning's Opening Plenary was delivered to a large crowd by newly-installed Deputy Secretary of Energy Dan Brouillette, who followed ANS President Bob Coward's positive and hopeful, if wary, tone on the platform. 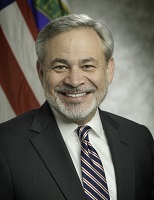 Brouillette began by specifically mentioning the strong role that the American Nuclear Society has had since its inception for professionals in the nuclear field, adding that it's his belief that nuclear science and technology is "one of the greatest stories of our age."  The success, he opined, has come even in the face of determined opposition that has impeded much.  For example, he said, opposition has in some part large or small helped to drive the cost of nuclear plant construction to exorbitant levels, and this same root of opposition now threatens closure of operating (and safe) nuclear plants today.  The shutdown of these plants, says Brouillette, "could in the future pose a serious risk to the reliable functioning of our electric grid."

The benefits of nuclear technology, the Deputy Secretary said, are visible and available to us everywhere - from helping food be safe (with irradiation), allowing space exploration (with power sources such as RTG's), and have potential applications in such areas as oil production, synthetic fuel production and even, perhaps surprisingly, coal production (these last three if new high temperature reactors can be built and employed for process heat.)  Of course, Brouillette hastened to add, the most familiar benefit is electric energy which, according to him, means that there's no more reliable fuel (source) than nuclear fuel given its 18 month refuel cycle.

What matters now, he said, is that for the most part people tend to take electricity (and the grid itself) for granted; "you flip the switch, turn it on and it just works."  According to Brouillette, for this level of take-it-for-granted reliability to continue "you've got to have more than just one fuel source," so that "if one of them underperforms, there's another available to step in."  "The grid is most resilient," he continued, "with an all-of-the-above energy generating strategy."  As one example, he pointed out the great "Polar Vortex" storm during which natural gas was diverted heavily for heating use so that much of the northeast's gas fired electric generation was offline.  Nuclear and coal came to the rescue during that event - largely because their fuel reserve onsite is considerable, already paid for, and waiting (or in the case of nuclear, already installed.)

Just after pointing out that "millions would have suffered very badly" had there not been such sources available during the storm, Brouillette observed that, unfortunately, many nuclear plants are on the verge of being closed for one or another reason, which in total means the US might be facing what he termed an energy disaster, sooner or later.  "This is why the administration today favors an all-of-the-above energy strategy," he said, further adding that "marginalizing one energy source is a serious mistake."  This, he said, was the real basis behind (and essentially the finding of) the grid report that Secretary of Energy Perry called for, and which led to the new rulemaking proposal to FERC to reward base load coal and nuclear for not just reliability but resilience.

As to the variety of generators (and fuels) and the grid reliability and resilience problem, Brouillette observed that this is a problem "that all utility executive already recognize."  He's confident, he says, that FERC will adopt the rule or a form of it that will reward the traditional base load plants to support a truly resilient grid - a comment that surely met the approval of the assembled crowd.

To those who say the new proposed FERC rule is a "thumb on the scale", the Deputy Secretary says "The power markets are all rule-based, and there have been thumbs all over the scale already for many years - it's all thumbs, and has been stacking the deck against coal and nuclear for years."

As he approached the close of his speech Brouillette added that something must be done "to drive down the cost of building nuclear plants - a significant part of which is the war against nuclear."  He is in favor, he said, of encouraging developments of both SMR's and other advanced reactors - not just for electric power but for non-power (i.e., process heat) applications.  He added, perhaps importantly, that he believes that "the private sector cannot do it (develop advanced reactors) alone, by itself, and that DOE's role in this development is critical."

Brouillette's most memorable quote came at the end, as he said that he hoped for a day that nuclear energy "would be revived, not reviled," and that this movement must begin now, in the US, and then spread across the globe.  Enthusiastic applause showed the room's support for Deputy Secretary Brouillette's comments, bringing the keynote to a positive close.