When we cut straight to the point, the statistics are humbling, to say the least: 1 in 8 women, more than 250,000 diagnosed every year, with 40,000 annual deaths. I don't have much room to talk when it comes to breast cancer. I'll probably never experience it (granted a small percentage of men have been diagnosed with it). Like many of us, I've had friends and relatives suffer through the treatments, always under the looming threat of being diagnosed with it again. But I'm still in no way qualified to discuss its nature and, truth is, I don't know much about breast cancer or its diagnosis.

That being said, I can chime in a thing or two about nuclear, and as you may know, nuclear is a huge player in the treatment of early-stage breast cancer. It's certainly not unusual to blast tumors with a potent dose of E = mc2. It's pretty common as a matter of fact. Regarding early-stage breast cancer, the nuclear treatment is generally delivered in two types of packages: external radiotherapy and brachytherapy. Who do we have to thank for these powerful treatments used today? Those brilliant, yet kind of awkward years of early 20th Century nuclear research.

The legends of our field (the Curies, the Lawrence's, the Fermi's) didn't exactly practice what we'd call safe science. Case in point, somewhere around 1900 Pierre and Marie Curie invented "curietherapy," 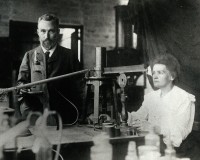 which entailed soaking the pointed end of a feather pen with radium and stabbing it directly into their friend's tumors; extra points if the tumor glowed in the dark from the massive amounts of radiation. This was probably the earliest form of brachytherapy. Ernest Lawrence used to nuke salt water with his accelerators and "volunteer" his graduate students to drink it. Then they'd play hot and cold with a Geiger counter to see how the radioactive sodium coursed through the body (to all the struggling grad students out there, just remember that things could be worse). Also around that time, Lawrence encouraged San Francisco locals to have their tumors irradiated with his 37-inch cyclotron. Sometimes the results were encouraging, other times people just vomited.

Nevertheless, it would be naive to say that we didn't learn anything from these amateur experiments - the era when radium was treated like Tylenol. And while a number of healthy cells were unfortunately destroyed in the good ol' days of nuclear, it also became abundantly clear that nuclear was certainly an enemy of the tumor. We just needed better aim. That's because tumors are generally defined as a runaway growth of abnormal tissue surrounded by healthy tissue. They usually start small - often in the form of the dreaded "lump" that so many are warned to seek out. These are the pertinent early stages of breast cancer detection. Stopping it from growing is crucial.

Concentrated doses of radiation damage the unwanted DNA, which can stop the reproduction of those cancerous cells. The hoped-for result is a shrinking tumor or an organ that's void of the disease. In the later stages, those tumors can spread (referred to as metastatic breast cancer), at which point radiation treatments are less effective and the survival rates start to crash.

First up: external radiotherapy. Full disclosure: I'm cheating just a bit by calling this treatment "nuclear" because it's not entirely accurate to say that accelerator photons originate from the nucleus of an atom. In any case, when one bombards high-energy electrons into a thick slab of dense metal that energy converts into the most misspelled word in all of nuclear academia: Bremsstrahlung.

Out of that accelerator pours a shower of MeV photons to the cancerous cells from only a few feet away. The beam is collimated to improve accuracy, again minimizing the damage to healthy tissue, and the target is usually shot from different angles. Furthermore, because of an effect known as tumor re-oxygenation, researchers found that a series of small doses is more effective than one big dose of photons; not to mention this puts less burden on the innocent healthy tissue. Patients usually take on external radiotherapy five days a week for up to seven weeks and the doses are so high that I'm not even going to report them - in fear that my health physicists might read this.

Then there's brachytherapy. Rather than beaming cancerous cells externally, doctors can implant a radioactive needle or seed into locations around the tumor (or even where the tumor used to live). That piece of metal is loaded with a hot isotope and is, of course, properly contained as to avoid the spread of radiation throughout the body. But at the same time, it's depositing a local dose of gamma radiation to everything within its reach. The isotope is often times Iridium-192 which comes to us by way of isotope reactors. Irradiating a piece of stable iridium in a nuclear reactor for a brief period of time easily turns it into a screaming hot Superhero version of iridium (which is the over-simplified way of saying the thermal neutron absorption cross-section of Ir-191 is 954 barns).

Brachytherapy could also employ cesium, radium, and iodine - there's a handful of isotopes available for this treatment. The upside is that it's almost impossible for the source to miss the tumor. The downside is that there's a radioactive foreign object inside the patient. Fortunately for breast-cancer oriented brachytherapy, the treatment is temporary and the source is removed after the dose. In other cases, if surgically removing them is too much of a burden for the patient, those seeds can become a life-long enemy of airport metal detectors.

As encouraging as these tools sound, I've omitted the most important treatment of early-stage breast cancer, which is surgery: lumpectomies. In the midst of this research and since many of us are nuclear scientists (reading this nuclear blog), I noticed an interesting parallel between radiation therapy and nuclear power. As most of us know, and whether we like it or not, over 70 percent of U.S. electricity comes from fossil fuels. Nuclear comes in at a strong ~20 percent. But there's no shame in second place, especially in the field of early-stage breast cancer. Even though surgery removes the majority of the disease around the breast or lymph nodes, the procedure is far from over because there's still the risk of undetected deposits.

These small residuals of the disease - that surgery can't necessarily remove - are time bombs that can turn into life-threatening recurrences. This is where nuclear comes into play because according to a 2005 review of early-stage breast cancer researchers found that treating patients with radiotherapy after surgery can reduce the risk of local recurrence by approximately 19 percent (or more!) compared to the control groups! In other words, and somewhat like our electricity grid, nuclear finishes the job where the primary attack can't always reach.

But I'll slow my enthusiasm. It's easy for scientists to get excited about isotopes, gammas, and everything in between. The fact is radiation therapy is exhaustive, since treatments are sometimes coupled with chemotherapy. If you ever get the chance to meet a breast cancer survivor and they're willing to share the details, be sure and listen carefully because there's a lot to learn from these heroes. I was once schooled on radiotherapy by a breast cancer survivor, and this was after she had just run a 5k race!

While pink is prominent this month on your ~20 percent nuclear-powered televisions and devices, nuclear also holds a special place in the treatment of early-stage breast cancer: radiation treatment can reduce the number of cancer recurrences by approximately 20 percent (or more!). Radiation therapy is crucial for eliminating residual cancerous cells and recurrences. While you're at it (although I can't recommend bringing this up at a tailgate) think of the early scientists whose crazy experiments actually set the foundation for the radiation treatments hospitals still use today. More importantly, think of the real heroes brave enough to take on these treatments with more dose than I'll ever receive in a lifetime of nuclear research.

Alex Brown earned a B.S. in chemical engineering, an M.S. in radiation physics, and a Ph.D. in radiochemistry. He is a member of the ANS Biology and Medicine Division, as well as the Fuel Cycle and Waste Management Division. He is a member of the Young Members Group. He lives in Chicago. You can follow him on Twitter.