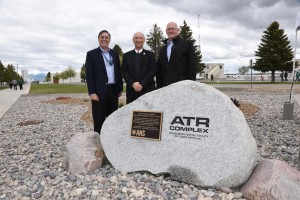 The American Nuclear Society recently recognized the Idaho National Laboratory's Advanced Test Reactor (ATR) Complex as a Nuclear Historic Landmark at the 2016 ANS Winter meeting in Las Vegas.  On May 18, ANS President Andy Klein presented the award during a visit to ATR.

The designation recognizes not only the contributions of the ATR, but also its predecessor reactors: the Materials Testing Reactor (MTR), Engineering Test Reactor (ETR), Engineering Test Reactor Critical, Advanced Test Reactor Critical, and Advanced Reactivity Measurements Facility I and II, as well as the hot cells, Radiation Measurements Laboratory and other research capabilities that have resided at ATR Complex throughout the years.

MTR began the legacy of materials testing at the ATR Complex when it achieved criticality, or in more simple terms began operating, in March 1952. It was a 30-megawatt (Mw) reactor that, after operating experience, was increased to operate at up to 40 Mw, with irradiation positions outside of the core. These positions allowed scientists to expose experiments to both neutron and gamma radiation at an accelerated rate. It began testing fuels and structural materials for other reactors, but was limited by the ability to only expose one side of an experiment to the nuclear environment. Changes were made and experiments were safely inserted into the core of MTR for a better irradiation environment. MTR also has the distinction of being the first light-water reactor to operate using plutonium fuel.

The Engineering Test Reactor, rated at 175 Mw, achieved criticality in September 1957. Learning from experiences at MTR, ETR was built with regular, in-core experiment positions and was able to more efficiently and quickly irradiate experiments for customers. In the latter stages of ETR's life, it had a sodium-cooled loop passing through the core to support liquid-metal-cooled reactor designs.

The ATR took over a bulk of the materials testing being done at the ATR Complex when it achieved full-power operations in 1969 after initial criticality in July 1967. ATR is capable of 250 Mw operations. Building on what was learned in MTR and ETR, ATR made use of a revolutionary core design in which the fuel was arranged in a "serpentine" fashion. The new design allowed five in-core experiment positions surrounded by fuel and four out-of-core positions with fuel around half of the experiment area. A number of other test positions throughout the beryllium reflector exist for experiments of varying sizes and needs. In total, 77 test locations are available in ATR.

Other improvements made when ATR was designed and constructed include nine pressurized water loops passing through the core; these positions provide a physical environment to match power plant temperature, pressure and chemistry while ATR accelerates the nuclear conditions. As missions have changed over the years, three of the pressurized water loops have been removed, and six are now available. ETR had similar capabilities, but not nearly to the extent built into ATR. The designers also understood the need to replace structural material in their own test reactor, and ATR has undergone regular Core Internal Changeouts (CICs). There have been five CICs so far, with the next being planned for early 2020. ATR has the capability to operate regions of the reactor at different power levels, meeting the specific needs of different customers all at the same time.

MTR operated until April 1970, and ETR until December 1981. During a short period, all three reactors were irradiating fuels and materials for a number of customers. Since 1981, ATR has been utilized as the irradiation choice for Naval Nuclear Propulsion, commercial and test reactor designers, next-generation nuclear designers and other countries. In 2007, it was designated a National Scientific User Facility, since renamed the Nuclear Science User Facilities, attracting university and industry experiments from across the nation.

On Thursday, June 29, an anniversary celebration will be held at ATR Complex to mark 50 years of safe operations. ATR is currently completing a number of replacements and upgrades throughout the plant in anticipation of many more years of irradiation service to nuclear researchers from around the U.S. and the world.