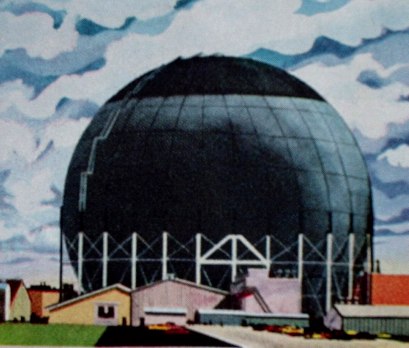 The now-obscure and thick "Atoms for Peace Manual" published in 1955 by the U.S. Government Printing Office (and presented by Senator Alexander Wiley) contains, near its end, a curious and also now-obscure event in atomic energy history:  The first commercial sale of atomic-generated electricity.  And thereby hangs a tale.

The power plant involved was the Submarine Intermediate Reactor or SIR plant, contained in a 225 foot diameter sphere at the Kesselring Site, in upstate New York.  This plant was the prototype for that installed in the submarine USS SEAWOLF (SSN-575) and was a sodium-cooled, intermediate-neutron reactor whose promise initially when conceived in the years after the end of the war looked better than the water-cooled design. 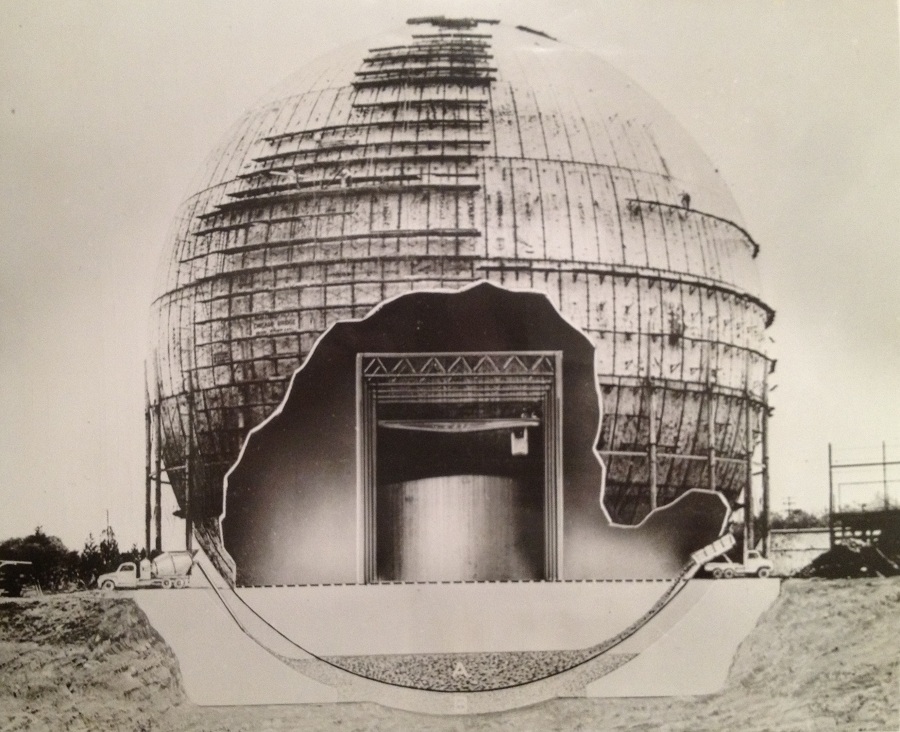 Inside the SIR sphere was a submarine type hull and a large water tank to shield it. Illustration from press release in Will Davis library.

But before all of these events played out, the SIR plant was scheduled to take its own place in atomic history as it was arranged that the plant could also generate power to be distributed outside itself (about 10 MWe, only). It was decided that a ceremony would be held to mark the first commercial sale of this power onto the grid - which occurred on July 18, 1955.

Senator Clinton P. Anderson remarked that the advent of such plants as SIR was not widely guaranteed after the war. He said, "Ten years ago, the prophets who wished to play it safe declared that atomic propulsion was a full generation away."  And yet here it was 10 years after the war that not only was nuclear propulsion ready for use in ships but also for the commercial sale of electric energy.

AEC Chairman Lewis Strauss was also on hand and observed that the net power being made available to the grid was "five million times the power of Fermi's pile of 12-1/2 years ago."  He also noted that "American companies, and groups of companies, in various parts of the United States, stand ready, as of now, to build six commercial atomic power plants with a total of 765,000 kilowatts and have them completed within the next five years, at a total cost of nearly $250 million." Atomic electricity was on its way, one way or another. He noted earlier electric power production events at the EBR-1 in 1951 and at the HRE in Oak Ridge (March 1953) but added that "Not until today, has a sufficient amount of power been produced as the byproduct of an experimental reactor to make its commercial distribution practical."

Strauss made clear the "swords into ploughshares" as theme of the day when he prepared to initiate the commercial power sale.  "Before me stands a large two-way switch," he told the assembled crowd.  "If I throw its blade in one direction it will turn the propellor shaft of a military weapon."

He went on to say, "But when I throw it in the other direction, as I am about to do, it will send atomic electric power surging through transmission lines to towns and villages, farms and factories -- power not to burst bombs or propel submarines, but to make life easier, healthier and more abundant."

And so, on that day, the first commercial sale of atomic-generated electricity onto a major grid took place.  The event is little remembered today, having been overshadowed by a blizzard of historic atomic "firsts" in that era of rapid and broad investment, research and development.  However, for the Atoms for Peace Manual, it may have been forgotten. Luckily, we have such volumes to help us remember. 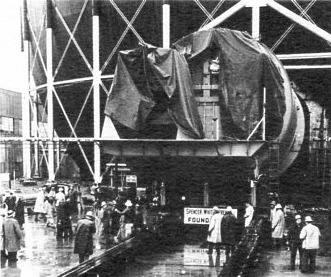 Inserting the simulated submarine hull into the SIR prototype sphere; from a GE / Knolls Atomic Power brochure in Will Davis library.

Will Davis is a member of the Board of Directors for the N/S Savannah Association, Inc. He is a consultant to the Global America Business Institute, a contributing author for Fuel Cycle Week, and he writes his own popular blog Atomic Power Review. Davis is also a consultant and writer for the American Nuclear Society, and serves on the ANS Communications Committee and the Book Publishing Committee. He is a former U.S. Navy reactor operator and served on SSBN-641, USS Simon Bolivar.