The New Nuclear Era, It’s Not What You Think

A wide range of engaging speakers from variety of nuclear companies, start-up initiatives, and government agencies participated in the fourth annual Advanced Reactors Technical Summit IV & Technology Trailblazers Showcase. It was comprised of nuclear industry who have improved upon engineering in many areas and have a strong knowledge of what technical and political problems need to be addressed. They came together to help bring ideas to overcome some of the challenges the industry is facing and are making progress on future concerns. 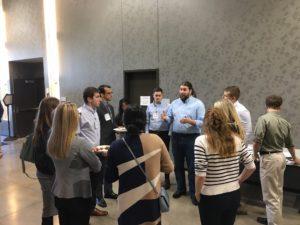 Attendees to the Showcase included students and young engineers who were founders of nonprofits, members of nuclear groups, and activists that are actually engaging people in meaningful discussion about the role of nuclear power in society. Some of the attendees included Sarah Stevenson, president of Kansas State University's American Nuclear Society; Emma Redfoot, with both Mothers for Nuclear and Students for Nuclear; Tay Stevenson, from Generation Atomic; Sydney Weeks from the Nuclear Infrastructure Council; and me, with 5-Minute Nuclear.

The above mentioned are U.S.-based advocates, but what about abroad? There was no shortage of international collaboration at the Showcase, as well. There were students and engineers from India, Ecuador, Lebanon, Costa Rica, Russia, Korea, China, and the U.K. They encompassed everything from engineers at a national lab, doctoral students, and contributors to the aforementioned groups. Jing Hu, the executive secretary for the International Youth Nuclear Congress, invited attendees to the Congress in Argentina in March 2018 to speak on behalf of the new generation in the nuclear industry.

There were also after hours meet-up groups in the evenings, and some hung around to explore Chicago after the summit meeting came to a close.  Wherever you looked, those keen to take on the responsibility as the next generation of nuclear were enthusiastically discussing ideas and sharing information.

How is all of this important, you may ask? Although, nuclear energy has touted its benefits through statistics and hoped those would sway people, the reality is that the public perception of nuclear is just not very good. There are still those, and will always be those, opposing the world's cleanest source of energy. They misconstrue facts in ways that scares people and drowns out the reality of the science. They've been so effective in their negative communications that nuclear power plants have been prematurely shut down, and we simply can't let that continue. Once we saw that there were multiple groups in attendance, we beamed the bat signal and teamed up to fight against the misinformation and fear. 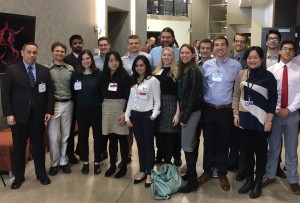 The future of nuclear

How did all of these students manage to come together to meet? Rachel Slaybaugh of the Nuclear Innovation Bootcamp and Canon Bryan of Terrestrial Energy saw the need for, and were responsible for, this gathering of the minds. Rachel and Canon are always pushing forward to pave the way for new technology.

So, we are now taking it upon ourselves to creatively reach out to the public in new ways about nuclear. In doing so, we made sure our goals and methods were clear to each other, established periodic check-ins to keep us on track, coordinated our efforts, and aligned with changing policies.

In the end, we walked away knowing that we were fighting the same fight. One that needs to be resolved sooner rather than later. While some may be new to the fight, it doesn't mean that they are not capable and tenacious. We understand that there are the naysayers that repetitively say that "it can't be done" or "it's too hard to change public opinion," but we're moving forward with an energy that even nuclear can't match. As one of the speakers at the conference said, "Those who say it cannot be done should not stand in the way of those doing it."

The reason that we are able to keep going and drive on, even in the face of insurmountable odds, is that we are more than just colleagues who Skype to keep tabs on one another. We have created friendships and gotten to know one another. We bring lessons learned and share information freely with one another because we know we are in this fight together. Gone are the days of bickering over target audiences, holding onto insights for a fee, and hamstringing ourselves. We want everyone to hear our messages about nuclear energy loud and clear.

We aren't just trying to save a nuclear plant here or there. We're trying to ensure that every generation, current and future, always wakes up to a world that is better than yesterday's. Each and every one of us are willing and able to share our stories and passion with you. We're just a few clicks away.

Alec Herbert is an Army Ranger turned Nuclear Engineering student at Georgia Tech. Director of Media and Government Outreach for 5-Minute Nuclear. Just wants to show the world what nuclear energy can really do for them.