Today's Nuclear Matinee is a video from Argonne National Laboratory remembering the startup of the world's first atomic chain reacting pile on December 2, 1942 in Chicago, IL.  It was the first nuclear reactor constructed and operated anywhere by man. Enjoy the video.

The Chicago Pile 1, whose original name was either the University of Chicago Atomic Pile, or sometimes the Chicago Chain Reacting Pile, was the first nuclear reactor anywhere to achieve criticality and was the culmination of over a year of intensive research.

Although experimental data and calculational tools were inadequate in 1940 to attempt any sort of reacting structure of any sort, even a subcritical one, by early to mid 1941 it was decided to construct an experimental uranium-graphite lattice to see if a multiplication factor could be estimated for a theoretical "infinite lattice" of the same general structure.  The idea was to construct a lattice only about 20% or 25% of the size that would be able to attain criticality.  This test setup was constructed in mid 1941 at Columbia University; apparently insufficient results from this test led to construction of a larger lattice in September 1941 at Columbia from which useful figures were obtained.  By May 1942 the lattice had achieved a multiplication factor of 0.98.  Again, these devices were not able themselves to sustain a chain reaction because of their subcritical size, but they had provided the information Fermi and his team needed to build a chain reacting pile. 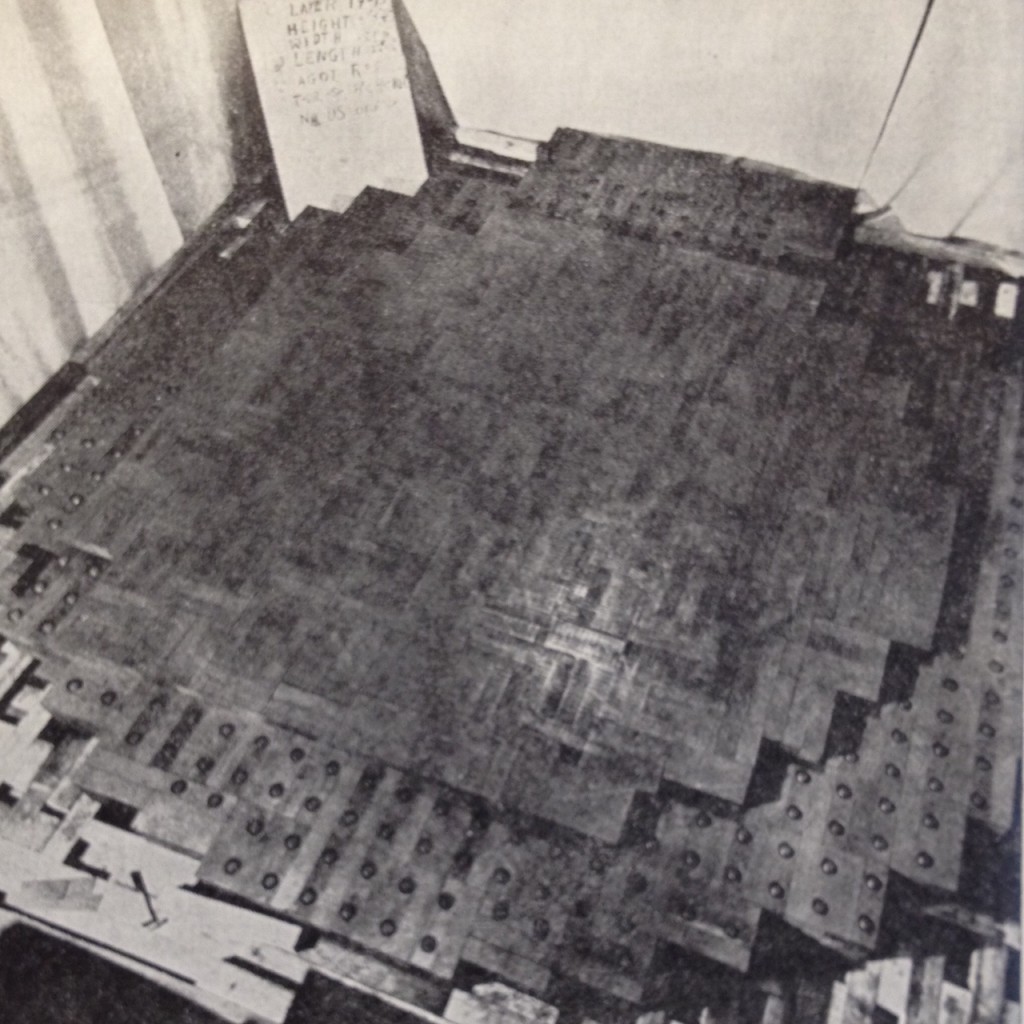 CP-1 under construction. Pile is built up to 18th layer fully across, which contains fuel and partially constructed on top of that is the 19th layer which contained only graphite. From Nuclear Reactor Engineering, Glasstone / Sesonske, Van Nostrand Reinhold 1967.

Although methods of obtaining pure enough uranium and graphite seemed at first daunting, these had largely been solved by late 1942 by tremendous effort on the part of a number of groups, specifically Iowa State University.  Fermi's plan was to construct a roughly spherical uranium-graphite lattice using graphite bricks and both uranium and uranium oxide fuel spheres or lumps; since these would be all stacked or piled up layer by layer, the term "pile" or "atomic pile" was born.

As the pile's construction progressed in late 1942 measurements showed that the multiplication factor was increasing faster than had been anticipated.  It was realized that the critical size of the reactor would come before the completion of the planned configuration; this resulted in the pile's distinctive and somewhat "unfinished" look as seen in illustrations. 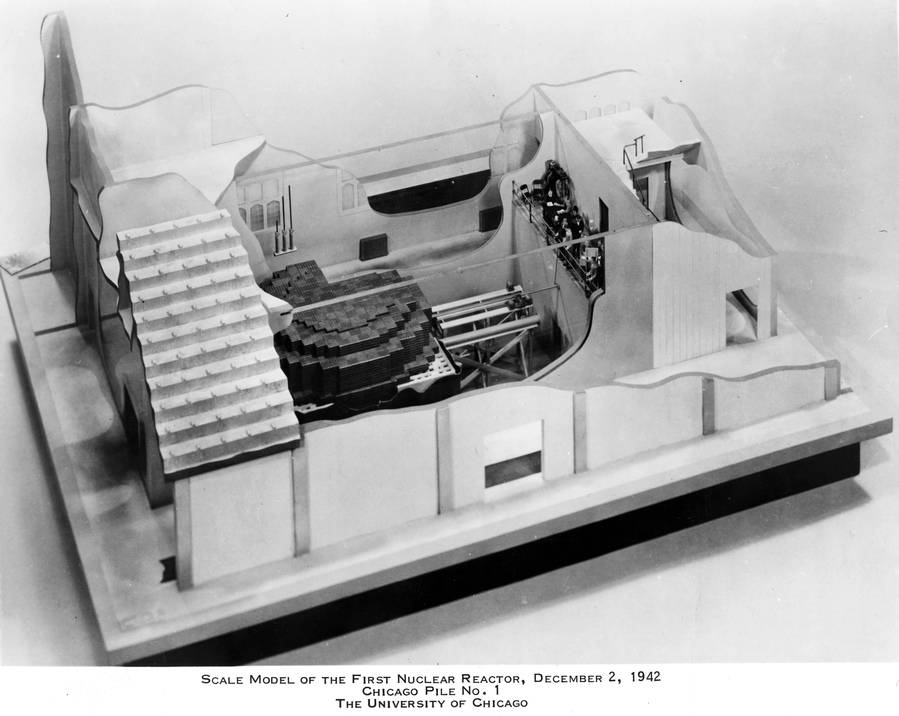 Model of CP-1 as built under stands at Stagg Field, with no shielding and no cooling system. Courtesy Argonne National Laboratory.

As work progressed on the pile, slow removal of cadmium strips in the pile helped reveal the pile's proximity to criticality, as the number of neutrons leaking out was marked by a born trifluoride detector.  Finally, at 3:25 PM on December 2, 1942, the pile was large enough that pulling the cadmium caused an increase in the neutron detection rate - and the rate kept going up with no further actions taken.  The Chicago Pile had achieved criticality. 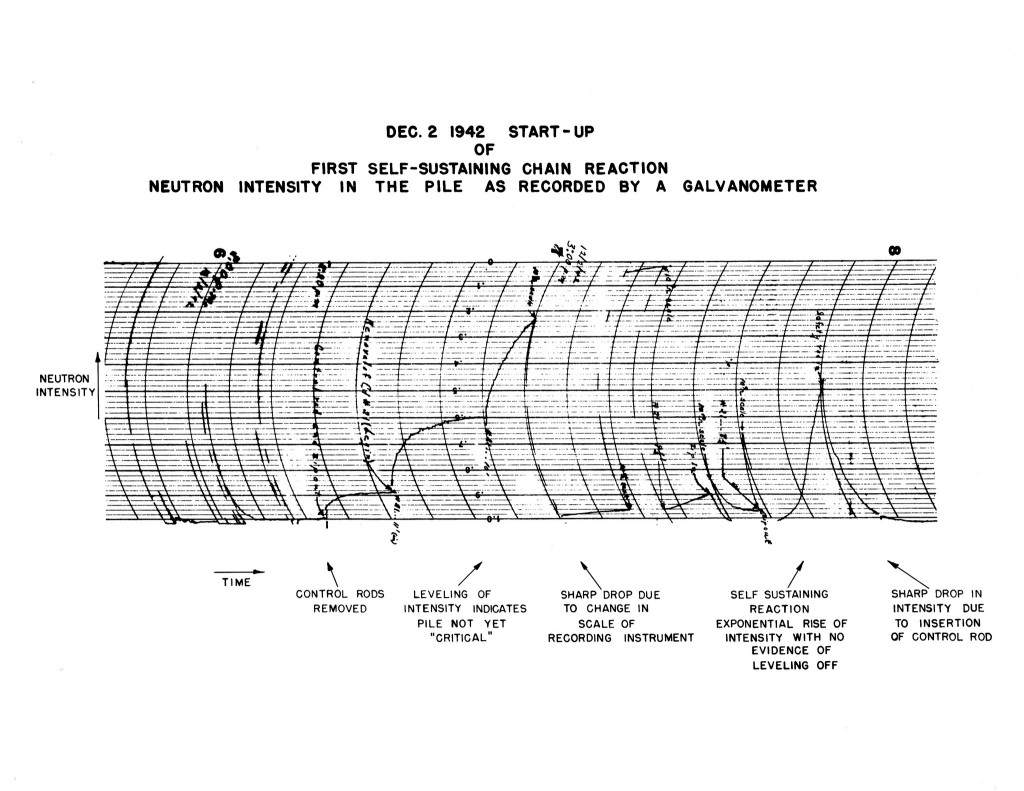 Fermi initially tested the pile at a power output of roughly half a watt, although by December 12 the pile was being tested at 200 watts.  It was decided that in order to safely operate this pile at this power, it needed to be shielded and needed to be moved further from a highly populated area.  Thus, the historic pile was carefully dismantled in the spring of 1943 and was rebuilt, in a slightly different configuration and with heavy shielding, at a site that then was known as Palos Park, which later became the Argonne Site A.

Eventually in the 1950's the rebuilt pile -- now called CP-2 -- and other facilities at that site were no longer needed.  They were dismantled and buried there, where they remain today.  The remote location is marked by a rock with a historic inscription plaque; sampling wells are here and there, as more than one cleanup has occurred later at the site.

The impact of Fermi's experiment (which by the way included Walter Zinn, later to become the first President of the American Nuclear Society) cannot be underestimated.  By 1944 a workable weapons material production reactor had been built at Hanford, Washington; other reactors were constructed and by 1946 Oak Ridge was ready, it said, to design and build a pile that could produce commercial electricity.  By 1947 the US Navy had two contracts in hand for design and construction of nuclear power plants for submarines.  Fermi and his team of scientists had, while standing on the shoulders of giants, become giants themselves.

(Will Davis for ANS Nuclear Matinee)