by Gene Grecheck and Brett Rampal

If you think someone else is going to stop nuclear plants from closing, it's time to take off the blinders and take action. That was the message being touted during the #SavetheNukes Summit in Chicago on October 22-24, organized by Environmental Progress with the American Nuclear Society (ANS) Young Members Group (YMG), among others.

The summit was not held in Illinois by coincidence. After success in New York, those who were involved in the passage of the Clean Energy Standard and associated Zero Emissions Credit that saved the Fitzpatrick, Ginna, and Nine Mile Point plants felt invigorated to bring the fight to the next battlefield. 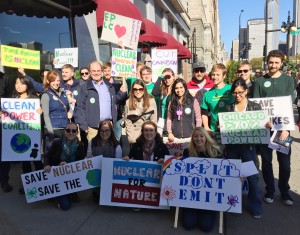 Moving and inspirational are not usually the words used to describe nuclear meetings, but the understanding in the room was that time is short, and we need unity, organization, and fast action to save Exelon's Clinton and Quad Cities nuclear plants,, which are slated for closure (or as one summit attendee put it, abandonment). Without the Next Generation Energy Plan that must be passed by the Illinois legislature in November  (just three weeks from now), the abandonment of the Clinton and Quad Cities plants would result in the loss of over 20 percent of Illinois' clean energy and approximately 1,500 jobs!

If it passes with the nuclear component intact, the plants will get the small price support necessary to remain competitive in a market flooded with cheap natural gas and subsidized wind and solar.  "This is just smart energy policy," said ANS member Lenka Kollar, who was representing the International Youth Nuclear Congress (IYNC) at the summit. "Keeping these valuable assets online is crucial for mitigating climate change and ensuring energy security for the future." 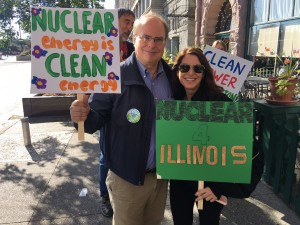 The summit was intended to motivate everyone in attendance to reach out to their networks of colleagues, friends, and family and get them to take action. After hearing about some lessons learned from other powerful and successful social movements (woman's suffrage, gay rights, AIDS, etc.), summit attendees universally agreed that drastic and novel action was needed and could help us achieve our goals.

Everyone reading this article needs to take this message to heart and use social media to flood Illinois legislators with messages about the critical importance of both the Clinton and Quad Cities plants in terms of maintaining Illinois' position as a clean energy leader. It is particularly vital that those who live in Illinois send letters and op-ed pieces to their local newspapers, and blast supportive messages out via their social media. Direct communication from ANS members in Illinois to their legislators is especially important to make the needed legislation possible. Don't let the legislators only hear from the fossil energy interests and the tired old anti-nuclear arguments. 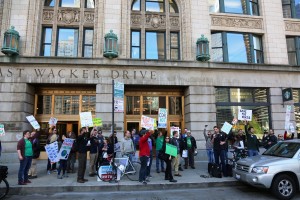 Marching in front of the ELPC office on Wacker Drive.

And we also marched!  On October 24, nearly 50 nuclear advocates carried signs through the streets of downtown Chicago to bring attention to need for clean nuclear energy in Illinois. Mothers for Nuclear representatives were on hand to share their fantastic stories and perspectives, which resonated with everyone.

Our passionate band of environmentalists, students, nuclear engineers, authors, and others marched to enthusiastic responses from passersby. As we walked to our first destination in front of the Invenergy office on Wacker Drive, people accepted the flyers we handed out, signaled thumbs up, and cheered us on! Invenergy is a fossil energy company that provides funding to the Environmental Law and Policy Center (ELPC), which has been lobbying against nuclear. We pointed out the irony that a group claiming to be interested in the environment was actually promoting the loss of a quarter of Illinois' clean energy, and replacement of that energy with natural gas.

We walked on to the sidewalk in front of the ELPC building, where we met a small (3-4 people) band of anti-nuclear activists wearing yellow shirts and carrying signs. They were no match for our large group! The police escorting us told them to keep their distance, which they did, as we were allowed to march in a circle on the sidewalk, and listen to some of our group members speak. People continued to walk by and ask us questions. Some stopped to learn more, while we heard cars honking their support throughout the day as well (despite a Chicago ordinance against honking). 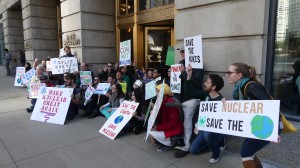 Pronuclear rally in front of the ELPC office on Wacker Drive.

The contrast between the handful of anti-nuclear activists and our #SaveTheNukes group could not have been more striking.  They talked about fear, terrified about imaginary dangers that they could not describe.  Our group focused on the future:  a future where clean energy is plentiful, and fossil emissions have been eliminated.  A message of hope, not fear.  The path to that future needs nuclear: Keep the operating plants, build new ones, and move forward on advanced technologies to even better address the energy needs of the world.

If you have never considered actively advocating for nuclear energy before, we urge you to do it now. And we do mean NOW. Today. Before we lose two more large sources of clean energy and reverse any efforts to improve our air quality. Thank you for your action! And be sure to tag @ans_org and @ans_YMG on Twitter! 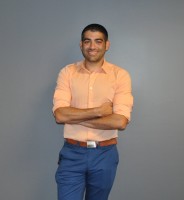 Brett Rampal is the current Chair of the American Nuclear Society's Young Members Group (YMG), sits on many ANS national committees, and has been active in nuclear advocacy and awareness for the last 10 years. Brett works for NuScale Power, LLC in Charlotte, NC, as one of the staff core designers.