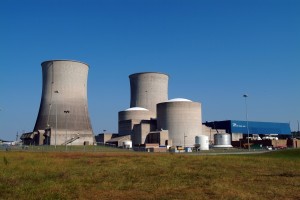 On May 26, 2016 at precisely 2:16 a.m., what will probably be the final large unit in the Tennessee Valley Authority (TVA) nuclear fleet - Watts Bar Nuclear Plant, Unit 2 - achieved its initial criticality.  This event opens the final chapter of the extended construction history of this unit, and paves way for another gigawatt of generating capacity (in nameplate rating) to be added to TVA's generating portfolio.

Much news has been made of the protracted construction process of this plant, which was ordered in August of 1970.  Due to the fact that the predicted increase in demand for power did not occur, TVA decided to slow down the progress of the plant during construction. While a number of plants were cancelled, Watts Bar continued along in construction at a pedestrian speed.  Unit 1 was not placed into operation until 1996, and Unit 2 was essentially mothballed.

Not until April 2012 did TVA decide to complete Unit 2.  From there, work proceeded at a deliberate pace, and was prioritized over the incomplete Bellefonte Nuclear Plant (which is now cancelled).  By December 2015 the reactor was ready to receive fuel for the first time, setting the stage for this month's notable achievement - the first criticality.  (This simply means that the reactor was made to sustain a nuclear chain reaction.)

Much other work has gone on at the site as well -- Watts Bar was the first US nuclear plant to complete the mandated post-Fukushima modifications (the "FLEX" program) and pass NRC inspection.

With the initial startup of Unit 2, a (so far) 46 year history of the Watts Bar site will finally culminate into a two-unit plant, as originally intended.  TVA takes justifiable pride in describing Unit 2 as "the nation's first new nuclear unit in the 21st century," and historically this marks the last incomplete nuclear unit in the United States left from the "First Nuclear Era" which has any chance of being completed.  A chapter in history has closed, and another has opened!