In the 1960s, the United States Atomic Energy Commission (AEC) carried out a fairly large number of investigations into the use of nuclear energy for purposes other than just the production of electricity. One of the major interests was the use of nuclear energy for desalination of seawater (producing fresh water for people and for crops)-and the studies into this area eventually led to an idea, which may find new interest today. 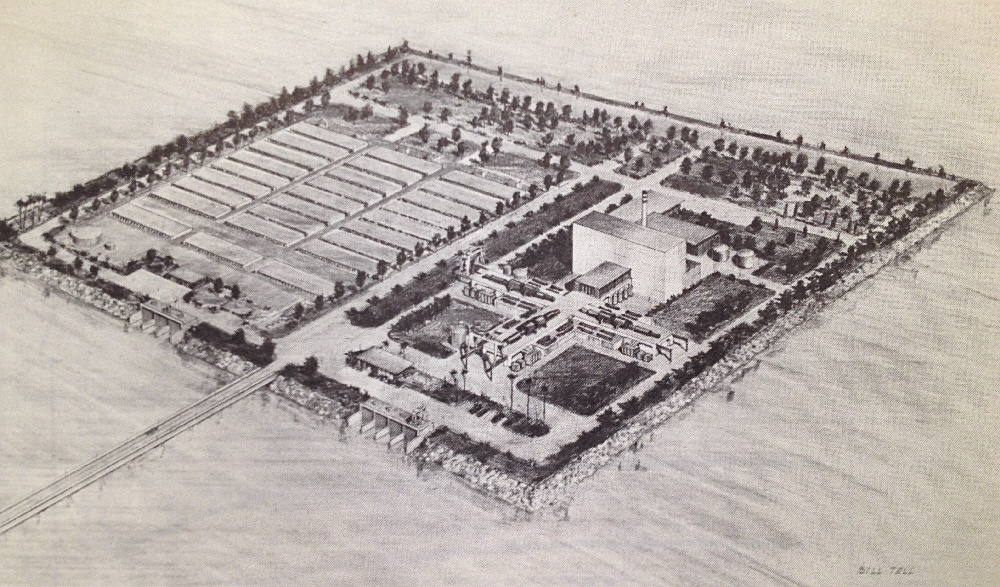 The AEC decided that because land space along the Western coast of the United States-particularly California-was so densely populated, it would be necessary to plan the anticipated nuclear energy and nuclear powered desalination plants as large, integrated sites. Planning them from the outset to incorporate desalination made design development easier, and more importantly better utilized the limited number of sites along California's Pacific coast available for nuclear plants. The Bolsa Island project, which lingered on for many years but was never built, is seen above.

Bolsa Island would have incorporated both a nuclear plant (seen on the right side) with three turbine generators and a large desalination plant (on the left side of the island.) One of the turbines provided electric power for the mainland; the other two provided power for the desalination plant. The exhaust steam of the two used for the desalination plant was also to have been used in that process. The plant would have provided a total of 1800 MWe (with not nearly this much supplied to the grid) and 150 million gallons a day of fresh water. This design is typical of a number planned for various types of reactors and various types of water production plants.

At the same time, the AEC considered the large power demands that desalination would require and asked the major reactor vendors for reports on whether very large reactors in the 5,000 to 10,000 MWt range were feasible. All answered "yes." (These included Westinghouse, General Electric, Atomics International, and General Atomic.)

The integrated site idea-that the whole plant should be developed as a single entity from the outset, making the best use of available but limited land-developed later into a far larger and more ambitious concept called the "Agro-Industrial Park." One scheme for such a facility is shown below, reproduced from the US AEC Report to Congress, 1968. Click to enlarge image. 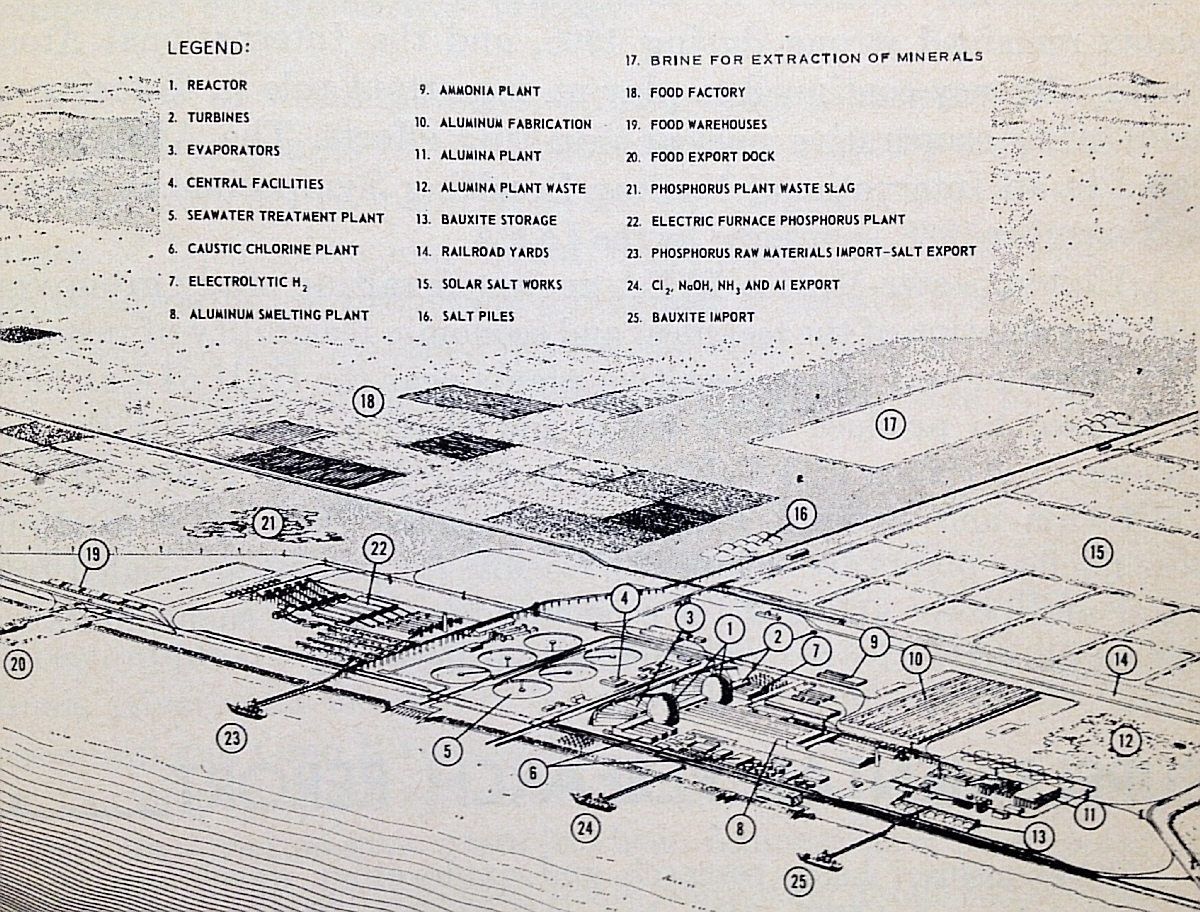 The facility shown here is clearly far larger than the Bolsa Island concept and is on the mainland. This plant was designed to deliver 2000 MWe to the grid, while also producing a billion gallons of fresh water per day. While some of that water was to be delivered for municipal use, some of it was also used on the enormous site in a 300,000 acre "food factory" intended to use intensive farming methods coupled with chemical fertilizers and irrigation to feed an estimated 6 million people. Production of fertilizers was considered either on site or at satellite sites, as was industrial satellite site production of aluminum (smelting) and chlorine.

From the AEC Report to Congress 1968 we also find this: "A typical industrial complex could include interrelated processes for the production of fertilizers, aluminum, phosphorus, caustic soda, chlorine, and ammonia. Agro-Industrial Complexes would be located on the seacoast with large-scale desalting of sea water to support highly intensive irrigated agriculture on a year around growing basis if climate permitted."

Oak Ridge National Laboratory completed a study of this concept in 1968 and, according to the AEC report, "indicated that the energy center concept might have application in several areas of the world," which might have included but not been limited to the Middle East, India, and Puerto Rico.

The modern environmental approach now known as "Ecomodernism," which (perhaps overly simplified) states that man should impact his environment no more than he has to but continue to ensure societal development embraces nuclear power for being energy dense and thus having a small footprint. Moving a large amount of necessary production of energy, water, and food into dedicated centers such as were conceived in the 1960s may find new appeal as man seeks ways to continue to reduce his impact on the environment without giving up an energy intensive lifestyle.

Will Davis is Communications Director and board member for the N/S Savannah Association, Inc. He is a consultant to the Global America Business Institute, a contributing author for Fuel Cycle Week, and he writes his own popular blog Atomic Power Review. Davis is also a consultant and writer for the American Nuclear Society, and serves on the ANS Communications Committee. He is a former US Navy reactor operator, qualified on S8G and S5W plants.