Inexpensive Nuclear Energy - We Did It Before; Why Can't We Do It Again?

Inexpensive nuclear: We did it before, why can't we do it again?

Joseph Romm, editor of the Climate Progress blog and well-known nuclear power skeptic, wrote a May 20 article for the (excellent) Energy Collective website that claimed that nuclear power actually has a negative learning curve with respect to cost. In his article, he presented the graph shown below. The graph (if correct) shows that nuclear's capital costs remained below $2,000/kW even after 1990. Costs then escalated dramatically in the 1990s. Note that the costs are presented in constant (2004) dollars. 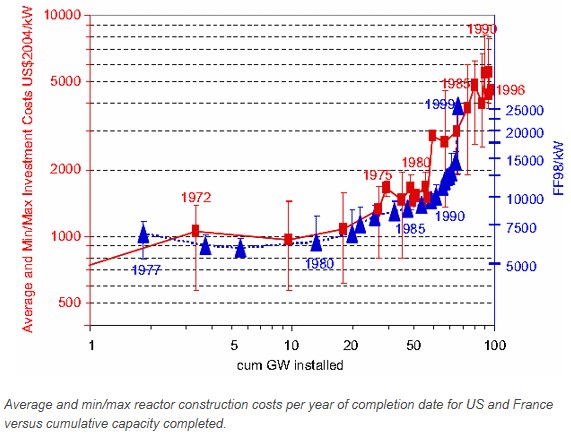 Many have stated that today's new (Gen 3+) reactor designs would lower costs, due to reduced complexity and number of components, etc., but it appears that this has turned out not to be the case. Costs are now more like $6,000-$8,000/kW, i.e., almost three times the ~1990 cost, even in inflation-adjusted terms.

How did this happen? Commenters on the Romm article suggested that he (and others) should not just crow about how nuclear costs have gone up, but ask WHY those costs have gone up. In general, costs of a given enterprise go down with time, due to technology advancements and lessons learned. Nuclear critics like Romm seem to suggest that the industry's escalating costs are somehow due to a unique incompetence that applies to everyone who has worked in this one industry (which seems implausible). Their other suggestion is essentially that nuclear wasn't acceptably safe in the past, and that achieving acceptable levels of safety cause it to be extremely expensive. A quote from Romm's article on the subject:

"A key reason new reactors are inherently so expensive is that they must be designed to survive almost any imaginable risk, including major disasters and human error. Even the most unlikely threats must be planned for and eliminated when the possible result of a disaster is the poisoning of thousands of people, the long-term contamination of large areas of land, and $100 billion in damages."

A different take on Romm's data

It's interesting how different people can look at the same facts/data and come up with an entirely different conclusion. My take on Romm's data is that it is not true that nuclear is inherently expensive (as it is today). Romm's data clearly shows that we can build nuclear at a capital cost of ~$2,000/kW-hr. Why? Because we did it before! The formula for building nuclear at $2,000/kW (in 2004 dollars) is simple:

Same design, same technology, same safety systems, same level of complexity, same regulatory and QA requirements, same procedures, etc. Newer designs and technologies should be considered if, and only if, they do not increase cost. And once built, operate the reactor with the same level of staffing as before 1990.

Were the old reactors acceptably safe?

This is the key question. The position of Romm and other nuclear critics is clear, as suggested by the earlier quote. Objective, quantitative analysis does not support that view, however.

Those old plants churned out a huge amount of power for decades, while not emitting any pollution or CO2. It took a biblical (extremely rare) 9.0 earthquake and 46-ft-tall tsunami to finally "break" one of them and cause a release of significant pollution. With respect to that accident's impact, Romm's characterization of "poisoning thousands of people" is off base, given that experts agree that the accident will have no measurable public health impact. All other impacts, including land being declared off limits, impacts on local food producers, public compensation, cleanup and plant decommissioning activities, etc., can be cast as an economic impact, which Romm correctly states will be on the order of $100 billion.

Thus, the performance of the old ($2,000/kW) plants appears to be an accident once every several decades that results in no deaths or public health impacts, and has an economic impact on the order of $100 billion. Compare this to the record of fossil fueled power generation. According to the U.S. Environmental Protection Agency, coal plants in the United States cause ~10,000 annual deaths and also inflict on the order of $100 billion in annual economic damages (from their pollution). And that's in the United States alone. Worldwide, fossil generation causes hundreds of thousands of annual deaths and inflicts several hundred billion dollars in indirect economic damages, every single year. Given that, how is no health impact (no deaths) and ~$100 billion in economic damage every several decades (vs. every year) not acceptable?

I have to end this post with somewhat of a disclaimer. The post is predicated on the assumption that the ~$2,000/kW capital cost estimates for plants built before 1990, shown in the Romm article, are correct. I've found it difficult to get clear, detailed historical data with respect to nuclear plant construction and operating costs. If any readers have information to the contrary (i.e., that plants built before 1990 cost significantly more than $2,000/kW), I would encourage them to share it.

Jim Hopf is a senior nuclear engineer with more than 20 years of experience in shielding and criticality analysis and design for spent fuel dry storage and transportation systems. He has been involved in nuclear advocacy for 10+ years, and is a member of the ANS Communications Committee. He is a regular contributor to the ANS Nuclear Cafe.