In February, the U.S. Department of Energy finally announced the approval of a federal loan guarantee for the Vogtle-3 and -4 reactor project under construction near Waynesboro, Ga. The approval came after four years of negotiations between the government and the utilities involved in the Vogtle project.

It appears that the Vogtle project will not have to pay a credit subsidy fee for the loan. (The fee is an upfront cash payment made to the government to compensate it for the risk of guaranteeing a loan).

It should be noted that all renewable energy projects receiving similar federal loan guarantees are exempted from paying any credit subsidy fee, regardless of project risk. The appropriate fee for each project is estimated by the government, but the fee is then paid for through government appropriations.

The initial intent of the government was to treat nuclear differently, and to make the nuclear utilities, as opposed to the government, pay the credit subsidy fee. In the case of the Vogtle project, the government did not appropriate money to pay for the fee. Instead, it made a determination that the financial risks were not significant, and that therefore the appropriate fee is negligible.

The situation with the nuclear loan guarantees reminds me of a personal experience I had with a car salesman trying to sell me an insurance program. The insurance would cover any charges I could face when returning the car at the end of the lease (to cover vehicle damage, etc.). The initial offer started at ~$25/month added to the lease payment. As I continued to express lack of interest, the price offered for the insurance dropped dramatically. At one point, the salesman exclaimed, "I can't give this thing away!" Finally, after he offered the protection for less than $1/month, I agreed to it, more out of sympathy for him than seeing merit in the program.

Similarly, the DOE initially asked for a significant credit subsidy fee, but the Vogtle project utilities repeatedly refused to accept the government's offer. The primary reason for the utilities' refusal was that they would have been able to secure private financing, with no government help, under better terms. Contrary to many people's expectations, the nuclear projects had no trouble finding willing, private sources of financing.

In fact, the other new nuclear plant project proceeding in the United States-the Summer project in South Carolina-informed the federal government a long time ago that it would not pursue a government loan guarantee. The reasons it gave were that it was having no trouble finding private financing with equal or better terms, and that applying for the government loan guarantee was not worth the effort.

Even with the Vogtle project, the federal loan guarantee provides very little benefit, and will not significantly reduce overall project costs. The chairman of Southern Company (the primary utility involved in the Vogtle project) estimates a benefit of ~$200 million out of a total project cost of $15.5 billion.

Part of me almost regrets the fact that they finally came to an agreement, and I almost would rather have seen the Vogtle project proceed entirely with private financing. That outcome would have helped nuclear advocates' arguments overall.

The fact that the loan guarantee was granted with no credit subsidy fee helps the antis' arguments even more, as they can characterize it as an unnecessary subsidy to a mature industry. Yes, they will assiduously ignore the fact that renewable energy projects routinely get loan guarantees with no credit subsidy fee. (Renewable energy projects also often get their production tax credit subsidies in the form of a large upfront, lump sum payment that covers a large fraction of their initial capital cost, a far more beneficial arrangement that no nuclear project could ever dream of.)

As for the federal government (i.e., the Obama administration), the reason why it finally agreed to waive any credit subsidy fee (in my opinion) is that it desperately wanted to chalk up at least one "win." That is, it wanted to demonstrate that it does support nuclear, and it didn't want to admit that the nuclear loan guarantee program was a total failure.

If no loan guarantees were granted, however, both the projects would have proceeded anyway, and there would have been no significant financial impact. That would have allowed nuclear advocates to argue that nuclear projects (in regulated markets, at least) did not need such loans, and that there were no associated subsidies. It would have largely eliminated the attacks the projects are receiving from the right side of the political spectrum, from groups like the Tea Party and Taxpayers for Common Sense.

It's clear that nuclear projects in regulated (rate base) markets, like those prevalent in the southeast United States, do not need loan guarantees. They are not even significantly benefited by them. However, it also seems clear that in unregulated electricity markets, any new nuclear plant project would need a loan guarantee, as the financial risks are much higher.

The government offered loan guarantees to plants in unregulated markets, but the credit subsidy fees demanded by the feds were so high that it resulted in the cancellation of projects.

What the government should do is treat nuclear projects the same way it treats renewable energy projects, and not apply any credit subsidy fees. Would that be a subsidy? Yes. Sources of clean energy, such as new nuclear, should receive subsidies, given the fact that government policies continue to apply no financial disincentive to emit CO2 or other pollutants. If renewable energy projects receive such subsidies, non-polluting nuclear projects should receive them as well.

The argument that all non-emitting energy sources should be treated equally is an emerging theme that needs to be communicated to policymakers by the American Nuclear Society and the nuclear industry in general. This message is becoming even more important in the context of the U.S. Environmental Protection Agency's new CO2 emissions reduction policies, allowing states to choose how to reduce emissions. Many states may be open to policies that treat nuclear and renewable sources equally. The industry needs to make the case to policymakers in those states. 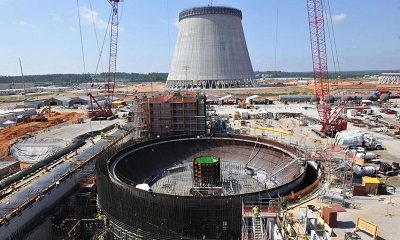